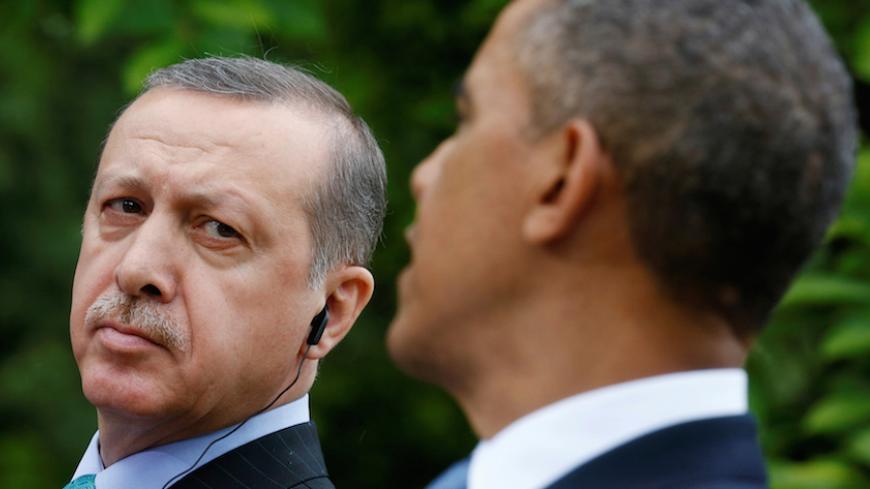 US: Erdogan's claims are "ludicrous"

Turkish President Recep Tayyip Erdogan’s frustration over his failed and costly Syria policies ventured into the bizarre when he claimed he had “confirmed evidence, with pictures, photos and videos” of the United States providing support for the Islamic State (IS), the Syrian Kurdish Democratic Union Party (PYD) and the PYD’s armed wing, the People’s Protection Unit (YPG).

Semih Idiz provides the background for Erdogan’s outburst: “The United States initially provided air support to Turkish forces and the FSA [Free Syrian Army] as they moved against IS in the towns of Jarablus and Dabiq, which were captured with relatively few casualties. The US military announced in November, however, that it was not participating in Turkey’s operation in al-Bab. This announcement came after Turkish forces started bombing YPG positions around al-Bab. In August, the town of Manbij was captured from IS by the US-backed Syrian Democratic Forces (SDF), which is comprised mainly of YPG fighters. Erdogan’s determination to move on to Manbij appears to be another reason why the United States is reluctant to help Turkey in al-Bab. According to the perplexing scenario put forward by Erdogan, Turkey’s aim is to capture al-Bab before the YPG, rid Manbij of YPG fighters and work with the US-led coalition to liberate Raqqa from IS, after convincing Washington to dump the YPG. How it plans to achieve all of this on its own is not clear.”

Although on Dec. 27, State Department spokesman Mark Toner ridiculed Erodgan’s charge as “ludicrous,” he nonetheless felt obligated to add the usual bromides that “Turkey is a NATO ally and a strong partner in the anti-[IS] coalition. I certainly don’t want to give the impression that we’re trying to send a message.”

This column asked back in May whether the United States and Turkey can “keep up appearances” in Syria as relations plummeted. It is worth asking so again, in this last column of 2016.

In addition to the seeming unbridgeable differences over Syria, US-Turkey bilateral relations are also clouded by conspiracy theories in some Turkish circles that the United States was somehow involved in the attempted coup in July, fueled by the American refusal, to date, to extradite Fethullah Gulen, who the Turkish government has claimed was behind the coup.

Sibel Hurtas reports this week on the draft report of a Turkish parliamentary commission empaneled to address the causes and consequences of the failed coup in July 2016.

Perhaps not surprisingly, the draft appears to reflect the heavy hand of the ruling Justice and Development Party (AKP), with many questions left unanswered.

Hurtas writes that the draft report “echoes the party’s strategy to water down its responsibility for the Gulenist entrenchment in the state. It asserts the Gulen community was strengthened by all the governments that preceded the AKP since the 1970s. The report claims the Gulenists were backed by the MIT [National Intelligence Organization] as well as the United States and the CIA. The relationship between Gulen and the United States is discussed at length, including claims that children of US President Barack Obama’s relatives in Kenya had been admitted free of charge to Gulenist-run schools in the African country. The only mention of the AKP’s own ties with Gulen is limited to a statement that Gulen sought to project an image of someone close to the government after the AKP came to power in 2003. Yet the report contains some scandalous admissions as well. The main financial sources of Gulen’s organization, for instance, are listed as government incentives, public tenders and municipal grants. Many public tenders are said to have been awarded to businesspeople who paid racket money to Gulen. According to the document, Gulen’s followers, who used to be called ‘the community,’ should be defined as a ‘terrorist organization’ after 2013, when Erdogan and Gulen fell out. This definition is the main argument that could help the AKP save its skin in the upcoming trials.”

Ali Hashem reports this week that despite the costs of the campaign in Aleppo, Iranian leaders feel vindicated by the Syrian regime’s victory.

Iranian President Hassan Rouhani, following a telephone call with Russian President Vladimir Putin on Dec. 25, said, “This victory sent the message to terrorists that they cannot achieve their goals," and backed the forthcoming Syrian political negotiations in Kazakhstan.

Explaining the high costs for the campaign, Hashem writes, “Over four years of fighting in Aleppo depleted the Iranian-led axis more than clashes in any other area in Syria. Without any accurate count, it is enough to say that hundreds of pro-Iranian fighters were killed in the battles; among those who died were high-ranking officers in both Iran’s Islamic Revolutionary Guard Corps and Hezbollah.”

Hashem adds that Iran and its allies also capitalized on the shifting international and regional context regarding the war in Syria. “To the coalition fighting on the side of [Syrian President Bashar al-] Assad, there were no concerns about game-changing decisions with respect to the international community. The United States is busy with the presidential transition and about all it could do was issue statements of condemnation. Turkey is on bad terms with the West and has started investing in new relationships with Russia and Iran; this brought about the possibility of involving Ankara in the final solution to the Aleppo dilemma and later in efforts to reach a nationwide cease-fire that could help stabilize the situation. On the opposition side, the same givens clearly mean that a defeat in Aleppo will have dire implications on the status and morale of Syrians opposed to the regime. Regional countries backing the opposition kept their distance while waiting to see what the new administration in Washington was going to do in terms of the Syrian crisis. This doesn’t mean a total withdrawal from the scene, but rather that there is a moment to reassess and later decide whether to be part of an overall strategy or to start a separate strategy.”

Adnan Abu Amer writes that Iran-Hamas ties, already strained, are likely to worsen after Aleppo. Hamas has backed armed groups battling Syrian government forces and has been investigating the Iran-linked Harakat al-Sabireen Movement for Supporting Palestine in Gaza. Hamas receives some funding from Iran, but ties have soured over Syria.

Hashem concluded that the next steps in Syria may include increased progress toward a diplomatic settlement. “It seems more likely,” Hashem writes, “with Turkey, Iran and Russia unifying efforts, that the new chapter might involve more words and fewer bullets, where politics will be the tool to transform the anti-Assad struggle into a much weaker insurgency. Assad perhaps should thank his adversaries — inside and outside Syria — for having been so divided in a battle that seemed, at the beginning, to have been a rare opportunity to unite all those against him.”