Egyptian President Abdel Fattah al-Sisi has announced his support for the Syrian army, while the media have reported that Egypt has elite forces on Syrian soil. 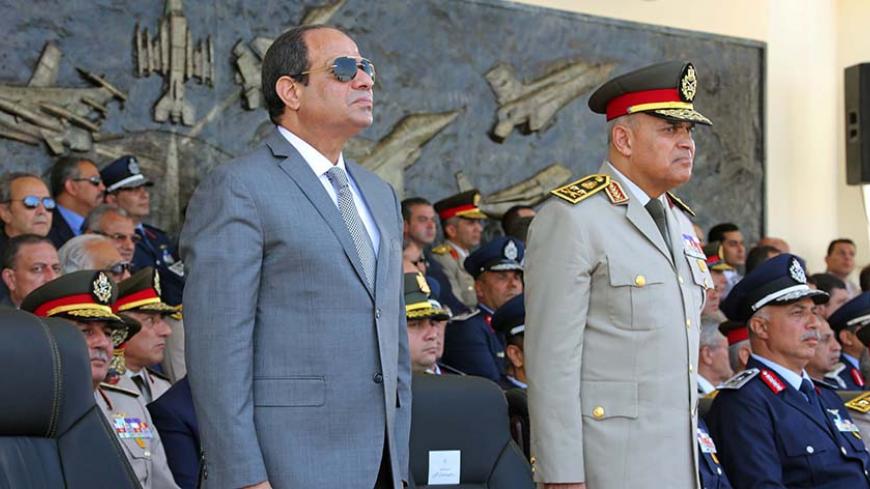 CAIRO — “Supporting national armies” is the slogan Egypt is using to promote its policy on issues across the region, first and foremost in Syria.

This became evident when Egyptian President Abdel Fattah al-Sisi announced his country’s support for the Syrian army during a Nov. 22 TV interview with Portuguese news channel RTP. Two days later, on Nov. 24, Lebanese newspaper As-Safir published a report claiming that an Egyptian contingent of 18 helicopter pilots and four major generals had been stationed at the headquarters of the Syrian General Staff in Damascus for the past two months.

The article quoted Syrian Foreign Minister Walid Moallem as saying on Nov. 20 that there had been “progress” in the way Egypt talks about Syria, and that the two governments’ views on the Syrian crisis were closely matched.

The As-Safir article sparked controversy over the presence of Egyptian soldiers on Syrian soil.

The Egyptian media are trying to promote Sisi’s policy on Syria as that of a military man supporting national armies, arguing that he cannot possibly give support to the armed opposition.

Russian daily Izvestia and Iran’s Tasnim News Agency also confirmed reports of Egyptian troops on Syrian soil. The Kremlin, however, said it had no information on Egyptian military involvement in support of the Syrian army.

The Egyptian Ministry of Foreign Affairs also denied the reports. “It is clear to anyone why these rumors are being spread,” it said in a statement Nov. 28, without further explanation. It added, “There are constitutional and legal measures that must be taken before Egyptian soldiers or military hardware are sent outside state borders.”

Journalist Mohammad Ballout, who wrote the As-Safir article, said Egyptian troops in Syria were not fighting on the front lines. Ballout, who lives in France, said in a telephone interview with Al-Monitor that recent Egyptian-Russian military exercises resemble operations currently underway in Syria.

The Lebanese writer noted that Egypt was using Beirut as a base for closely monitoring developments in Syria, as indicated by the September appointment of a new ambassador to Lebanon, Nazih al-Nagary, who previously led the Egyptian delegation to the Geneva negotiations on the Syrian crisis.

Ballout refused to name his sources for the story and declined to say whether they were military or civilian.

The Egyptian military’s spokesman, Brig. Gen. Mohammed Samir, refused to comment on reports that Egyptian troops were present in Syria, but cited denials by the Foreign Ministry. Samir told Al-Monitor that the Ministry of Defense had no authority to approve sending Egyptian troops abroad, which is a matter for parliament to approve.

Maj. Gen. Yahya al-Kedwany, the commissioner of the Egyptian parliament’s Committee for Defense and National Security, told Al-Monitor that sending Egyptian troops to Syria would only take place under the auspices of the United Nations. Kedwany ruled out any Egyptian participation in field operations on Syrian soil.

He said there was ongoing coordination with the Syrian regime as the country’s official, elected government, and added that Egypt did not recognize any armed opposition group.

Kedwany also hinted that Egypt had intelligence agents in Syria and Iraq, as events in both countries have implications for Arab national security.

He said that Egypt’s security services were working with their Syrian counterparts on an ongoing basis to examine reports that a growing number of Egyptians are fighting in Syria alongside the armed opposition.

It is worth noting that on Oct. 17, Cairo hosted the first public visit by a Syrian security official to Egypt after an official invitation from the Egyptian leadership. Egyptian state media were silent on the visit, but Syrian state news agency Sana reported that Ali Mamlouk, the head of Syria's National Security Bureau, met with senior Egyptian security officials, including Maj. Gen. Khaled Fawzi. No further details of the visit were disclosed.

Al-Monitor asked Brig. Gen. Samir Suleiman, the head of the Syrian army’s media branch, whether Egyptian troops were present on Syrian soil. “I don’t want to comment on that, and I will leave it to the Egyptian side,” he said.

Speaking by phone from Damascus, he said any Egyptian involvement in Syria was a political issue, not a military one, noting that relations between the Egyptian and Syrian armies are strong.

“We are working together to fight terrorism and we hope to develop our cooperation, both political and military,” he said. “Talk of an Egyptian military presence [in Syria] at this time is at an advanced stage.”

During his interview Nov. 22, Sisi called for support for national armies in Syria, Iraq and Libya so they could regain control and impose stability across their national territories.

In October, Egypt voted in favor of two UN Security Council resolutions: one French-backed resolution calling for an end to fighting in Aleppo, and the other a Russian resolution opposed by Saudi Arabia and the Gulf states.