To woo Trump, will Kremlin show restraint in Syria?

Russian officials do not expect President-elect Donald Trump to roll over for President Vladimir Putin and are pondering a wide range of options the new US leader will present on the Middle East. 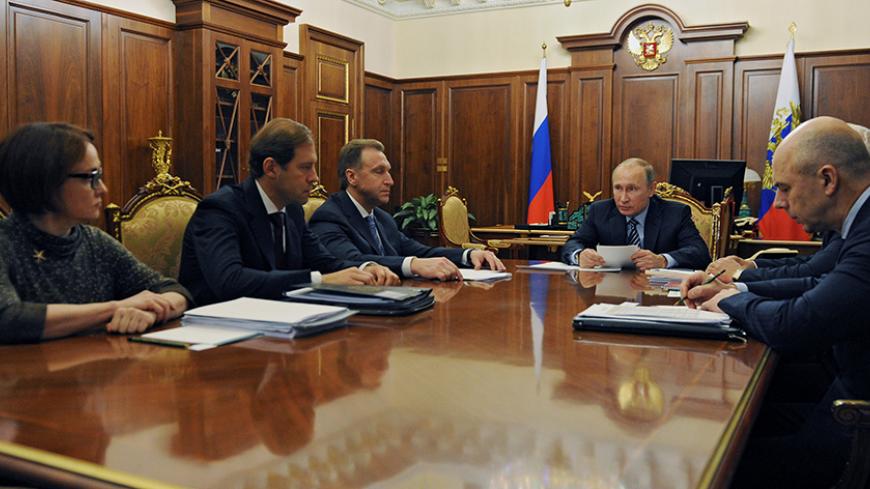 The first phone conversation between President Vladimir Putin and President-elect Donald Trump took place on Nov. 14. The official press release read, “Putin and Trump agreed that the current state of US-Russia relations is unsatisfactory and agreed to actively work toward their normalization and constructive cooperation on a broad range of issues.” It also stated that both parties emphasized the need to “return to a pragmatic, mutually beneficial cooperation that meets the interests of the two states as well as stability and security in the world.”

For some, the tone of the conversation as well as its underlying message inspired hopes for a renewal of the relationship between Moscow and Washington; for others it was an embodiment of the worst fears associated with the “Trump-Putin tandem.” Until now, most assessments of Trump’s possible presidency were that as an amateur in international politics, Trump would inevitably be outfoxed by Putin, based on Trump’s positive remarks about him.

These statements, however, should be seen in a specific context, which was Trump’s criticism of what he perceived to be Obama’s inaction and weakness. To assume that this would mean that Trump would be obedient to Putin is a fallacy. Rather, Trump’s expressions of respect for Putin betray an ill-concealed desire to follow the Russian president's example as a decisive and tough leader. Given that Trump is known as a tough negotiator, Moscow doesn’t expect that dealings with the United States in Syria or elsewhere will be as easy as they have come to be portrayed.

In his own personal letter to the US president-elect, Russia’s leading foreign policy analyst, Fyodor Lukyanov, attempted to draw Trump's attention to two important things: “First, in 'big politics' a lot can be bargained — but not everything. Second, while businessmen may choose to change partners if they don’t like doing business with them, politicians cannot. There’s simply no place else to go.” Even if the first contact between Putin and Trump brings hope for a positive change, a lot will depend on how Trump is to digest and follow this philosophy through his dealings with Putin.

On specific foreign policy fronts, Syria is clearly the most daunting problem for the two states in the region at the moment. Both Moscow and Washington continue to support their respective warring parties on the ground and promote seemingly uncompromising narratives. However, problems associated with the post-war Syrian settlement — including a new constitution, the formation of a transitional government and the restoration of the country — ironically offer immense potential for cooperation. It seems that both parties believe that navigating through the military stage of the conflict into the diplomatic realm is a must but until now, there was no visible route. The fact that Putin and Trump, according to the press release, “shared the necessity to unite efforts in the fight against Enemy No. 1, which is international terrorism and extremism” and discussed “issues of settling Syria in this paradigm” seems to offer such a route or at least pave a way for it.

Should Trump indeed decide to focus on the fight against the Islamic State and Islamic extremists in general, it would create some solid ground for cooperation with Moscow. Yet his actual policy may be more nuanced, and at this point the equation has many unknowns, especially given genuine opposition to such cooperation within the Pentagon. Changing this situation is a serious challenge, and the key question people in Moscow are asking these days is: Given that Trump is hard pressed on every side already, will he be forced to compromise his position on Russia for the sake of a “deal” with the Washington establishment — including his own party, where the level of antagonism vis-a-vis Moscow is high? Or will he remain determined to fix the relationship with the Kremlin — albeit for the pragmatic reasons of safeguarding US national interests as he sees them?

For now, Moscow will try to reinforce Trump’s vision at the international level. For the last couple of months, Moscow has been bracing for the worst-case scenario of what might have been President Hillary Clinton’s policies — namely the potential introduction of a no-fly zone in Syria and increasing financial, military and political support for the Syrian opposition. Now that this scenario seems to be off the table, Russia may choose to lower its deterrent capabilities as a bargaining chip or even as a concession toolkit. So far, the pattern that has been crystallizing is that the Kremlin wants to send all kinds of positive messages to the US president-elect by dramatically decreasing its military strikes, by not responding to what until recently would have been considered NATO provocations and by tempering anti-American rhetoric. The current Russian criticism against the United States by and large targets US elites — not America as a country or even as a state.

If prospects for cooperation on Syria look more promising now, other fronts may be more complicated. One of the most underestimated tracks in the Middle East might be the coming tug-of-war over Iran. Russia's tactical alliance with Tehran on Syria and a relative consensus on a broad regional agenda is a work in progress for Moscow, not a given variable. Trump may be expected to restore the dented relations with Gulf monarchies, even though regional elites are skeptical about such a prospect at this point. Yet the deal with Iran that the Obama administration negotiated is unlikely to be rejected, although there will definitely be an attempt to renegotiate it so that it better favors American and Israeli interests. Moscow will be watching this track and exploring its options in all of this.

The role of strong regional power brokers will increase and so will the need for quality relations with them. Russia has been relatively successful in forging good relations with Egypt, Iran, Israel and — with a mixed record — Turkey. However, Moscow should now be ready to embrace a different reality: Regardless of how regional rulers feel about Trump, there’s a call for a fresh start in relationships with the United States across the region. In this regard, it’s quite symptomatic that Egyptian President Abdel Fattah al-Sisi was one of the first international leaders to congratulate Trump on his victory. Should Trump take advantage of the opportunity to restore US relations with its allies, Moscow may be forced to work out a different type of relationship with these states.

On a bigger scale, Moscow is pondering whether Trump will promote some strategic vision for the Middle East similar to one his Republican Party fellows promoted under President George W. Bush. Moreover, he will face a choice that Clinton also would have had to make had she been elected — does America want a greater political presence in the region, or would it rather minimize its engagement, either for the sake of continuing an Asia-Pacific pivot or to concentrate on US domestic issues? Depending on how these questions are addressed, Russia and the United States could either switch to a cooperative mode or slip back into an adversarial one.

Finally, timing is important. Given that next US election cycle starts virtually the day after the inauguration of the new president, four years in office might too short for Trump to set up the right paradigm for relations with Moscow, while long enough to plunge them further down. Therefore, there are two vital goals for Washington and Moscow. First, their leaders need to create a clear — and realistic — vision of what they would like to achieve within two years, and second, they must preserve a single-minded determination to keep their options open for any opportunities to reduce conflicts that may emerge — such as the ones sprouting up now.