Trump win further distances US from GCC on Syria

The Gulf Cooperation Council anxiously awaits to see how US President-elect Donald Trump plans to deal with the uncertainties surrounding US Middle East policies. 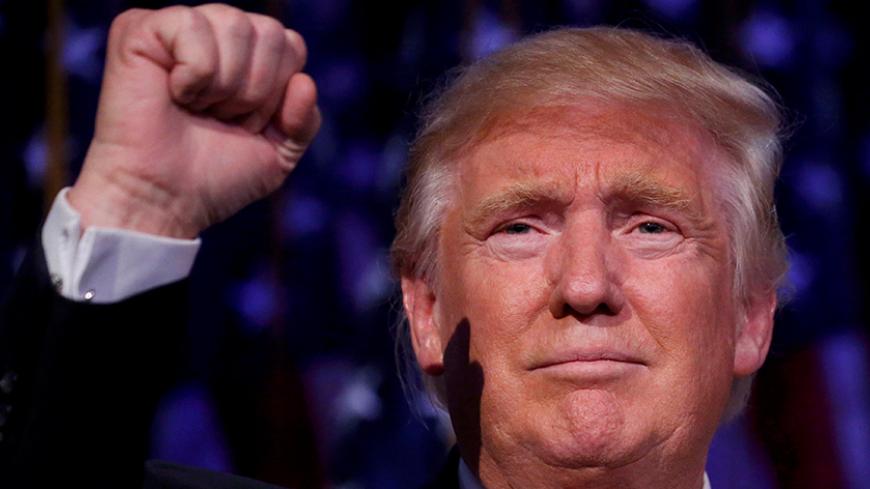 Donald Trump’s historic victory this month shocked many across the world. Gulf Cooperation Council (GCC) officials must deal with countless uncertainties surrounding Washington’s Middle East foreign policy in the post-Obama era. One area of grave concern for Arab Gulf monarchies is Syria, where since 2011 the Saudis and Qataris have invested heavily in Sunni Islamist forces fighting to overthrow Syrian President Bashar al-Assad.

For Riyadh and Doha, the upcoming transition in Washington constitutes a major setback to their interests in this conflict. With Trump stepping into the Oval Office on Jan. 20, the prospects for Saudi Arabia and Qatar achieving their regime change objective in Damascus appear dimmer than ever — and those for Assad’s survival seem stronger than any point since the ongoing crisis erupted almost six years ago.

Although Washington has provided limited logistical and financial support to segments of Syria’s armed opposition while calling for Assad’s departure from power, a major grievance on Riyadh's and Doha’s part has been the Obama administration’s reluctance to take more decisive action against the Damascus regime. On Sept. 20, the emir of Qatar articulated this frustration with America’s outgoing president when addressing the UN General Assembly. “Red lines were set for the [Assad] regime … yet those who demarcated those lines have not felt provoked to raise a finger.” In the eyes of many in the GCC, Obama mismanaged the crisis and enabled Tehran to exploit the conflict for the purpose of expanding and consolidating Iranian/Shiite influence across the Levant.

As many in the GCC expected a Clinton victory, there was optimism that as commander in chief, the former secretary of state would embrace a more hands-on approach to the Syrian crisis, tip the balance of power against Assad in the rebels’ favor and ultimately push back Russia and Iran’s growing influence in the Arab world. Such optimism was justified. According to one of Clinton’s campaign advisers, she was determined to reset Washington’s Syria policy and focus on taking the “murderous” Syrian regime “out of there.” Short of supporting a deployment of US ground troops to Syria, Clinton advocated implementing a “no-fly zone” to build “leverage and momentum for a diplomatic solution that removes Assad and brings Syria’s communities together to fight [the Islamic State].”

Trump, however, has articulated a different plan for defeating IS that entails working with the Assad regime and its backers in the Kremlin. The president-elect has signaled his plan to cut off support for anti-Assad forces in Syria while collaborating with Moscow and Damascus — and unofficially by extension with Tehran — in their fight against the so-called caliphate. Three days after his electoral victory, the real estate mogul told the Wall Street Journal, “I’ve had an opposite view of many people regarding Syria. My attitude was you’re fighting Syria, Syria is fighting [IS], and you have to get rid of [IS].” The president-elected continued, “Russia is now totally aligned with Syria, and now you have Iran — which is becoming powerful, because of us — is aligned with Syria. … Now we’re backing rebels against Syria, and we have no idea who those people are.” If the US military attacks the Syrian regime, “We end up fighting Russia.”

Despite geopolitical constraints left over from the Cold War, a number of voices in Washington have also officially and unofficially endorsed Trump’s position on Assad, seeing Syria’s embattled secular regime and its backers in Moscow as natural allies of the West in the global struggle against radical Islam. After realizing how many unknown and fluid variables shape the Syrian opposition forces, many "realist" minds in Washington argue that toppling Assad should not be part of the US agenda.

According to this thinking, the Syrian regime — despite its war crimes — is the only actor in the country that can preserve the Syrian nation-state, secure a future for Syria’s ancient religious minorities, maintain Damascus’ de facto peace with Israel — which the country’s Baathist leaders have unofficially embraced since the mid-1970s — and provide millions of the country’s citizens with social services. Those who make this argument contend that the Damascus regime is Syria’s only realistic bulwark against IS and al-Qaeda franchises. Such voices maintain that “the devil you know is better than the devil you don’t.”

To many GCC officials, however, IS’ meteoric rise in Iraq and Syria was an outcome of the Baghdad and Damascus regimes’ oppression of certain Sunni communities and Iran’s expanded and consolidated influence across the Levant following the Iraqi Baathist regime’s 2003 downfall. Put simply, the Saudis and Qataris maintain that the sectarian nature of the Tehran-backed Iraqi and Syrian regimes are the root cause of these countries’ ongoing crises and thus IS is merely a symptom. These statesmen argue that Obama’s focus on combating the so-called caliphate and not the Syrian regime was rooted in a naive understanding of the war in Syria and the Islamic Republic’s "aggressive" and "predatory" actions in the region. There was much hope in Riyadh and Doha that a Clinton administration would move Washington closer to these GCC members on the question of Assad’s future.

Despite the extent to which Trump as a presidential candidate blasted Obama for pursuing policies that strengthened the Islamic Republic’s hand in the Middle East, from the Saudi and Qatari perspective one of the major risks of the billionaire’s strategy for defeating IS is that he will continue what Riyadh and Doha officials see as the outgoing president’s misguided approach of not taking military action against the Assad regime.

Of course, we must be careful in any analysis that attempts to forecast how Trump will approach challenges on the international stage, and the Syrian crisis may be his administration’s most difficult one in 2017. The president-elect has often contradicted himself, and his current stances on Russia, Syria, Iran and IS could easily change — particularly given the Middle East’s fluid geopolitical landscape and countless unknown variables shaping the US-Iran relationship in the post-Obama era. Although arguing that Trump will make America an official ally of Syria might be a stretch, it does appear that Assad has far less reason to worry about the US military punishing his regime once Trump enters the Oval Office. By taking pressure off Assad, however, Obama’s successor will certainly add new tensions to Washington’s relationship with Saudi Arabia and Qatar.