Should Iran worry about Putin throwing it under the bus?

Iranian officials have always had a pessimistic outlook toward Russia, which could serve them well given the apparent possibility of closer US-Russian relations under Donald Trump. 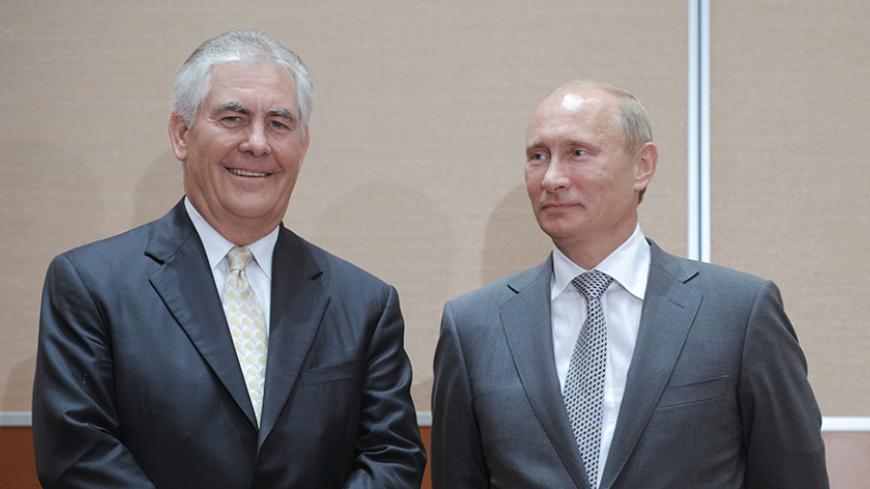 TEHRAN, Iran — US President-elect Donald Trump’s foreign policy approach remains a big question mark. With his nomination of a secretary of state, many were hoping that wild speculation would subside, but it is still difficult to form a clear picture of what US diplomacy will look like in the Trump era. Many in the Middle East are especially curious about what lies ahead.

Rex Tillerson, the CEO of ExxonMobil and Trump’s nominee for secretary of state, has been described in the US media as a friend of Russian President Vladimir Putin. Tillerson was also the longtime director of a US-Russian oil firm based in the Bahamas, prompting speculation that his appointment will be of benefit to Moscow. Some have even gone so far as to speculate that his presence at the State Department will mean a stronger Putin.

Tillerson’s nomination could be good news for Iran. This especially rings true when one considers the other mulled, but rejected, secretary of state nominees: former New York Mayor Rudy Giuliani, who lobbied to remove the Mujahadeen-e Khalq from the US terror list and accepted money from the group, and former US ambassador to the United Nations John Bolton, who in a March 2015 New York Times op-ed called for bombing Iran as the best way to stop its nuclear program.

Tillerson has said fairly little about Iran. In a March interview with CNBC, he cautiously pointed out that the United States' European competitors were profiting from Iran’s abundant natural resources while US firms were barred from doing so due to sanctions. Of course, he also pointed to the potential challenges and difficulties of an American presence in the Iranian energy sector. Yet Tillerson cannot be written off as simply bad for Iran given Tehran’s close ties with Moscow and Tillerson's to Putin. At the same time, it would be foolish to consider the potential absence of a negative as necessarily constituting a positive when it comes to Tillerson's approach to Iran.

Despite increasing Russian-Iranian collaboration in the region, Iranians do not have a very positive image of Russia. As Ali Bigdeli, a political science professor in Tehran, told Entekhab on Dec. 17, “The Russians have always shown that they are not to be trusted too much, and they are willing to sacrifice those close to them in order to achieve their goals.” This is a long-standing perception among Iran’s political elite that can perhaps be traced as far back as the Russo-Persian wars under the Qajar Dynasty (1785-1925), which saw Iran ceding a significant amount of territory under forced peace treaties.

An Iranian official who worked at Iran’s United Nations mission in New York in 2006, when the Security Council adopted Resolution 1696 — its first nuclear-related resolution against Iran — told Al-Monitor on condition of anonymity, “At that time, Russia had promised the Iranian government that it would veto any sanctions resolution against Iran at the UN, even though we in New York had warned Tehran that Moscow would not do this. But [President] Mahmoud Ahmadinejad was counting on Russia’s promise.”

Russia's long-stalled delivery of an S-300 air defense system to Iran, which Moscow committed to delivering in an $800 million deal in 2007, is another example of this dynamic. The system was finally delivered in April 2016, after a nine-year delay and after Iran filed a complaint against Russia with the International Court of Arbitration. The construction of the Bushehr nuclear power plant, which Russia agreed to build in the early 1990s but dragged out for almost two decades, is another instance that fueled pessimism about Moscow in Iran.

The crisis in Syria, however, has brought the two nations closer. Putin’s visit to Tehran on Dec. 23, 2015, and his meeting with Iran’s supreme leader, Ayatollah Ali Khamenei, are viewed as a watershed in the bilateral relationship. It should further be noted that Russo-Iranian cooperation reached a climax during the war in Syria, with Iran allowing Russia the use of one of its air bases in August, a move that sparked much criticism in Tehran.

Meanwhile, Russia hopes to play a prominent role in Iran’s economy following the implementation on Jan. 16, 2016, of the Joint Comprehensive Plan of Action (JCPOA). In fact, in November, Levan Jagarian, Russia’s ambassador to Tehran, complained about Iran pursuing aircraft deals with Airbus and Boeing instead of approaching Russian companies.

Should Iran be concerned about Russia’s seemingly deceptive policies if Tillerson is confirmed? Should Tehran worry about being dismissed by Moscow if that is the cost Russia is willing to pay to gain more leverage in Eastern Europe courtesy of Washington?

Prominent Iranian economist and political analyst Saeed Laylaz, referring to Russian double-dealing, told Al-Monitor, “It is natural for the Russians to do this, and we should not expect otherwise. But the other issue, which in my view is important, is the declining strategic value of the Middle East for the United States and the world. Oil is no longer a strategic commodity, and Trump’s approach, although unpredictable, has shown that the economy is a priority for him, and until today he has made the least remarks about Iran or the JCPOA."

He continued, "Therefore, I think all these factors together will cause regional players to come together. For me, the [Nov. 30 output ceiling] agreement in OPEC and the agreement over [evacuating eastern] Aleppo are two key indicators of this. Regional players will realize that they need not look outside [the region] for their security and that they can achieve regional balance through cooperation.”

Does Iran have a solution for Russia's potentially dumping it? A senior Iranian diplomat told Al-Monitor on condition of anonymity, “This discussion is wrong from the outset, because we are an independent player, and after the Syria crisis began, it was the Russians who pursued us and not the other way around. When the Arab Spring started, Russia believed that the future of Syria would be like Egypt's and Libya's, while we believed that the protests in Syria had an external source, and because of this, we helped [Syrian President] Bashar al-Assad. Ultimately, Russia realized that it should have a more serious presence in this conflict.”

The diplomat added, “We have so far not had a strategic alliance with Russia and therefore no reason to be concerned about Moscow’s future actions or its possible collusion with the United States. Iran and Russia have many common interests with regard to Syria and nothing else should be thought of these relations. This is not to mention that international relations are defined by pursuit of national interests and not sportsmanship, camaraderie and wisdom.”