Intel: How Russia's responding to US pullout from Syria 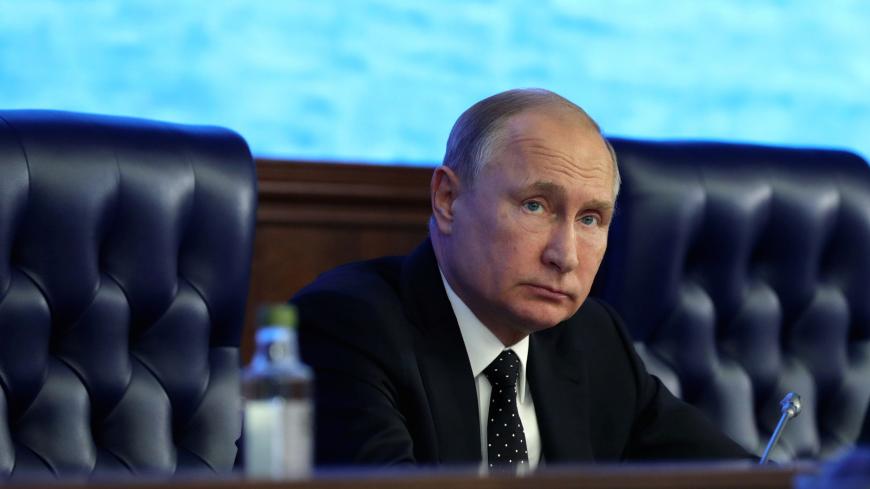 Russian President Vladimir Putin attends a meeting of the Defense Ministry Board in Moscow, Russia, Dec. 18, 2018. - Sputnik/Mikhail Klimentyev/Kremlin via REUTERS

President Donald Trump’s decision to pull US troops out of Syria came as much as a surprise to Russia as it did to US allies in the region. Moscow is openly delighted to see the back of a key foe of its ally Bashar al-Assad, but remains flummoxed by the unpredictable nature of US policy under Trump.

Why it matters: Moscow has long advocated for America’s exit from Syria. Washington’s criticism of the Russia-led Astana talks on Syria with Turkey and Iran have been a constant source of irritation. And the presence of 2,200 or so US troops in the region only compounded the aggravation once it became clear the United States and Russia weren’t on the same page on how to confront terrorism. Instead of allies in the fight against the Islamic State, Moscow sees them as a spoiler for Russia, a challenge for Turkey and a threat to Iran. But the abruptness of Trump’s decision and the collective freakout in Washington has led to a stream of disparate reactions in Russia, from ill-concealed gloating and suspicions that it's all a smoke screen for some secret US moves to anxiety over the possible implications in the near term.

Prospects for peace: Hours after the announcement, Russian Foreign Ministry spokeswoman Maria Zakharova expressed hope that the US pullout could create brighter prospects for settling the Syrian crisis.

“Maybe [the Syria-Jordan border] can now return to peaceful life, as did Aleppo. There was no such hope as long as American troops were there,” she told Russia’s Channel One.

Zakharova went on to argue that a US withdrawal could help kick-start talks on a new Syrian constitution that foundered this week after the Astana trio failed to agree on a final list of members with UN special envoy Staffan de Mistura.

“The initiative to establish the Syrian Constitutional Committee has better odds after the US decision to withdraw from Syria,” she added.

Putin speaks: The Kremlin largely stayed silent on the matter until President Vladimir Putin took to the stage today for his annual marathon press conference. Putin’s own reaction was more nuanced and sliced into three segments.

First, he agreed with Trump that the Islamic State was on the ropes, while adding that there was still “danger of these groups pouring into neighboring regions, Afghanistan in particular, and other countries to where they originate from.”

Second, the Russian president echoed the skepticism of many of his lieutenants.

“As for the pullout, I don’t know what it means,” he said, commenting, The United States has “been in Afghanistan for 17 years and almost every year they say they are pulling out.”

Finally, Putin tore into Western countries — the United States, France and Germany in particular — for allegedly pressuring the UN to block progress by the Astana trio.

“Do we need American troops [in this situation]? I don’t think so,” Putin said. “Let’s not forget their presence is illegal as they neither have a UN mandate nor a Syrian government invitation, like we do.”

Putin eventually finished by praising cooperation between Moscow and Washington.

“Despite our disagreements … contacts between our military, diplomats and intelligence services have elaborated a fairly constructive dialogue on issues of fighting terrorism in Syria,” Putin said. “In general, we are satisfied with how our joint work has been moving.”

What’s next: Despite the public reactions, the current mood in Moscow over the Trump decision can be described with one word: uncertainty. Speculation over what comes next is rife but virtually all relevant experts and policy-makers find it hard to say with certainty that Trump’s decision will benefit Moscow, at least in the short run.

Know more: Stay abreast of the latest updates on Moscow’s moves in the region in light of the American drawdown with our full Russia/Mideast coverage here.