Turkey says Syria offensive does not depend on US troop withdrawal

Foreign Minister Mevlut Cavusoglu has warned against attempts to delay Turkish plans to fight a Kurdish militia in Syria when the United States pulls its forces out. 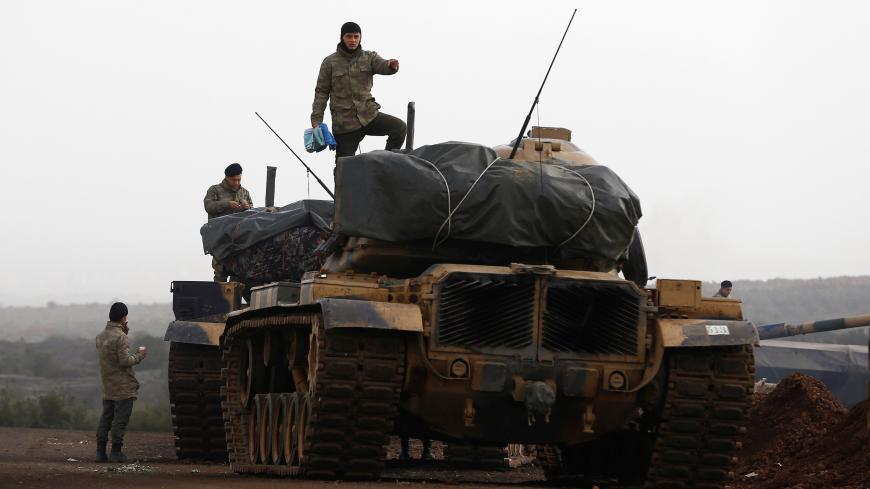 Turkish soldiers stand on top of tanks in a village on the Turkish-Syrian border in Gaziantep province, Turkey, Jan. 22, 2018. - REUTERS/Osman Orsal

ISTANBUL — Turkey could still enter Syria to quash Kurdish militants even if the United States delays its withdrawal from the area, Foreign Minister Mevlut Cavusoglu said on Thursday, accusing US officials of coming up with “excuses” to stay in the war-torn country’s northeast and stymie President Donald Trump’s plans to pull US troops out.

A rare show of unity between the United States and Turkey on Syria curdled this week over the fate of the People’s Protection Unions (YPG), the Kurdish militia that has fought the Islamic State alongside the United States but that Turkey views as a terrorist organization for its ties to a militant group that has waged a three-decade insurgency inside Turkey.

US Secretary of State Mike Pompeo and national security adviser John Bolton have pledged that the US departure from Syria would not leave the Kurds vulnerable to attack by Turkey after Trump faced a backlash at home over his surprise decision last month to leave Syria.

President Recep Tayyip Erdogan delayed an offensive against the YPG after a Dec. 14 phone call with Trump when the US president told him he would withdraw some 2,200 US special forces and invited Turkey to take over the fight against the Islamic State.

Bolton traveled to Ankara this week to hammer out a plan to coordinate the pullout, but Erdogan, angry over Bolton’s comments that the withdrawal had conditions that safeguard the Kurds, refused to meet him and instead took potshots at Trump’s adviser during a speech to his party.

“Our operation against the YPG is not dependent on the US withdrawal,” Mevlut Cavusoglu, Erdogan’s foreign minister, told NTV. “Whether or not it withdraws, we will do whatever is necessary against a terrorist organization that threatens our national security."

Turkey wants to give US forces time to leave and coordinate the pullout, which is now expected to take 60 to 120 days, but if it sees Washington is “procrastinating,” it will go ahead with its plans for an operation, he said.

On a trip to Cairo, Pompeo insisted Trump’s decision is final and Bolton’s remarks did not contradict it. A day before, the top diplomat said Erdogan had “made commitments” to protect the United States’ Kurdish allies. For his part, Erdogan said this week Turkey would do “what’s necessary” to fight terrorism and warned a Turkish offensive could come “at any moment.”

“Trump has now told our president twice that they will withdraw,” Cavusoglu said. “You make the decision to withdraw, then you try to find excuses not to by blaming Turkey.” Ankara still expects Trump to stick to his word, he said, but acknowledged, “There are those in the field who are working to prevent the withdrawal,” counting Bolton among those opposed to it. “US security units are trying to dissuade their president,” he added.

His words echo a refrain that has emerged in the Turkish media that US administration officials are blocking their own president from following through on policy decisions. Bolton went “rogue” and “a soft coup against Trump is underway in the United States,” an editorial in Turkey’s pro-government Daily Sabah claimed this week, citing attempts by US officials to force Trump to retreat on the withdrawal.

Erdogan has said he and Trump are on the same page and complains others in the US administration have undermined US-Turkish ties. He remains reluctant to alienate Trump, said Nihat Ali Ozcan, a security policy analyst at the Economic Policy Research Foundation of Turkey.

“Turkey does not want to put Trump in a difficult position. Trump took a big domestic risk in ceding to Erdogan’s demands, and Erdogan is aware of this,” he told Al-Monitor.

The Turkish lira, which went into free-fall in August over tensions with the United States, is down 2% this week amid worries that the rapprochement with Washington will be short lived.

In the interview, Cavusoglu also rejected a US condition on the sale of its Patriot missiles that Turkey abandon plans to buy the Russian-made S-400 air-defense system. The United States is worried sensitive NATO technology could pass to Moscow if Turkey uses both systems. Such a condition would make a deal with the United States “impossible,” he told NTV.

Meanwhile, Russia, which has backed Syrian President Bashar al-Assad in the seven-year war, may seek to exploit the confusion created by the bickering between Turkey and the United States.

A state-run Russian television station reported that Russian military police were patrolling the outskirts of the town of Manbij, where US soldiers remain, in a buffer zone separating Syrian forces and “militants” outside of the town. It was not clear if it was referring to Turkish-backed rebels fighting Assad or the Syrian Democratic Forces, the US-aligned militia dominated by the YPG.