Analysts say Hezbollah has made a sharp pivot toward confrontation with Gulf states, in part as a result of its alliance with Iran. 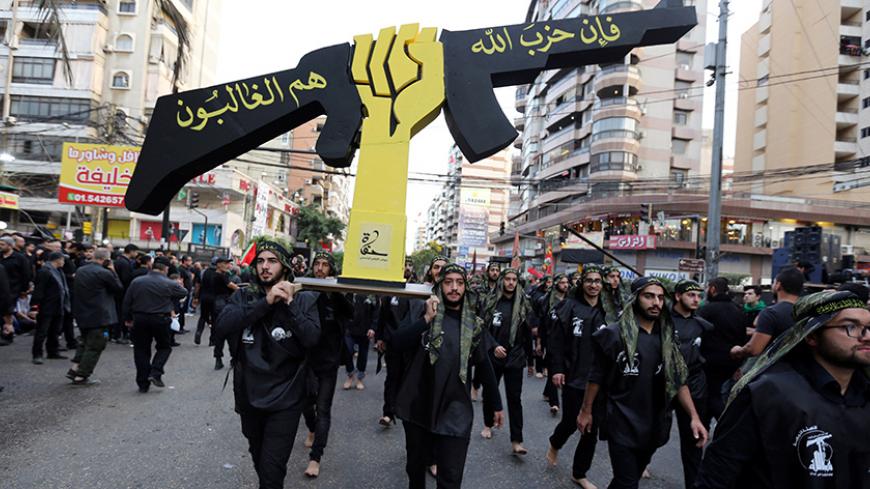 The undeclared war between some Arab Gulf countries and Lebanon's Hezbollah is on again, as the United Arab Emirates (UAE) on Oct. 31 sentenced seven people to prison terms up to 15 years for links to the Shiite political party's armed wing, and Saudi Arabia reiterated Oct. 25 its determination to fight the group.

Hezbollah Secretary-General Sayed Hassan Nasrallah lashed out at Saudi Arabia in an Oct. 12 sermon, his most recent. He labeled the country's battles in Yemen an expression of “hatred,” adding, “The Saud family will be defeated in Yemen.”

Gulf nations consider threats from Hezbollah a priority. The enmity between Hezbollah and the Gulf countries has been escalating over the past decade. The first trigger was the assassination of Lebanon's Saudi-friendly prime minister, Rafik Hariri, in February 2005. Hezbollah operatives are currently being prosecuted in that case by the international Special Tribunal for Lebanon. Hariri, a Sunni, was Saudi Arabia’s man in the Land of the Cedars.

The war in Syria — which began five years ago between mostly Sunni rebels and the regime of President Bashar al-Assad, who is backed by Hezbollah — only added fuel to the fire already burning between the organization and Gulf countries. In March, the Gulf Cooperation Council (GCC) declared Hezbollah a terror organization.

Hezbollah has also been upping its activity in Gulf countries.

“There is a huge awareness now that Hezbollah is a threat in the Gulf,” Saudi Gulf expert Abdulkhaleq Abdulla told Al-Monitor. Abdulla is chairman of the Arab Council for the Social Sciences and a retired political science professor.

In recent years, several Hezbollah cells have been dismantled in the Arab region. On Oct. 31, the UAE sentenced seven people for their links with Hezbollah, including three Lebanese, two Emiratis, one Iraqi and one Egyptian. In September 2015, Kuwait charged 26 people suspected of links to Iran's government and Hezbollah with plotting attacks against the Gulf state, according to Al Jazeera.

In April, the UAE prosecuted several Hezbollah members accused of gathering intelligence on the Emirates’ political, military and economic activity. In June, Riyadh’s Special Criminal Court revealed links between Hezbollah and a cell assigned to launch attacks against security officials in Awamiyah, a Saudi Shiite village

“There is a fear in Gulf countries of Hezbollah organizing terror attacks on behalf of Iran,” Mustapha Alani of the Gulf Research Center told Al-Monitor. Gulf countries have not forgotten the devastation of the 1996 Khobar Towers bombing, which was the work of Ahmed al-Mughassil, the military chief of the Saudi branch of Hezbollah. Mughassil was apprehended in Beirut in 2015 and deported to Saudi Arabia. He had allegedly lived in Lebanon for years under the protection of Hezbollah. Gulf countries also haven't forgotten the involvement of Hezbollah commander Mustafa Badreddine in the Kuwait bombings of 1983. Badreddine was killed in an explosion in Damascus in May.

Abdulla also said Gulf countries worry about efforts by Hezbollah to encourage Gulf Shiites to favor Iran. Gulf countries are home to large Shiite minorities. According to Alani, Kuwait's population is 30% Shiite. About 10% to 15% percent of Saudi Arabia’s population of 30 million is Shiite. The percentage goes down to 5% in countries such as the UAE, according to Alani. Bahrain is the only Gulf exception; it is home to a Shiite majority but is led by a Sunni royal family.

Shiite minorities took to the streets in the wake of the Arab Spring, which began in late 2010. In 2011, a wave of protests shook Saudi Arabia’s eastern provinces, with dozens dying at the hands of government forces. The eastern oil-rich provinces are plagued by stark poverty, and the population there has demanded greater political and economic rights, the release of political prisoners, a new constitution and greater power for elected bodies and equal treatment.

Alani said he believes the threat of infiltration by terrorist groups can be contained. He said discrimination against Shiites in countries such as Saudi Arabia is not intentional. “Poverty and poor infrastructure are not only found in the Shiite eastern provinces, but also in the southern Sunni Najran areas,” he said.

But ultimately, it is Hezbollah’s involvement in Yemen — a country considered a strategic priority for Saudi Arabia — that exacerbates tensions between the Shiite group and Gulf countries.

According to Foreign Affairs, quoting Saudi Arabia-owned Al-Arabiya news network, a video was posted in February of Hezbollah commander Abu Saleh meeting the previous summer with Houthi forces in Yemen. According to the Foreign Affairs story, "The Houthi Hezbollah," the video showed a man in military fatigues addressing a group in Lebanese-accented Arabic about training for assassination operations inside Saudi Arabia, including a specific attack against an undisclosed Saudi commander of border forces.

Sources close to Hezbollah told Al-Monitor that a small number of Hezbollah operatives have been training Houthi rebels for some time. Hezbollah and Iran are backing Houthi rebels in Yemen as well as the forces of former Yemeni President Ali Abdullah Saleh. Meanwhile, Saudi Arabia has launched a coalition supporting the transition government of Prime Minister Abed Rabbo Mansour Hadi. The US Treasury has also sanctioned Hezbollah figures for the group's operations in Yemen.

“We have gathered evidence as well that Hezbollah has been training Kuwaitis, Bahrainis and Yemenis in Lebanon and Syria,” Abdulla said.

Both for internal reasons and as a result of its close alliance with Iran, Hezbollah has pivoted sharply toward confrontation with the Gulf states, according to Mathew Levitt, director of the counterterrorism program at the Washington Institute for Near East Policy.

“For Hezbollah, this pivot is not exclusive of its open-ended battle with Israel, but rather an extension of it and of its fight against Sunni rebels in Syria,” Levitt said in the August issue of the CTC Sentinel, a publication of the Combating Terrorism Center at the United States Military Academy.

As Hezbollah comes to play a larger role in Syria, it is naturally expanding its area of operation to other countries. The ongoing sectarian war in the Levant and the Saudi-Iranian rivalry will certainly bolster the organization’s regional involvement.