President Barack Obama must now muster the courage to fulfill his 2009 Cairo speech pledge to push for the establishment of a Palestinian state. 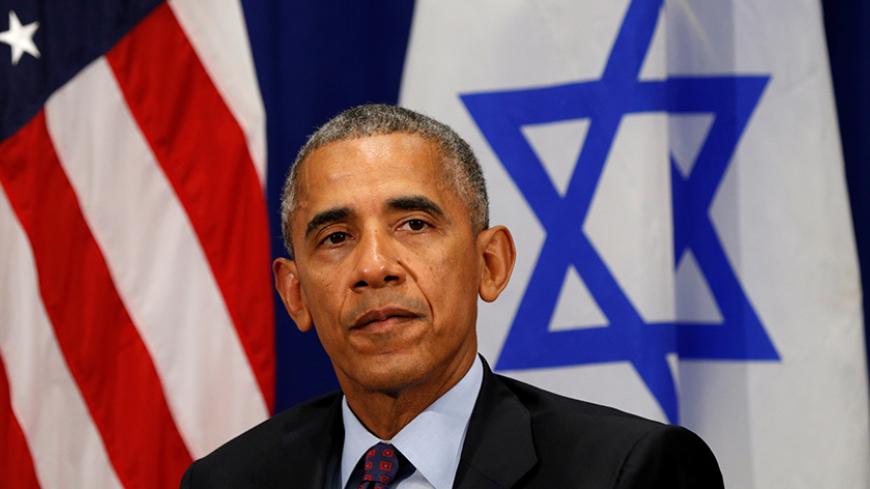 The central question concerning politicians and pundits in Israel and the occupied territories these days is about the day after the US presidential elections. What will happen in the transition period starting Nov. 9 and ending with the changing of the guard at the White House on Jan. 20, 2017? Will President Barack Obama veto the UN Security Council resolution recognizing a Palestinian state, or will he make do with yet another speech rebuking Israel? Or perhaps he will prefer a UN vote condemning the Jewish settlements? Either way, any decision Obama makes will have far-reaching implications for millions of people in the Middle East.

If Obama opts to withhold his veto power and the Security Council turns Palestine into a new UN member of equal standing, Israel will automatically and officially become an occupier by force of another UN member state. Of course, Prime Minister Benjamin Netanyahu will then summon Israel’s UN envoy, Danny Danon, for consultations in Jerusalem in protest, as he did in reaction to the UNESCO decision over the Temple Mount, which denied Jewish ties to the Temple Mount and Western Wall. But this “punishment” is highly unlikely to stop the snowball of international sanctions against Israel by all agencies of the UN and capitals of the world.

On the other hand, if Obama chooses only to issue a lame-duck reprimand to Israel over settlement construction, his final days in the Oval Office could also be the final days of Palestinian President Mahmoud Abbas and his Fatah movement at their headquarters in the Palestinian West Bank city of Ramallah. Defense Minister Avigdor Liberman seems to have already dismissed Abbas, promising to only do business with his successor.

In an Oct. 13 interview with the daily Israel Hayom, Avi Dichter, the chairman of the Knesset’s Foreign Affairs and Defense Committee, suggested that “the next president of the Palestinian Authority may not even be from the ranks of Fatah. … I would not be surprised if Khaled Meshaal [the head of Hamas’ political bureau] runs and is crowned president.” Dichter, the former director of Israel’s Shin Bet internal security agency, thinks Hamas will ignore all the agreements that the Palestinian Authority (PA) signed with Israel over the years, as it did when it took over Gaza in 2007. “Such a reality takes us back to a situation that is far worse than the one in the territories before the [1993] Oslo Accord,” Dichter said. The only solution in that situation, in his view, would be for Israel to renew its control over all the West Bank territories.

Dichter knows full well how many Israelis, among them travelers who lost their way, owe their lives to the PA’s security forces that found them and brought them to safety. What was true for as long as Abbas led the PA will no longer be so after this 81-year-old man steps down or is forced to hand over the reins. A study titled “The Likelihood, Consequences and Policy Implications of PA Collapse or Dissolution: The ‘Day After’ Final Report,” conducted in 2013 (published in 2014) with the participation of 115 researchers, determined that dissolution of the PA would result in an about-face in Fatah’s approach toward a solution of the Palestinian conflict with Israel to the point where it might revert to its long-abandoned armed struggle policy. Hamas would then be accorded broad legitimization on the Palestinian street, far broader than the legitimization it lost through its failed conduct of daily life in the Gaza Strip. The report, compiled by the Palestinian Center for Policy and Survey Research, foresees that a collapse of the PA would lead to a collapse of the Palestinian legal system and essential services. Poverty and crime rates will skyrocket, and dozens of militias will turn the West Bank into fiefdoms ruled by armed gangs.

Like Dichter, senior defense and diplomatic officials are aware that a dismantling of the PA would force Israel to deploy tens of thousands of soldiers and Shin Bet agents to Palestinian towns, markets and refugee camps. Defense briefings warn that the knife-wielding terrorists of the latest wave of Palestinian violence will make way for suicide bombers. The Finance Ministry realizes that the closure of the PA will cut off funding by donor states and restore the burden of funding services and infrastructure in the territories to the Israeli taxpayer. Who will bear responsibility for such a disaster?

Top political and defense echelons are already looking to assign blame. At the top of their list is, of course, Abbas himself. He’s a dictator, so they claim — corrupt, dissolute, inciting, deceitful; a hapless, bumbling idiot. And what’s worse, as far as they’re concerned, he refused to recognize Israel as the nation state of the Jewish people. And if that’s not enough, Abbas dared demand that Israel freeze construction in the settlements at least during negotiations. What gall.

Abbas, so they claim, is far from perfect (we Israelis are the only ones who have such leaders). He prefers to surround himself with sycophants and kicks out anyone he deems strong (such things never happen in Israel). The top Fatah echelons can compete with the heads of Liberman’s Yisrael Beitenu Party for the title of the Middle East corruption championships. But Abbas’ critical failure is the violation of the pledge he and his leadership partners made to their people 23 years ago — the promise to rid them of the Israeli occupation and establish a state for them. In the ensuing years, the PA did not even succeed in preventing the deepening of the occupation. Under Fatah’s rule, the number of Jewish settlers rose from 116,000 (after the 1993 Oslo Accord) to almost 400,000 (2015). At the same time, the number of Palestinian house demolitions by Israel in the West Bank and East Jerusalem, and the extent of the abuse of Palestinians, grew. This is the thanks Israel gave the Palestinians for their sponsorship of the apartheid state it is running in the territories.

Israel feels free to conduct itself in the West Bank as if it owned the place, simply because it can. It can because the United States enables it, because Obama turned his back on the promise he made during his landmark 2009 Cairo speech to promote the establishment of a Palestinian state. Not only have things not improved since then, they have deteriorated. The hope that a democratic president, committed to human rights, would be the one to bring peace is all but gone. If Obama does not dare to expel Israel from the occupied territories, who will? He has only a few months left to rectify the wrong and stop our plunge into an abyss.