What are Netanyahu and Putin plotting?

A rumored Israeli-Palestinian summit in Moscow may be a maneuver by Israeli President Benjamin Netanyahu to try to thwart a new US initiative. 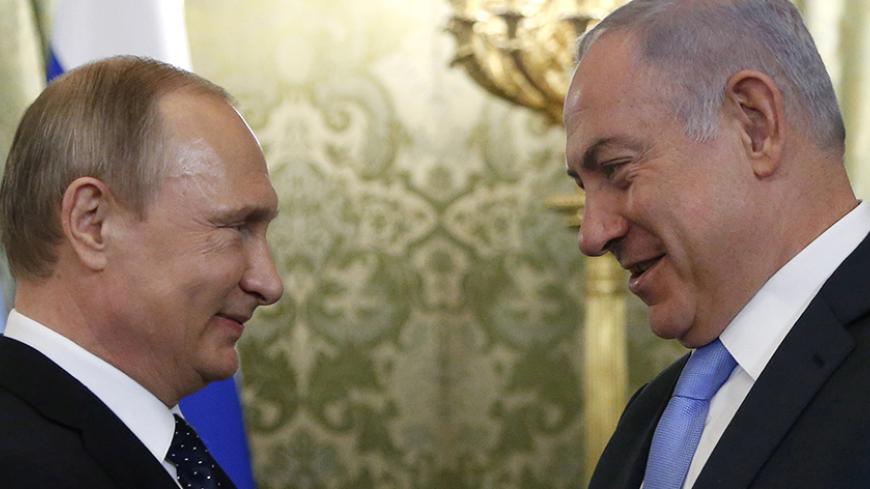 According to quite a few reports in recent weeks, Russian President Vladimir Putin plans to host a summit in Moscow for Prime Minister Benjamin Netanyahu and Palestinian President Mahmoud Abbas. The first report appeared in Maariv on July 11 and was confirmed by Egyptian President Abdel Fattah al-Sisi in a press briefing this month as well as by Israeli, Palestinian and Russian officials.

According to sources, the summit is being planned to take place around October or a little later. Is Netanyahu continuing his “pivot to the East” and trying to shore up Russia’s position as an honest broker in the faltering negotiations between Israel and the Palestinians? Is Putin trying to deepen Russia’s renewed penetration in the region? Having inserted Russia in the Syrian conflict, is Putin now trying to erode the United States’ historic role as honest broker between Israel and the Palestinians? It seems that both of these assessments are exaggerated. In general, it is more likely a matter of politics and sophisticated tactical maneuvering on Netanyahu’s part. His goals are completely different from those above.

In an appearance before the UN Security Council on Aug. 29, Nikolay Mladenov, a Bulgarian and the UN envoy for peace in the Middle East, sharply criticized Israel’s policies in the territories. His criticism included harsh statements regarding the onset of recently announced construction work on units in West Bank settlements and East Jerusalem and the new “carrot and stick” policies of Defense Minister Avigdor Liberman toward West Bank Palestinians. Mladenov emphasized that Israel’s settlement policy thwarts chances for peace, and he used extremely sharp language in criticizing the Israeli government. Jerusalem released an angry response instead of turning the other cheek.

Sources involved in negotiations told Al-Monitor that the entire sequence of events has been meticulously planned by Putin and Netanyahu, but with different objectives. The two men speak on the phone at least once a week and have met three times over the last two months. This is not evidence of any real affinity or closeness, but clearly a game involving the intersection of mutual interests. Putin encourages activities that strengthen Russian influence in the Middle East and annoy the White House, including diplomatic feints. Netanyahu, on the other hand, has his sights set on one main objective: averting a lame-duck American diplomatic initiative.

Al-Monitor’s sources say that neither man toys with the hope that the summit with Abbas will bring about a breakthrough or advance chances for peace. According to several people knowledgeable about what's going on, Netanyahu has another goal in mind: “All he wants is to safely survive the two months between November and January, when President Obama [as a lame-duck president] will be free of all commitments and able to conduct a dramatic diplomatic move or simply refuse to veto a diplomatic initiative [at the UN Security Council]. This could inflict great strategic damage on Israel,” a senior Israeli diplomatic source told Al-Monitor on the condition of anonymity.

The story line is simple: A dramatic diplomatic summit in Moscow in October or November is supposed to “pacify” Obama by creating a fake show that things are actually moving on the cold front between Netanyahu and Abbas, perhaps even a breakthrough. That is why Netanyahu continues to invest in trying to persuade Zionist Camp leader Isaac Herzog and parts of Herzog's party to join the current government. If at the same time as all this Herzog is appointed foreign minister, Netanyahu's “performance” will have been flawless.

Netanyahu recently transmitted a message to the White House about his concern that Obama might try to initiate a last-minute diplomatic initiative that would inflict, according to the prime minister, great damage on both sides. Everything that Netanyahu has been planning in recent weeks is connected to a false diplomatic feint to help convince Obama that there is no real need for such an initiative.

On Aug. 30, Likud Minister Tzachi Hanegbi, a close Netanyahu associate, spoke at a convention of Israeli lawyers. In the first row of the hall sat Herzog, whose public image and stature were significantly harmed by intense, unsuccessful unity negotiations with Netanyahu earlier this year. Surprisingly, almost all of Hanegbi’s speech was dedicated to a renewed appeal to Herzog to join the government, based on the argument that there are almost no differences of opinion between the two parties.

Several hours later that day, at the funeral service for former Labor Defense Minister Binyamin Ben-Eliezer, Netanyahu said that no significant differences of opinion remain between Likud and Labor today. The message is clear: Despite bringing Liberman into the government, Netanyahu is still interested in Herzog. The problem is that after what Netanyahu has done to Herzog in recent months — humiliating him by cutting short their unity talks, despite Sisi's support for such a coalition, while also granting Liberman the defense portfolio — nothing much remains of Herzog. His standing in his party and the general public is at an all-time low, and the public disclosure of another meeting between Herzog and Netanyahu about two weeks ago didn't improve the situation.

Netanyahu is once again playing a classic game, the one he has played throughout the years. He dances at all the weddings and with everyone at the same time. In a series of extensive talks that he recently initiated with top media representatives, Netanyahu made it clear that no real negotiations with the Palestinians are likely at the moment, no chance for the establishment of a Palestinian state in the apparent future. The famous 2009 Bar Ilan speech he delivered now collects dust in a forgotten drawer somewhere.

Yet at the same time, Netanyahu continues to dance around Herzog with diplomatic programs, continues to repeat to Sisi that he is still committed to whatever was agreed between them with the mediation of former Middle East peace envoy Tony Blair and continues to send conciliatory messages of peace to Washington in an effort to prove that he is not the obstacle to negotiations. This dance no longer fools anyone in Washington. Obama is fed up with Netanyahu, with the spoiled goods that Netanyahu sold him for six years before he came to his senses in 2014. Putin is a realist and not particularly interested in Israeli-Palestinian negotiations. His focus is only on Russia’s stature in the region.

The main question that remains unanswered is what will Obama do or not do during his last window of opportunity, between November and January? At this stage, even Obama doesn’t know the answer. It is a decision he has probably not yet made.

Note: An earlier version of this article mistakenly identified Nikolay Mladenov as Russian.