Attempts by a long line of American presidents, both Democrats and Republicans, to broker an accord between Israelis and Palestinians or promote initiatives to end the conflict have hinged more on timing than anything else. 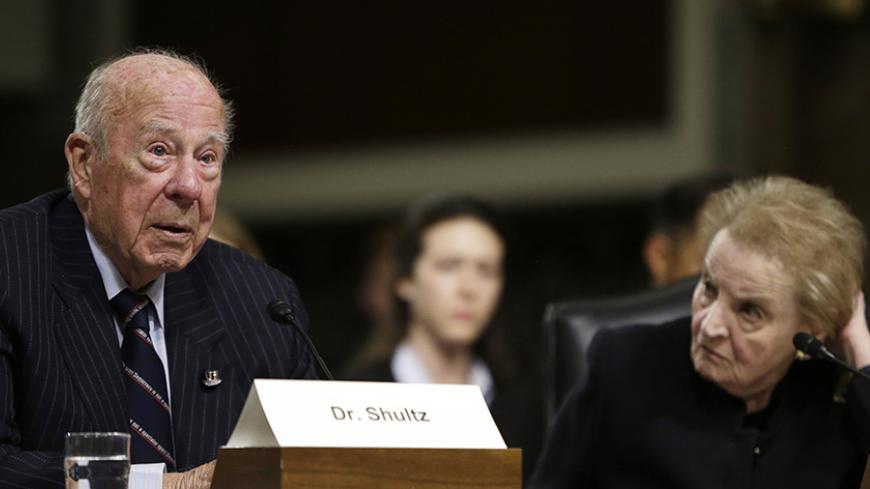 In the US Republican primaries, nothing exemplifies the nature of the Israeli connection to American political discourse better than Sen. Marco Rubio's tempest-in-a-teapot over leading Republican candidate Donald Trump saying that he intends to try to make peace between Israel and the Palestinians. And if that weren’t enough, in the Feb. 18 debate, Trump dared to say that it's not efficacious for a mediator in negotiations to declare unswerving support for one of the sides.

This sentence made Trump an unfair mediator in Rubio’s eyes, and he swore not to be neutral, saying, “I will be on Israel’s side every single day, because they are the only pro-American, free enterprise democracy in the entire Middle East.”

Several days earlier, Prime Minister Benjamin Netanyahu warmly welcomed former US Secretary of State George Shultz, who visited Jerusalem. In a speech in the Israel Democracy Institute, Netanyahu complimented the retired diplomat on his “vision and integrity” and ended with lofty words about Israel and the Jewish people never having a better friend. Yet according to the "Rubio index," Shultz’ friendship is questionable. Al-Monitor has discovered that the 95-year-old diplomat has recently consolidated a group of Israeli, Palestinian and American experts to discuss alternatives to the two-state solution, according to the Oslo Accord model. In the discussions, he has not concealed his disappointment in the policies of Israel’s right-wing government.

In terms of commitment to peace, Shultz is a visionary and also a real friend of Israel. Almost 30 years ago, he tried to promote a peace initiative crafted by Shimon Peres, then foreign minister in a unity government with the Likud, and Jordan's King Hussein bin Talal. The initiative, known as the London Agreement, was supposed to commence with an international convention, after which the sides would begin negotiations for resolving the Arab-Israeli conflict on the basis of UN Resolutions 242 and 338. Despite US President Ronald Reagan’s pleas, Prime Minister Yitzhak Shamir sabotaged the initiative. He wrote to Shultz on May 15 of that year that parts of the plan were “not consistent with our national interests.” As far as Shamir was concerned, Shultz was too neutral a mediator.

At the end of 1988, Shultz settled his account with Shamir. Shultz encouraged PLO head Yasser Arafat to pass a resolution in the Palestine National Council to adopt UN Resolutions 242 and 338 and abandon the armed struggle. Thus the path was paved for opening an official dialogue between the Reagan administration and the PLO leadership. This took place in the lame-duck transition period between presidential elections and the arrival of successor George H. Bush to the White House. Shultz never managed to reap the fruits of his efforts. The Bush administration used them (and the attainments of the First Gulf War) to drag Shamir and Deputy Foreign Minister Benjamin Netanyahu to the international Madrid Peace Conference in 1991. But alas, no progress emerged from that conference.

Uri Savir wrote this week that according to a high-placed source who visits the region frequently, the US administration wants to consolidate a diplomatic platform for the two-state solution with an eye toward the post-President Barack Obama era. Will the Obama administration take advantage of this transitional lame-duck period, free of electoral considerations, to pave the way for a diplomatic initiative for the coming administration, on this 25th anniversary of the Madrid Peace Conference?

Elie Podeh, a professor with the Department of Islamic and Middle East Studies at the Hebrew University of Jerusalem, recently published the book "Chances for Peace: Missed Opportunities in the Arab-Israeli Conflict." He told Al-Monitor just this week that his research shows that a peace initiative introduced at the beginning of an American president’s term of office has higher chances of success than one that emerges later on.

One of the examples cited by Podeh is that of former President Jimmy Carter, who opened a diplomatic dialogue with Israel and Egypt in his first year of office that led to the signing of a peace agreement within two years. By contrast, the Bill Clinton Parameters and talks between Syria and Israel, both of which took place at the end of his administration, ended in bitter disappointment. Therefore, Podeh advises the coming president to adopt a diplomatic initiative immediately after entering the White House. Podeh, a senior research fellow at the Harry S. Truman Institute for the Advancement of Peace, noted that all the peace agreements — those with Egypt and Jordan along with the Oslo Accord — would never have seen the light of day if not for the drive and resolve of the local players. “However, since the odds are low that Israel will come out with a peace initiative, the only way to try to jump-start the process is via an American initiative,” he added.

According to Podeh, there is an opportunity for peace in the juncture between historical turning points — such as wars, revolutions or the rise of new governments — and the existence of an attractive proposal on the table. “The election of a new president who will come out with a new initiative creates a new opportunity for the sides,” Podeh said. “If we connect that to elements of the Arab Peace Initiative and incentives offered by the European Union, it is possible to create such a proposal.”

In summary, it is important to remind ourselves that all the American presidents — from Richard Nixon to Obama, Democrats and Republicans, liberals and conservatives alike — have tried their hands at ending the Israeli-Arab conflict. Their efforts have no connection to the flattering, hypocritical words fed to right-wing ears of Israelis and Jews in television debates.