Middle East will quickly teach Trump rules of the game

As US president, Donald Trump will have little option but to engage in the Israeli-Palestinian conflict, and when he does, judiciously. 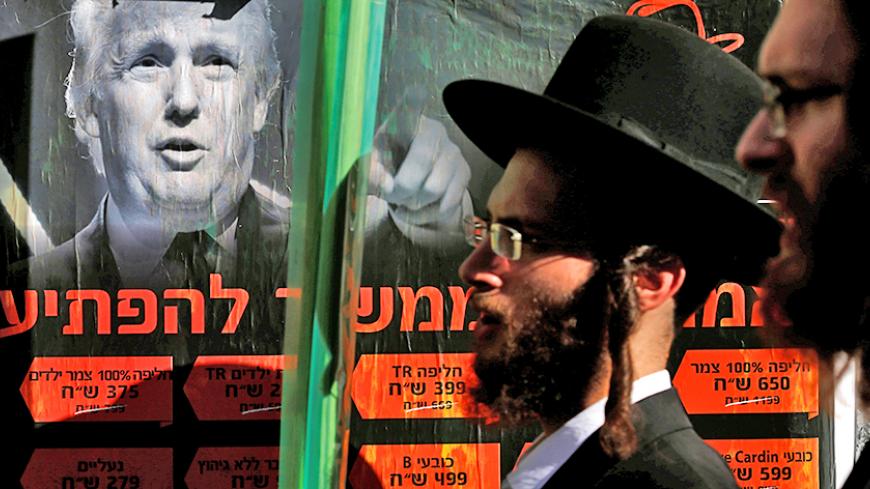 If the raw materials for predicting the Middle East policy of President-elect Donald Trump consist of his pronouncements on the issue during the election campaign, he will watch the Israeli-Palestinian bonfire from the sidelines, at best. At worst, the businessman, devoid of any diplomatic training or experience, will fuel the flames with gallons of gasoline. Trump’s victory in the Republican presidential primaries, and surprising victory in the general election, indicate that the man is far from being a pyromaniac. He will invariably also be quick to understand the rules of the game in the Middle East. As an ambassador who served in the Middle East for many years once told me, “We have learned that your region is like an automatic car with two gears — drive and reverse. There’s no neutral or park. If we don’t advance, we retreat.”

At the start of Ronald Reagan’s presidency, people also said that he would not go near the quagmire of the Arab-Israeli conflict. He was dragged in, however, by the 1982 Lebanon war and the evasive tactics adopted by the right-wing Israeli government to avoid autonomy talks with the Palestinians. Reagan ended up presenting Prime Minister Menachem Begin with a peace plan based on an Israeli withdrawal from the territories it had captured in 1967. After a furious Begin rejected the blueprint, Reagan lifted the US boycott of the Palestine Liberation Organization (PLO) and launched talks with its leader, Chairman Yasser Arafat.

Later, people said that the conservative Bush presidents would not go anywhere near the Middle East. President George H.W. Bush went to war against Iraq after its invasion of Kuwait in 1990, forced right-wing Prime Minister Yitzhak Shamir's participation in the 1991 Madrid peace conference, and made Shamir choose between expanded US economic aid and expanded West Bank settlements. President George W. Bush initiated the 2003 road map to Middle East peace, which required Israel to completely freeze settlement construction, and contributed to the decision by Prime Minister Ariel Sharon to withdraw from the Gaza Strip two years later, in 2005.

On the other hand, it is hard to point to any significant contributions by Democratic Presidents Bill Clinton and Barack Obama to peace between Israel and the Palestinians, Syria or Lebanon. It is too soon to assess the endurance of the nuclear agreement with Iran pursued by Obama, but a President Trump, unlike the candidate Trump, is highly unlikely to opt for the alternative — a war in the Middle East that could deteriorate into a nuclear conflagration. Trump’s affinity for Russian President Vladimir Putin, Iran’s partner in the war in Syria, may herald calm on that front.

Russia is also a key member of the Middle East Quartet, the group President George W. Bush established in 2002 to shepherd the Israeli-Palestinian peace process and that includes the European Union and United Nations along with the United States. Trump’s advisers will probably warn him about the dire consequences of dismantling the Quartet, namely, burying the peace process, dismantling the Ad Hoc Liaison Committee on the Palestinian economy and the cutting-off of US aid to the Palestinian Authority. Trump pledged to move the US Embassy from Tel Aviv to Jerusalem, but he would not be the first to promise this and later renege on the pledge.

At the end of the 1960s, when the Republican Gerald Ford served as House minority leader, he promised the Israeli ambassador to Washington, Yitzhak Rabin, that if he were ever elected president, the first thing he would do was relocate the US Embassy from Tel Aviv to Jerusalem. When the two met at the White House in the mid-1970s, Prime Minister Rabin reminded President Ford of his promise. “In the Oval Office you view things differently,” Ford responded.

In an interview I conducted with House Speaker Newt Gingrich in 1995, shortly after the Republicans took both houses of Congress by storm, he promised that the US ambassador would soon be moving from Tel Aviv to Jerusalem. In a Nov. 9 interview with Channel 10 anchor Tamar Ish-Shalom, David Friedman, Trump’s adviser on Jewish issues, made no secret of his hope to be named US ambassador to Israel. Nonetheless, he elegantly sidestepped the question of whether he would, should he be appointed, have the privilege of serving in Jerusalem.

Indeed, expectations are not high that Trump will be the US president who douses the flames of the Israeli-Palestinian conflict and brings about peace. His belligerent, Darwinist attitudes leave no room for such sentiments as compassion and sensitivity to injustice. Given this, as far as left-wing Israelis and human rights advocates are concerned, anything Trump actually does cannot be worse than expected, surprising them for the better.

The hope that Hillary Clinton would use the leverage at the disposal of the world’s strongest power was not well-founded. In her four years at the State Department, Clinton did not make progress on any Arab-Israeli channel. As reported in Al-Monitor Nov. 8, during her four-year stint on President Obama’s watch, thousands of building permits were issued to Jews in the occupied territories and demolition orders for Palestinian homes in the West Bank. Clinton’s commitment to Jewish donors and voters augured more of the same from the Oval Office.

Even if Clinton had won the election and succeeded in revitalizing the two-state solution, her hands would have been tied by the Republicans, who maintained their majority in both houses of Congress in the Nov. 8 elections. Netanyahu’s patron, gambling tycoon Sheldon Adelson, will undoubtedly keep pulling the strings to Capitol Hill, but with the same party controlling the White House and Congress, Netanyahu’s room for maneuver will shrink. Trump would not have allowed a foreign leader to hatch plots with Congress behind his back, as for example, Netanyahu did to Obama with his 2015 speech to the chamber in a bid to scuttle the nuclear agreement with Iran.

The question that has kept everyone busy in recent months remains: Will Obama take advantage of the transition that began after election day and ends on Jan. 20 to push through a UN Security Council resolution recognizing a Palestinian state? If he does so now, after the Republican candidate’s victory, no one will be able to accuse him of disloyalty to his like-minded Democratic Party partner. Obama does not owe Trump a single thing. Maybe the incoming president will even find it convenient for the outgoing president to do that work for him.

by Murielle KASPRZAK and Joseph SCHMID | AFP | May 26, 2022
END_OF_DOCUMENT_TOKEN_TO_BE_REPLACED