US President Donald Trump announced Thursday that the United States had accepted Morocco's claim to disputed Western Sahara and that Morocco and Israel were establishing full relations. 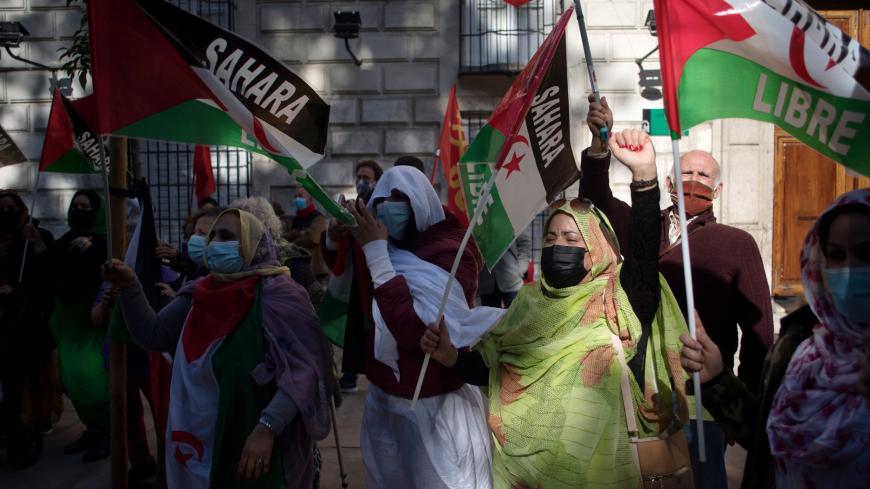 A group of women wave Western Saharan flags as they take part in a demonstration in support of the Sahrawi people's rights on Nov. 28, 2020, in Malaga, Spain. - JORGE GUERRERO/AFP via Getty Images

US President Donald Trump’s decision to recognize Moroccan sovereignty over Western Sahara has been met with criticism in the disputed African territory.

One Western Sahara media activist said that the administration’s decision was unsurprising and that the United States has backed Morocco in the conflict for years.

“The US position is not new,” Mohamed Mayara of Equipe Media told Al-Monitor. “It has supported Morocco since 1975."

On Thursday, Trump announced that Morocco and Israel had agreed to establish full diplomatic relations. The news followed similar normalization agreements made by the United Arab Emirates, Bahrain and Sudan this year.

Trump also declared that the United States recognized Morocco’s sovereignty over Western Sahara alongside the Morocco-Israel news. Most of the international community does not recognize Morocco’s control of Western Sahara and the United Nations considers it a non-self-governing territory. Morocco came to control most of the area following the end of Spanish colonial rule in 1975. Some parts of the territory are controlled by the Polisario Front, which leads the Sahrawi Arab Democratic Republic and has fought Morocco for control there. The front also has a large presence in refugee camps in Algeria.

The president also endorsed Morocco's proposal for the region to have autonomy under Moroccan sovereignty. The United States did not recognize either the sovereignty of Morocco or of the Sahrawi Arab Republic for several decades.

However, as per Mayara’s comments, US diplomats under Presidents George W. Bush and Barack Obama did refer to the Moroccan autonomy proposal as serious and credible. US officials have also been reluctant to take a position that would upset or weaken their ally King Mohammed VI of Morocco, according to a 2014 report from the Congressional Research Service.

Mayara said Trump’s policies have been destabilizing. “Trump is causing chaos around the world and supporting dictators,” Mayara said. “We hope the next US administration will follow international consensus.”

Mohamedsalem Werad, who is part of the Saharawi Voice journalist collective based in Sahrawi refugee camps in Algeria, lamented the change in US policy so close to the end of Trump’s time in the White House.

“It's hard to believe that a lame-duck President Trump, with less than two months left in office, has changed the entire policy just to score a quick foreign policy win,” Werad told Al-Monitor.

Many people in Western Sahara consider the new US position illegitimate because they do not recognize Morocco’s claims to the territory.

“The US cannot recognize Moroccan sovereignty over Western Sahara, simply because Rabat has none,” said Werad, citing the UN position.

He added that the Secretary-General continues to support a solution in line with UN Security Council resolutions on the issue, including the October extension of the UN's peacekeeping mandate in Western Sahara.

Both Werad and Mayara said a referendum should determine the fate of Western Sahara.

“We as Sahrawis demand the UN take responsibility and a free referendum,” said Mayara.

Some US senators oppose recognizing Morocco’s sovereignty, including Republican Sen. Jim Inhofe of Oklahoma. President-elect Joe Biden, who will succeed Trump in January, has yet to comment on the issue.