Does Cairo need to rethink its Sinai strategy?

Despite the government’s measures to eliminate terrorists from the Sinai Peninsula, the groups are thriving. 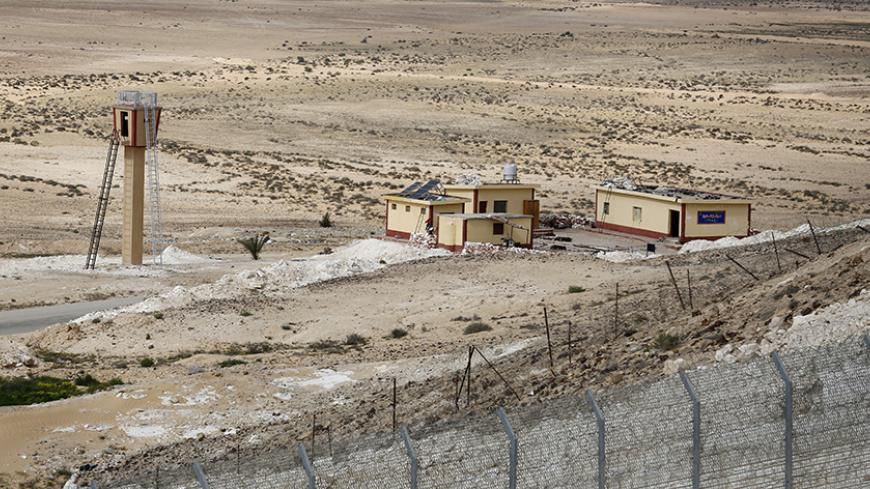 An Egyptian border post is seen from the Israeli side of the border fence with Egypt's Sinai Peninsula, in Israel's Negev Desert, Feb. 10, 2016. - REUTERS/Amir Cohen

CAIRO — “We have gotten rid of 90% of terrorism and insurgency in the Sinai.” “We are striking pre-emptive blows to destroy terrorism sources.” “Soon we will declare Sinai a terror-free zone.”

With such statements, the Egyptian authorities reassure citizens that they are in full control of the situation in the Sinai Peninsula. At the same time, Sinai has been witnessing ongoing and violent terrorist operations targeting members of the Egyptian armed forces and police with heavy weapons and explosives.

Although F-16 and Apache aircrafts continue to strike the terrorists’ dens, terrorist groups are thriving in Sinai, which is seen as their safe haven to carry out plans in a bid to take the area out of state control.

A terror attack in October targeted one of the armed forces’ checkpoints in northern Sinai. The attackers, traveling in SUVs, used mortar shells and bullets to kill 12 members of the armed forces and wound six others. This prompted a fierce retaliation on the part of the Egyptian armed forces, which launched massive airstrikes for three consecutive hours, destroying terrorist groups’ hideouts and weapons caches.

This was not the first time terrorist groups attacked the checkpoints of the armed forces or the police. This scenario has played out several times, where vital facilities and centers affiliated with the security forces were targeted. It all began with the outbreak of the January 25 Revolution in 2011.

On Aug. 5, 2012, terrorist groups attacked a checkpoint of the Egyptian army border guards south of the Rafah crossing while they were having breakfast. The attack killed 16 soldiers and wounded seven others.

This attack was seen as the most ferocious since the outbreak of the January revolution. Egyptian President Mohammed Morsi announced a plan to fully re-seize Sinai, but to no avail.

On Aug. 19, 2013, terrorist groups carried out the second Rafah massacre, where they pulled over two vehicles carrying soldiers returning from vacation and killed 25 soldiers and injured two others. The army responded by shutting the Rafah crossing to and from Gaza indefinitely and started to track down the perpetrators to avenge “martyrs,” as dubbed by the Egyptian army.

Similar to the second Rafah massacre, on June 28, 2014, four soldiers were killed on their way back from vacation at the Balaa intersection. The soldiers were asked to come down from the microbus and show their identity papers that proved they were affiliated with the Egyptian security forces.

In response to the killing of the soldiers, the armed forces launched an expanded military operation and raids on a terrorist hotbed.

On Oct. 24, 2013, terrorist groups carried out a suicide attack that targeted a security checkpoint south of the Sheikh Zuweid town in northern Sinai, killing 26 Egyptian security elements and wounding 29 others. Following the incident, President Abdel Fattah al-Sisi called upon the National Defense Council to hold an emergency session to discuss the security situation in Sinai.

The armed forces evacuated civilians from the border area in Rafah as a prelude to demolishing houses to turn the area into a buffer zone to protect the Egyptian border with the Gaza Strip and to block the road to any terrorist groups.

Despite all the unprecedented measures by the government, such as the declaration of a state of war and the evacuation in addition to the curfew and the state of emergency, the terrorists have not budged or relinquished their plans to attack the army and the police. This raises questions about the reasons behind the resilience of these terrorist groups despite the government’s measures to eliminate them.

Nabil Abu Naja, a military expert and former general, told Al-Monitor that it is now commonly believed that the armed and security forces are unable to purge Sinai of terrorists in light of the ongoing faulty statements by officials confirming that terrorism has been quelled in Sinai. Meanwhile, terrorist operations continue to be carried out in full force, not to mention the assassination of public figures and statesmen.

Abu Naja added that the situation in Sinai is very complex because of the mountainous nature of the area and the presence of some highly trained terrorist insiders among tribes who are difficult to track down.

“Guerrilla warfare ought to be countered with guerrilla war tactics, not with regular armies. Eliminating terrorism in Sinai cannot be done through fixed checkpoints or random attacks with tanks, airstrikes and artillery. The state ought to completely change its strategy and tactics in dealing with terrorism,” Abu Naja said.

“Should the state reinvent its strategy, we could then talk about a timeline for Sinai to be completely free from terrorist dens,” he added.