Assistant Treasury Secretary Daniel Glaser says there has been substantial progress reducing funds amassed by the Islamic State, but warns that IS could seek external financing if it loses its "caliphate" in Iraq and Syria. 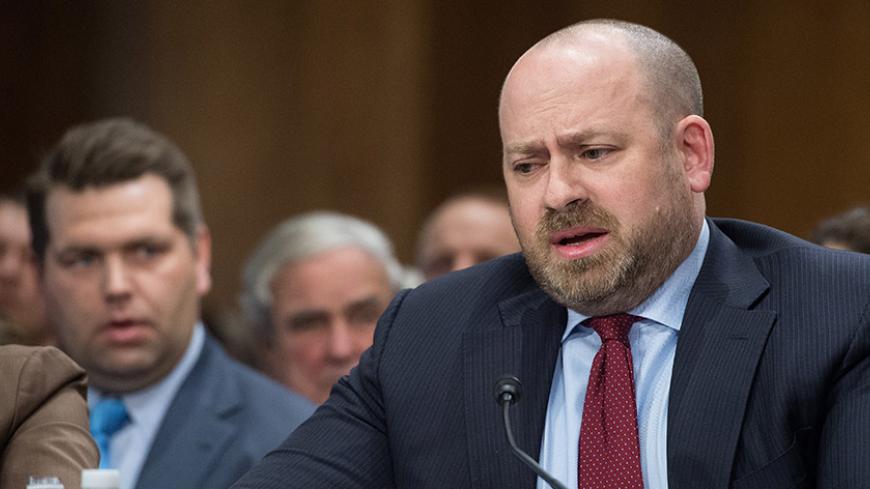 Daniel Glaser, the assistant Treasury secretary for terrorist financing, testifies before a Senate Foreign Relations Committee hearing on the situation in Ukraine on Capitol Hill in Washington, May 6, 2014. - NICHOLAS KAMM/AFP/Getty Images

A senior US official in charge of combatting terrorist financing praised Saudi Arabia for its progress in blocking the flow of funds to groups such as al-Qaeda and said he wished other countries in the Persian Gulf would meet the same standard.

"We have a very willing and capable partner in Saudi Arabia," Daniel Glaser, the assistant secretary for terrorist financing in the Office of Terrorism and Financial Intelligence, told an audience at the Washington Institute for Near East Policy on Oct. 13. "Our goal is to see a similar evolution in Qatar and Kuwait," which he said had made some progress but not to the same extent as the Saudi government over the past decade.

Glaser's praise for Saudi Arabia as the "No. 1" US partner in the region combatting terrorist financing comes at a time of severe strain between the United States and the kingdom over other issues, including the Saudi bombing of civilians at a funeral in Yemen and new US legislation that permits the relatives of those who died on Sept. 11, 2001, to sue Saudi Arabia in US courts. President Barack Obama vetoed the bill, but was overridden by the US Congress, which may revisit the issue after US presidential elections in November. The Obama administration has also said it is reviewing its support for the Saudi bombing campaign in Yemen.

Bruce Riedel, a longtime expert on Saudi Arabia and the Persian Gulf and a columnist for Al-Monitor, said Glaser was correct in his assessment of Saudi efforts to stop money from going to al-Qaeda affiliates. Riedel noted that Saudi Crown Prince Mohammed bin Nayef had been the target of at least four assassination attempts, including a 2009 suicide attack by a young Saudi militant who claimed to have repented. Nayef survived but reportedly still suffers pain from wounds incurred, Riedel said.

"The Saudis do take seriously the business of funding al-Qaeda," Riedel told Al-Monitor. On the other hand, he said, "I've heard a lot of complaints about the Kuwaitis."

The Kuwaiti Embassy did not respond to a query about its record on combatting terrorist financing. However, the Qatari ambassador, Mohammed Jaham al-Kuwari, told Al-Monitor in a phone interview on Oct. 14, "We have made a lot of progress in this aspect" and that remaining problems involved only "some individuals" about whom Qatar was asking for additional information.

"This is a problem in many countries, not only Qatar," the ambassador said. "It is even in America and in Asia, Africa and Europe."

The issue of external funding has been less urgent in combating the group that calls itself the Islamic State (IS) because it has relied primarily on internal revenues.

According to Glaser, the group had access to an estimated $1 billion in 2015, half from oil and gas, about $360 million from "taxation and extortion" of local populations under its control and the remainder as reserve cash pilfered from banks in Mosul after Iraq's second-largest city fell to IS in 2014.

Glaser said a US-led bombing campaign that began last November has substantially reduced IS’ oil revenues by targeting the "entire supply chain" of oil and gas extracted, refined and sold by IS to clients that include the government of Syrian President Bashar al-Assad. Glaser pointed to what he called "signs of financial distress" as IS cut back salaries to fighters by 50% and increased "arbitrary fees, fines and taxation. He said there has also been a rise in internal corruption in IS-controlled areas, an "increase of people with their hands in the cookie jar" trying to get access to diminishing resources.

Riedel said another measure of IS' growing challenges is a reduction in the group's social media output reported recently by the Combating Terrorism Center at West Point. "There has been a significant decline in the last several months, and part of that is funding," Riedel said. "They don't have the money."

The United States has not been able to work with the Assad government directly to choke off the flow of money to IS, but it has enjoyed greater success in Iraq. Glaser said the Iraqi government has shut off access to 90 Iraqi bank branches in IS-controlled territory. The Iraqi Central Bank has also published a list of about 100 exchange houses in IS-held areas. "Millions of dollars from these blacklisted exchange houses have been blocked," Glaser said, but more needs to be done over the long term to shrink a sector that includes 1,900 exchange houses.

US officials and analysts foresee the demise of IS' "caliphate" after the eventual recapture of Mosul and Raqqa, perhaps within the next six months, but warn that the group may revert to a more traditional terrorist organization and seek to raise funds from external donors as its ability to tax local populations wanes. IS members may also defect to other jihadi organizations.

Riedel told Al-Monitor that IS fighters in Syria "could well end up going to the Nusra Front or whatever al-Nusra calls itself." Jabhat al-Nusra recently changed its name to Jabhat Fatah al-Sham (Conquest of Syria Front) in an effort to broaden its appeal to other opponents of the Assad regime and increase its external funding.

While Saudi Arabia has succeeded in blocking funds to al-Qaeda offshoots, some Saudi individuals have managed to send money to Jabhat al-Nusra via bundlers in Kuwait and Qatar, according to Glaser and Matthew Levitt, a terrorism expert at the Washington Institute. Saudis trying to send money to terrorist organizations "primarily have to send it elsewhere to Qatar and Kuwait," Levitt told Al-Monitor.

Riedel said the Afghan Taliban is also "still getting an awful lot of money from private sources" in the Persian Gulf, as evidenced by the multiple trips former Taliban leader Mullah Akhtar Mansour took to Dubai before he was killed by a US drone strike in Pakistan in May.

"Getting rid of [IS] is a good thing to do, but the track record of al-Qaeda is that this is an incredibly resilient concept," Riedel added. "A lot of people involved with the idea die, but the idea doesn't die."