The battle to defund Islamic State

US-led efforts to reduce revenue streams to the Islamic State are hampered by the group's relationship with Syria and the refusal so far of Qatar and Kuwait to act against financiers targeted by the United States and the United Nations. 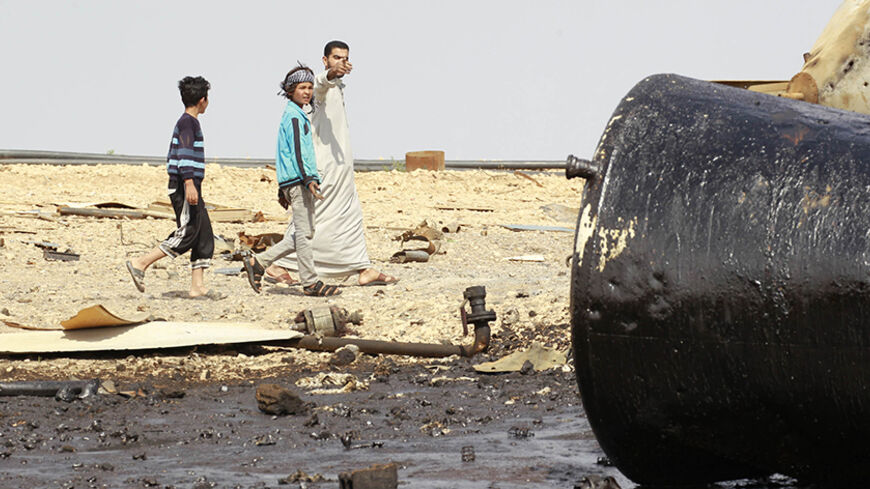 People inspect damage at an Islamic State-controlled oil refinery that was targeted by what activists said were US-led airstrikes at al-Khaboura village, near the Syrian town of Tell Abyad of Raqqa governate, Oct. 2, 2014. -

Treasury Undersecretary David Cohen said Oct. 23 that the US government is in "the early stages" of a complex campaign to cut off funds to the group that calls itself the Islamic State (IS) — an effort complicated by collusion between IS and the regime of Syrian President Bashar al-Assad and the refusal of Qatar and Kuwait to act against several known terrorist financiers.

Cohen, in a rare public appearance in Washington, told an audience at the Carnegie Endowment for International Peace that the United States was also working with Iraqi authorities to try to prevent IS from using banks in captured territory without completely shutting down "all financial activity in those areas" and further penalizing their suffering residents.

IS is the “best-funded terrorist organization we have confronted,” Cohen said. He said the group earns at least $1-2 million a day from selling oil and at least $20 million a year in ransoms for kidnap victims. It also amasses money, he said, from selling women into sexual slavery, looting antiquities, stealing agricultural products and other forms of extortion inflicted on the millions of Iraqis and Syrians under its control.

"We have no silver bullet or secret weapon to empty ISIL's coffers overnight," Cohen said, using an alternative acronym for the group. But Cohen, who heads the Treasury department dealing with financial intelligence, said his staff was using tools developed over the past 10 years of working to disrupt al-Qaeda and enforce other sanctions in a sustained effort that would show progress over time.

Among the challenges they face is an unanticipated consequence of sanctions against the Assad regime. Starved of access to legitimate energy sources, "the Syrian government has made an arrangement to purchase oil" from IS, Cohen said.

Syria has also profited from the international focus on IS that has allowed it to concentrate its firepower on other rebel groups.

US and other coalition forces have been bombing oil fields and refineries captured by the group in Syria and Iraq but have not been able to stop all production. Another complication is long-standing smuggling in the region.

IS is selling "oil at discounted prices to middlemen, including some from Turkey and also to Kurds in Iraq and resold to Turkey," Cohen said. US officials have raised the issue and "Turkish and Iraqi Kurdish authorities have made commitments" to stop the smuggling, he added, without saying whether those commitments have been successfully implemented.

Cohen sidestepped a question from Al-Monitor about conflicting objectives of members of the anti-IS coalition, which now includes, he said, more than 60 countries and organizations, including 10 that are participating in the military campaign.

The Turks and several of the Arab members of the coalition appear as or more interested in trying to overthrow Assad as in defeating IS. Turkey also fears empowering Syrian Kurds who are allied with the Turkish Kurdistan Workers Party movement. Turkey only recently permitted several hundred Iraqi Kurdish fighters to join the campaign to save the Syrian Kurdish town of Kobani.

Cohen also conceded cooperation from the Arab countries on the Persian Gulf was less than perfect. While IS “derives a relatively small share of funds from deep-pocketed donors,” Cohen said, Qatar and Kuwait have been less helpful in blocking funds collection and transfers than Saudi Arabia and the United Arab Emirates.

The Saudis “are deeply committed to ensuring that no money goes to ISIL, al-Qaeda or the Nusra Front [al-Qaeda’s official affiliate in Syria],” Cohen said. The United Arab Emirates, he added, had just agreed to set up a bilateral task force with the United States against terrorist financing.

In contrast, he said, both Qatar and Kuwait “have more work to do.” While the emir of Qatar recently promulgated a new law intended to regulate charitable donations, Cohen said there were terrorist financiers designated by the United States and the UN in Qatar “that have not been acted against” and Kuwait is “also home to a number of US- and UN-designated terrorist financiers.”

What is particularly troubling, Cohen added, is that the Ajmis in Kuwait have raised money through Twitter appeals.

The sophisticated social media campaign by IS has also helped it attract recruits. Cohen said an estimated 15,000 foreign fighters from more than 80 countries have joined the group in Iraq and Syria.

Despite IS successes, Cohen said that its rapid acquisition of territory could prove to be its Achilles' heel. For example, he said, the Iraqi government has budgeted more than $2 billion annually for the areas that IS now controls.

“ISIL cannot possibly meet the most basic needs of the people it seeks to rule,” Cohen said.

Ultimately, he added, the group can only be defeated through a combination of means, including the establishment of inclusive governments more appealing to Iraqi and Syrian Sunnis.