Friends of Syria Deliver Nothing New

The radical elements in the Syrian opposition continue to worry the West, writes Tulin Daloglu. 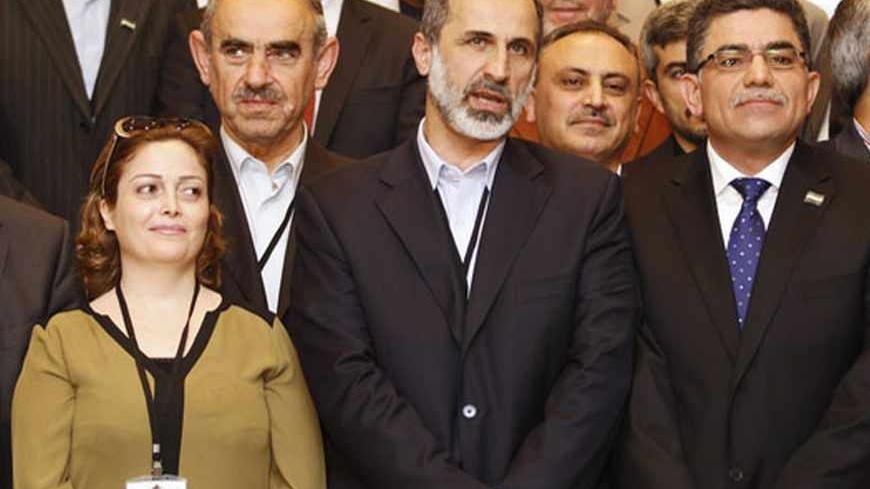 “Enough of the ongoing bloodshed,” Turkish Foreign Minister Ahmet Davutoglu said during the opening of the press briefing early Sunday morning [April 21] after a six-hour meeting of the Syrian opposition and its 11 main foreign supporters in Istanbul. But the question for the past two years since the Syrians took arms to bring down Syrian President Bashar al-Assad's regime remains unanswered: How will this bloodshed end?

Davutoglu said, “What’s important is that these 11 countries are determined to express a clear support to the Syrian National Coalition (SNC), and that they presented a political will to do all kinds of work to stop the massacres.” These 11 countries besides Turkey are the United States, the United Kingdom, Saudi Arabia, Jordan, Egypt, United Arab Emirates, Qatar, Italy, Germany and France.

A Syrian opposition figure, who asked to remain anonymous, told Al-Monitor that the main challenge in the meeting was “for a millionth time to persuade the Westerners to agree to provide arms to the opposition, but they still have reservations because of the radical elements.” One senior opposition figure also told Reuters: “The world must know if they don’t agree on our right to receive weapons this will be the last meeting the opposition attend. We will not attend any meetings after this.”

It is, however, impossible not to take into consideration the radical and extremist elements of the opposition when devising a policy. Especially when there is a growing sense that they are more dominant on the ground than the Free Syrian Army, which is mostly composed of defected members of the Syrian military. Although it will be difficult to square the mentality, but many in the region — from diplomats and intellectuals to the general public — are convinced that the West is creating the chaos in the region on purpose, bringing the Islamists to power. With that perspective, there is no doubt that the SNC is getting frustrated and actually fighting against the conviction alive on the Arab streets, where people believe that it was the United States that created al-Qaeda in the 1980s to fight against the Soviet Union in Afghanistan, and that the horrific 9/11 terrorist attacks in New York and Pennsylvania, and on the Pentagon, have all been part of this grand strategy.

Now al-Qaeda Iraq’s public allegation that the Jabhat al-Nusra is a loyal group working under their umbrella, and that they would follow orders of Ayman al-Zawahri, Osama bin Laden's successor, is a development that deserves attention. Syria’s fragmented opposition is therefore no less to be blamed for the ongoing stalemate, as Jean Loup Samaan, an Al-Monitor contributor, succinctly argued.

Assad tried to create a public opinion in the region on Wednesday [April 17], during an interview with Syrian news channel al-Ikhbariya by playing to this sentiment. “The West had paid heavily for funding al-Qaeda in its early stages,” Assad said. “Today, it is doing the same in Syria, Libya and other places, and they will pay a heavy price in the heart of Europe and the United States.”

Not that there is any thinkable easy solution to the mess created in Syria and the region at large, but it will also be wrong to downplay the wrongdoings of radical Islamist groups. Supposedly this is what Turkey, Qatar and Saudi Arabia have been doing in the meetings in support of the SNC.

A Turkish Foreign Ministry official attending the meeting told Al-Monitor that Turkey, Qatar and Saudi Arabia do not have the same concerns over Islamist groups as the West does, and that it is no secret that there were serious discussions in the meeting about the radical elements in the opposition. The German Foreign Minister Guido Westerwelle expressed openly his government’s hesitation about providing any kind of military aid, especially weapons, to the opposition unless it becomes clear that they distance themselves from the “terrorists and extremists.” Many Europeans bluntly express their concerns over the proliferation of arms. Yet, British Foreign Secretary William Hague also said on Sunday [April 21]: “This is a discussion we have to have in the European Union over the next six weeks. We and France have said there will be a strong case for lifting the embargo, amending the embargo.”

“We have been telling them there is no reason to be concerned of the Islamic front, and that we need to focus on the big picture — that is the removal of Assad from power,” the Turkish Foreign Ministry official told Al-Monitor. “Once Assad is gone, al-Qaeda won’t stay long in Syria.” He went on to say that Syria is a unique country where all different ethnic and religious backgrounds had lived in harmony. One may also remember a similar argument for Iraqis before the US invasion in 2003, where it was strongly argued that there was no division between the Sunnis and Shiites there. But whatever the mistakes of the US invasion have been, in the end it was the Iraqis themselves who killed each other over sectarian divisions.

While these debates continue, there clearly is no firm decision that will actually yield the way to oust Assad from power — if it’s the ultimate goal in ending the bloodshed in the country. More troubling, not finding a solution to end the bloodshed also increases the risks of chemical weapons falling into the wrong hands. Yet, a close look at the demands of the Syrian coalition to the friends of Syria show that they have achieved almost no concrete accomplishment from this meeting in Istanbul either.

“There are many confirmed reports, including NATO’s, that the Assad regime has fired ballistic missiles from known locations toward densely populated areas, mostly in the northern parts of the country, in addition to other locations. Other reports confirm the Assad regime’s use of chemical weapons against civilians in several densely populated areas in the country, including the suburbs of Damascus,” the SNC statement read. “The technical ability to take specific action to prevent human tragedy and suffering of innocent civilians, mostly women and children, is available in the form of specific intelligence and equipment. Syrians understand that such ability is within the reach of a number of members of the Friends of Syria Group, yet nothing serious has been done to put an end to such terror and criminality.”

What the SNC has been asking for is nothing short of a military strike to these locations. But the West is still reluctant to engage in the Syrian theater militarily. On the contrary, US Secretary of State John Kerry pledged to double his government’s non-lethal aid to opposition forces in Syria to $250 million. While the Arab League decided to provide military support to the Syrian opposition, the Istanbul communiqué did not say a word to approve of a decision that would serve to legalize the arms flow into Syria from countries such as Saudi Arabia and Qatar.

In light of Turkey’s strong praise to the bravery of the Syrian people fighting against the regime forces, the Syrian opposition falls short of getting the support that it desires. Yet, SNC members made it abundantly clear in Istanbul that the international community has a moral duty to help them in bringing the Assad regime down, but that they should have no influence on how Syria’s future is shaped. And if they really mean what they say, they really need to understand that no one will commit their national treasure in blood and money to save Syrian lives for nothing. This is not how the international order operates.