Will state of emergency become the new normal for Turkey?

Turkish President Recep Tayyip Erdogan appears to be contemplating extending the state of emergency in Turkey beyond 12 months. 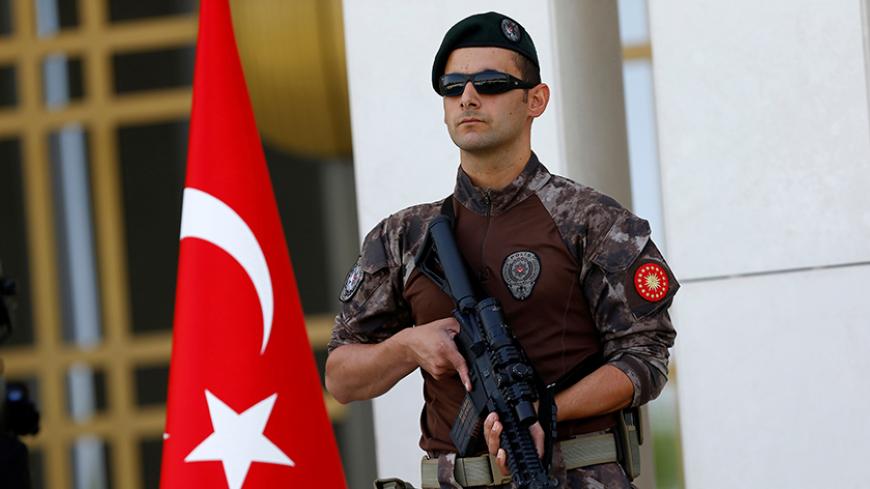 Within a week of the failed July 15 military coup in Turkey, the government declared a three-month state of emergency. According to the Turkish Constitution, a state of emergency can be declared for a maximum of six months. After the coup attempt — which took more than 240 lives and left nearly 2,200 people wounded — the declaration of a state of emergency on July 20 seemed to many to be legitimate and fully justified.

Following the Islamic State's attacks in Paris in November 2015, the French government had also declared a state of emergency. Therefore, in Turkey, although the announcement that certain clauses of the European Convention on Human Rights were suspended, it did not create great concern in the political circles in the country or in the West that would normally react negatively to such a move. Perhaps worries inside and outside Turkey were also eased by the government's opting for a time frame of three months, even though the constitution allows a maximum of six months, in addition to some soothing remarks by high-level officials.

That said, no one experienced in analyzing governance in Turkey and objectively knowledgeable about the inclinations of the ultimate decision-maker, Erdogan, harbored any illusions: Once the state of emergency took effect, it would remain so for the foreseeable future.

The same Bozdag disclosed in September, two months into the state of emergency, that 32,000 people had been arrested and about 70,000 were subject to some form of legal action. He spoke of the possibility of a new wave of arrests and emphasized that the “process,” meaning the relentless crackdown, was still underway. The figures Bozdag cited did not even represent the total number of people currently affected by the purges. Tens of thousands of civil servants have lost their jobs. Nobody can predict when it will all come to an end.

The National Security Council, an advisory body chaired by the president and whose members include the highest-ranking military and security officials and a number of ministers, convened Sept. 28 and recommended that the state of emergency be extended beyond the initial three-month period. After a six-hour meeting, it released a statement, using a mastery the Turkish political lexicon to typically present an oxymoron in convincing fashion: “It has been agreed to recommend an extension of the state of emergency in order to ensure the continuity of the effective implementation of the measures aiming at protecting our democracy, the rule of law and the rights and freedoms of our citizens.”

Turkey never had a broad debate on infringing on democracy, ending the rule of law and violating the rights and freedoms of individuals to an unprecedented degree. Yet, the National Security Council communique spoke of the extension of the state of emergency in order to ensure the implementation of the measures to protect all that is being trampled.

In a way, it might seem farcical. Following the National Security Council meeting, Erdogan said, “Extending the emergency rule for three months will benefit Turkey.” In a televised speech, he addressed Turkish and international audiences, saying, “Be patient, maybe even 12 months will not be enough.”

Erdogan's remarks came after Moody’s had downgraded Turkey’s credit rating to “junk,” citing “high political risks and volatile investor sentiment” among other reasons. Moody’s decision was traumatic for the government and triggered angry responses from officials, above all from Erdogan. While markets were already fragile in the wake of the credit downgrade, Erdogan’s statement, perceived as signaling the continuation of the political crackdown in Turkey, pushed the country further toward instability as reflected in the Turkish lira’s dramatic fall against the US dollar.

Ruling Turkey through emergency decrees, effectively bypassing the parliament, is Erdogan’s choice but is also backed by Nationalist Action Party Chairman Devlet Bahceli. Consolidating nationalist backing and the support of a relatively (and perhaps for Erdogan, sufficiently) large domestic nationalist constituency, Erdogan might be wondering whether he can rule under a state of emergency for the foreseeable future, making it the new normal.

Given the signs of a deteriorating economy, would running the country under a long-term state of emergency be sustainable? Financial experts are clear on this issue: Their consensus is no. Turkey cannot for very long continue in the direction it has been going.

Those who think Turkey cannot go on much longer like this should remember the bicycle theory — if you stop pedaling for too long, you fall. One needs to keep pedaling. After the failed coup, the relentless crackdown on the dissent that Erdogan associates with the alleged Gulenist conspiracy against his power was adopted as the most effective form of rule to guarantee Erdogan's survival.

To rule a Western-aligned country permanently under state of emergency, suspending the European Convention on Human Rights indefinitely, would not only be untenable in the eye's of Turkey’s allies in the democratic world, but would also accelerate the downhill trajectory of the Turkish economy, once seen as an exemplary emerging market. In addition, Turkey, under a state of emergency, would gradually make it a liability for the Western security system rather than a reliable ally.