How Turkey is becoming a snitching paradise

The aftermath of the July 15 coup attempt has seen a surge of informants in Turkey, compounding an already terrible climate of fear. 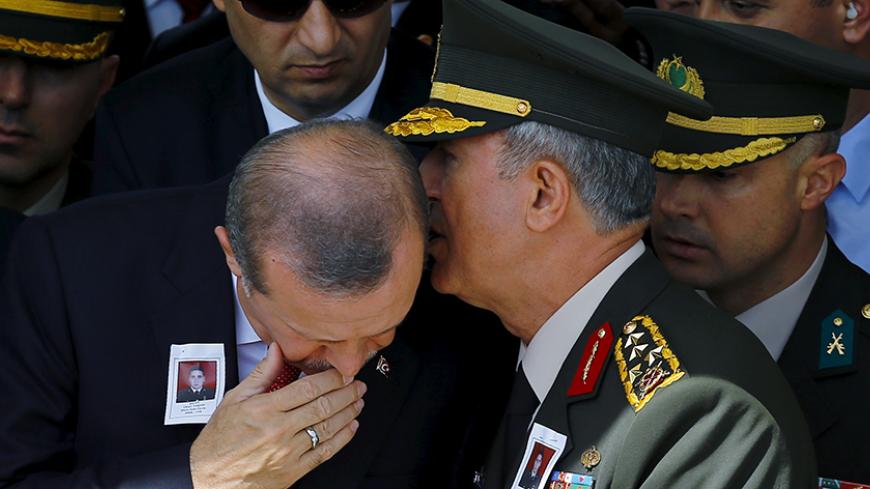 In August 2015, amid mounting violence and terrorist attacks in the mainly Kurdish southeast, President Recep Tayyip Erdogan urged mukhtars — village and neighborhood leaders — to back security forces' intelligence-gathering efforts. "I expect support on this issue from our mukhtars as well. I know my mukhtars [are aware] what kind of people live in which house. They [need to] go to their governors or police chiefs and report this to them in an appropriate and calm manner," he said. Around the same time, the authorities launched an electronic Mukhtar Information System, ostensibly to expand intelligence gathering to every household.

Now, in the wake of the July 15 coup attempt, ordinary citizens are feeding intelligence services. Haberturk daily reported Oct. 1 that the number of tipoffs to the National Intelligence Organization (MIT) has exceeded 10,000 per month, up from about 2,000 before the putsch. Similarly, the number of visitors on the MIT's website has grown from 90,000 to 250,000 per month. The main target of the informants is the Gulen community or the Fethullah Gulen Terror Organization (FETO), as Ankara calls it, which stands accused of the coup plot. With a fivefold increase in tipoffs, the people's enthusiasm seems to be strengthening the informant mechanism.

The MIT website has a "How can you help?" section, which includes a form for the person's name, surname, telephone number, email and residential address. Then there is the "Your message" box, in which citizens can write the information they want to convey. Staying anonymous is also possible. Citizens are assured that their messages are protected by Secure Sockets Layer (SSL) encryption against "the intervention of third parties" and that "any information, which is not imaginary and does not involve grudge and rests on real facts/evidence, is important for MIT and is being evaluated."

The MIT's emphasis on evidence is important. However, when it comes to the fivefold increase in tipoffs after the putsch, there is one detail that should be carefully considered. Most of the tipoffs come complete with the names and telephone numbers of the informers, even though they are not obliged to reveal their identities. This suggests that people might be seeing the tipoffs as a way to shield themselves against being stigmatized as FETO members. Such pre-emptive efforts at self-protection would make perfect sense, given the ferocity of the hunt for Gulenists, which has led even Erdogan to admit that irrelevant people are being vilified. As such, intelligence services are supposed to filter the tipoffs with care.

Sezgin Tanrikulu, a human rights lawyer and deputy for the main opposition Republican People's Party (CHP), is concerned that the tipoff mechanism is a recipe for human rights violations. He told Al-Monitor, "Encouraging citizens to snitching is objectionable according to the principles of rule of law. Uncovering crimes is, ultimately, the duty of the state's security organs."

"Citizens' views on crimes are important, but in situations where their accuracy is very difficult to test, snitching leads to myriad human rights violations. False tipoffs result in people being unfairly accused, stigmatized and detained. Hence, encouraging people to inform on others and acting on the basis of such tipoffs alone is wrong," the CHP lawmaker said.

He stressed that said tipoffs were different from information "aimed at resolving a murder or uncovering drug trafficking" and warned, "This leads people to grow suspicious of each other, eradicates trust and damages societal peace."

The tipoff mechanism is encouraged through awards. On Aug. 31, 2015, the government issued a decree introducing monetary awards for informants who contribute to the capture of offenders wanted under the Anti-Terror Law. It also created an award commission, chaired by the undersecretary of the Interior Ministry. The amount of the award is determined according to the significance of the information and the importance of the crime or the offender it helps to uncover, with the ceiling set at 200,000 Turkish liras ($65,000). But in cases where the offender is a senior leader of a terrorist organization or the total impact of the uncovered crime is too significant, the award can be increased up to 20 times.

Along with the MIT, the Interior Ministry, too, has seen a surge in tipoffs. The daily Star reported in late March that nearly 114,500 citizens had called the ministry's anti-terror tipoff line after Aug. 31, 2015, when the award system was announced.

The surge of informants has compounded the climate of fear in the aftermath of the coup attempt, marked by massive purges in the public sector, property confiscations, thousands of arrests and a further clampdown on the media. In an article on Oct. 14, Hurriyet columnist Ertugrul Ozkok spoke on behalf of "educated Turks who lead and want to lead a Western lifestyle," describing a growing sense of anxiety over Turkey's course. "We can't figure where our country is heading or being dragged to. We have no idea where our future lies and what will happen to us and our families," he wrote. "We are citizens, but we feel second class. We are voters, but we feel our votes are worthless. … Turkey is gripped by fear — fear of falling victim to terror, fear of a civil war and a war abroad, fear of losing sons in military service, fear of having properties confiscated, fear of being locked up for whatever reason."

The climate of fear is bound to persist as long as emergency rule continues, because the extraordinary measures Ankara employs often blur the line between the guilty and the innocent, especially when informants are so ready to help. The state of emergency, declared five days after the attempted coup, was extended for another three months on Oct. 19, with Erdogan warning that even "12 months may not be enough."