Why Turkey’s Gulenist purge is going way too far

The Gulenist threat to Turkish democracy was not a myth, yet the anti-Gulenist purge itself is now also a major threat if it continues along the same path. 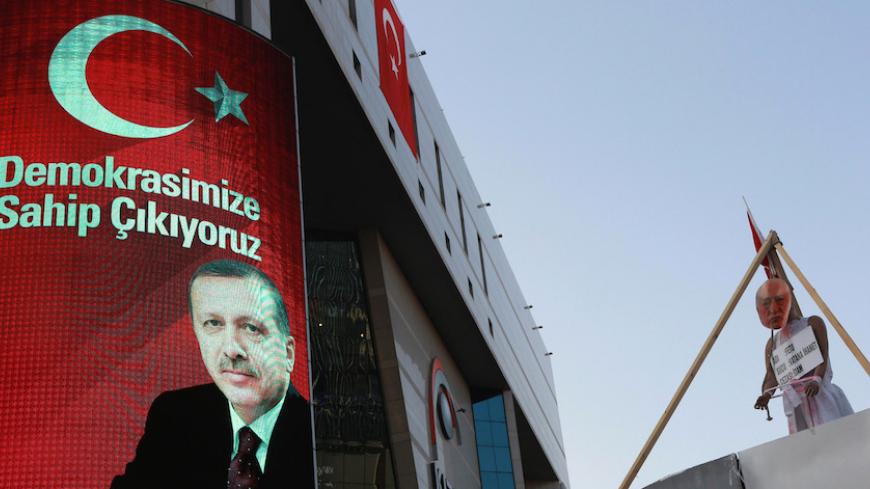 A billboard presents an image of Turkish President Recep Tayyip Erdogan (L) while an effigy of US-based preacher Fethullah Gulen (R) is displayed at Kizilay Square in Ankara during a protest against the failed military coup, Aug. 2, 2016. - ADEM ALTAN/AFP/Getty Images

Since July 15, when a military coup attempt shook the nation, Turkey has been going through major upheaval. With the state of emergency, the government assumed extraordinary powers, which led to the suspension or firing of more than 100,000 public servants and the arrest of some 30,000 people from various walks of life. And now, even those who initially supported this major purge are raising questions, if not alarm.

I was among those who initially supported the purge, with reservations and warnings, because the coup plot was apparently not merely the work of some rogue officers, but a much larger “state within the state” established by the Islamic cult led by Fethullah Gulen. So the government had the right to dismantle this network, which was not only responsible for many past crimes, but could also constitute future threats.

Of note, the main opposition Republican People’s Party (CHP), President Recep Tayyip Erdogan’s secularist rival, also initially supported the purge. “Removal of coup supporters is normal,” said CHP leader Kemal Kilicdaroglu on July 28, also identifying these coup supporters as members of the Fethullah Gulen Terror Organization (FETO), the name Ankara uses to refer to Gulenists. However, as the purge continued with increasing zeal and scope, Kilicdaroglu’s concerns increased, as did those of many other independent observers. “The Turkish government is going too far,” Kilicdaroglu declared Aug. 28. A report prepared by his party further warned Sept. 5 that even “leftists [and] Ataturk supporters” were now targeted in what has turned into a “witch hunt.”

So, what exactly has gone wrong?

One major problem is what defines a Gulenist in the criminal sense. Surely, being a sympathizer of the group, a mere religious follower of Gulen or supporting the group for its legal activities such as education and charity cannot be crimes. It can only be a crime to take part in the group’s covert mechanism that infiltrated the state and violated the law. However, neither the police nor the courts seem to care about such nuances now. Many people are suspended or even arrested as FETO members for merely having social affiliations with the group. Alas, people can even be arrested merely for having Gulen’s books in their homes.

The other problem is the question of who is a Gulenist within the state. Since Gulenists within state institutions strategically hide their identities, their purge is on one hand a necessary task, but on the other hand it is a perfect recipe for a witch hunt. The government is claiming that it is sensitive to this risk. A government spokesman explained to the press that they are using some objective criteria such as internet communications, including the “ByLock” app that Gulenists seem to have used as an internal messaging system. But word has it that more zealous undertakings are going on, as every institution is asked to make lists of FETO members and some people are using it to get rid of their foes or just invent criminals to prove their patriotism.

One example of showing how far the wave has gone is the arrest of dozens of journalists who merely wrote for newspapers owned by the Gulen group. Since the group is now officially a terrorist organization, they are blamed for terrorist propaganda. What these journalists objectively did, however, was only criticize the government in some of the few remaining non-pro-government media outlets in Turkey.

The legal justification a court expressed while arresting one of these journalists, Atilla Tas, who is also a singer, was chilling: “Helping the [terror] organization knowingly, without being within the organization hierarchy.” The problem is that millions of people in Turkey can be blamed as such, including members of the governing party, including Erdogan himself, for “helping” the Gulenists in a myriad of ways. But, of course, the government saved itself from that risk, by carefully — in fact, hypocritically —designating its 2013 political break with the Gulenists as “the milestone” of the latter’s evolution into a terrorist group.

There are many other chilling aspects of the purge, including the freezing and even confiscation of private property. Major companies are being taken over by the government for “supporting terrorism” (for example, for donating to the Gulenist network), and even bank accounts of the arrested individuals are frozen. In fact, a government minister proudly declared Sept. 1 that $4 billion worth of “FETO real estate was seized and transferred to the state.” This is a colossal earthquake on property rights, without which the rule of law cannot simply exist.

Meanwhile, a terrifying wave of intimidation is going on in the media and social media. As a pro-government writer critically noted in his column in daily Yeni Safak, “Whoever does not like somebody, the writer condemns that person in his column, newspaper, TV channel or social media account as a member of FETO. And nobody says ‘stop’ to this.”

None of this should mean that the Gulenist threat to Turkish democracy was a myth, as Gulenists themselves would like to portray these days. Yet the purge itself is now also a major threat if it continues in the same direction.

Notably, even some pro-government voices are acknowledging this now, such as Ahmet Tasgetiren, columnist for the pro-Erdogan daily Star. The pious Islamic pundit wrote a series of recent articles warning against hurting the innocent while pursuing the guilty. Many innocent people are in jail under bad conditions, he wrote, as thousands of families have lost jobs. People denounce each other as a FETO member merely out of hate, he added, and people in bureaucracy or judiciary are afraid of “looking as if not fighting against the Gulenists effectively.” Turkey’s conservative Muslims lost many of their values during these bitter struggles, he added, including “the fear of God.”

The government must listen to such conscientious voices in its camp. It should also listen to the main opposition CHP and other secular Turks who warned against the Gulenist infiltration of the state long before it turned into a problem for the government.

Meanwhile, Western governments and institutions should use all their political leverage on Ankara to help sustain the rule of law and prevent more violations of human rights. They should begin, however, by establishing trust. This means first understanding and acknowledging the peculiar threat that Turkey has faced, and then explaining how to deal with it in more legitimate ways than the current mood of the fervent witch hunt.