Just like the United States after the 9/11 attacks, the Turkish state has a right to defend itself; but now, just like the US government after 9/11, Turkey may be seriously overreacting. 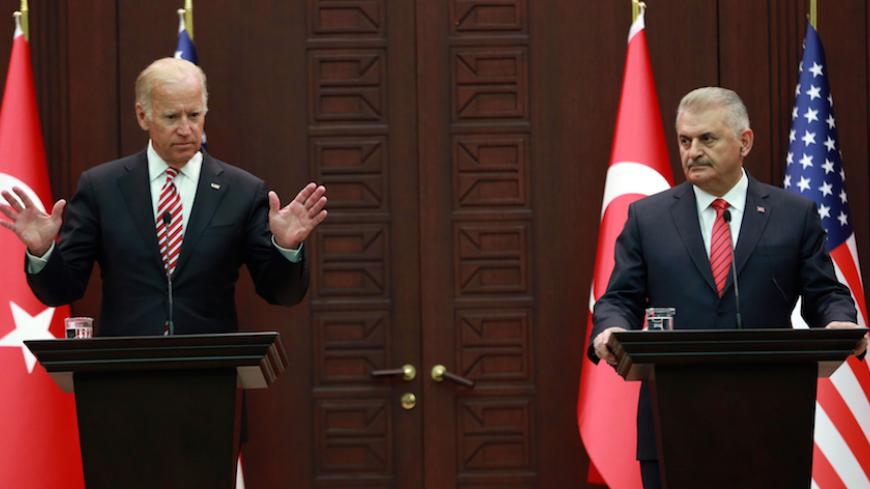 When US Vice President Joe Biden visited Ankara Aug. 25 to repair Turkish-US relations, which have been strained since Turkey's failed July 15 coup attempt, he offered an interesting analogy. After examining the ruins at the Turkish parliament bombed by the putschists, he compared Turkey's trauma to America's experience after 9/11, urging reporters to "imagine if the plane that crashed in Pennsylvania on Sept. 11, 2001, had made it to the US Capitol." He added, "Imagine the psychological impact on the American people."

Some Americans disliked this analogy, blaming Biden for "using 9/11 victims for political points." Yet in fact, Biden was right; 9/11 is actually a good analogy to understand the impact of the failed coup on Turkish society. The death toll in these attacks, admittedly, were unequal: There were 10 times more victims on 9/11 than during Turkey's coup. Still, just like 9/11, the coup attempt was the greatest attack the Turkish nation has faced in decades. Moreover, just like after 9/11, the Turkish state now has a right to defend itself and eliminate an immediate threat.

Yet, again just like after 9/11, there is a serious risk of overreaction.

Why was Turkey's failed coup such a traumatic experience? Turks have seen at least four military coups before, but never saw their parliament being bombed, their president barely surviving an assassination squad or their compatriots shot dead by officers or crushed by tanks. The latest coup attempt was a major ordeal — despite being shrugged off by skeptics, who — just like "9/11 truthers" — suggest that it must have been an "inside job."

There are other similarities between Turkey's coup plot and America's 9/11. In both cases, the governments declared that the attackers were not mere criminals who came together ad hoc for a particular crime. After examining the connections of the attackers, the culprit was identified as a broader terror organization. For the United States, it was al-Qaeda. For Turkey, it is now what the government and many of its foes call the Fethullah Gulen Terror Organization — the secretive side of an Islamic cult led by US-based Turkish preacher Fethullah Gulen.

Just remember that no one had claimed the 9/11 attacks, and the US government did not wait for a court decision to take on al-Qaeda. It rather followed "actionable intelligence," and called on its allies to join its "war on terror." This was not merely about punishing those who had attacked the United States, but also averting future threats. This exactly is what the Turkish government is doing now.

However, there is a major difference between al-Qaeda and the Gulenists that makes the situation extremely complicated. Al-Qaeda is proudly a violent organization that declared war on the United States. The Gulenists, on the other hand, seem to be the exact opposite. Gulen himself denies all charges, and the group appears as nothing but a moderate movement preaching peace, love and tolerance.

Nevertheless, as put by Turkey's investigative journalists — most of whom are also fierce critics of President Recep Tayyip Erdogan — and also former Gulenists who defected from the group, the visible part of the Gulen empire is only one part of it. The other part is a four-decade-old meticulous infiltration of key state institutions such as the military, judiciary and the police. By hiding their allegiances, and using various illegal tactics, the Gulenists have created a "state within a state" responsible for ruthless witch hunts against the group's enemies, and finally, it seems, the coup plot of July 15.

That's why Turkey’s "war on terror" is now taking place not in the high mountains of Afghanistan, but the dark corners of Turkish bureaucracy. That's why, after the coup, a process that began earlier was hastened: the de-Gulenification of the state. As I argued before in Al-Monitor, this is only a legitimate response to a criminal cadre within the state.

There are some worrying excesses, however, that can turn this legitimate response into the government's own ruthless witch hunt. Since the coup, more than 80,000 civil servants lost their jobs, including more than 2,500 judges and prosecutors. Moreover, more than 20,000 people have been arrested. It is very likely that some of these are innocent people who joined or supported the Gulen community merely for its legal activities such as charity, education or religious training. The suspended judges and prosecutors were also arrested and had their financial assets frozen — depriving them of the chance to hire lawyers, let alone sustain their livelihoods. It is quite possible that many innocent people will be jailed for months and even years based on mere suspicion — as was the case with the establishment of the detention facilities by the United States at Guantanamo Bay after 9/11.

The alleged mistreatment of some of the top suspects, including torture as per Amnesty International, is even more disturbing. Many Turks ignore such alerts by human rights advocates these days — as some Americans did with torture at Guantanamo Bay and the "black sites" of the US Central Intelligence Agency, only to leave a permanent stain on their country's human rights record.

In foreign relations, Erdogan also seems to be launching a post-9/11 strategy: You are either with us or against us. He declared, "The United States has to choose either the Gulenist terror cult or Turkey." A constructive dialogue between Ankara and Washington would be better. For that, Ankara must present its legal case against Gulen persuasively, while US authorities must be vigilant but also empathize with their ally's distress. Hopefully, Biden's visit can be a step forward in that regard.

Finally, what will really define Turkey's future is a key question: Is the government merely willing to eliminate a clear and present danger to Turkish democracy, or is it inclined to use this as a pretext for a broader political design? Many people believe that after 9/11, the United States chose the latter option by occupying not just Afghanistan — which was hosting al-Qaeda — but also Iraq, whose "weapons of mass destruction" were never found.

In the Turkish case, the analogous question is whether Erdogan and his supporters will actually only focus on the real threat of the Gulenist infiltration within the state, or exploit this crisis to crack down on all political opponents. Both scenarios are possible, for while there has been a positive effort by Erdogan since the coup to reach out to the opposition, there is also a fervent pro-Erdogan zealotry to make the president the unquestionable savior of the nation — a second Ataturk. Friends of Turkey should engage with it now to help the first dynamic be more definitive in the nation's uncertain future.