Western observers first must understand the severity of Turkey’s coup plot and the complexity of the religious group that seems to be behind it. 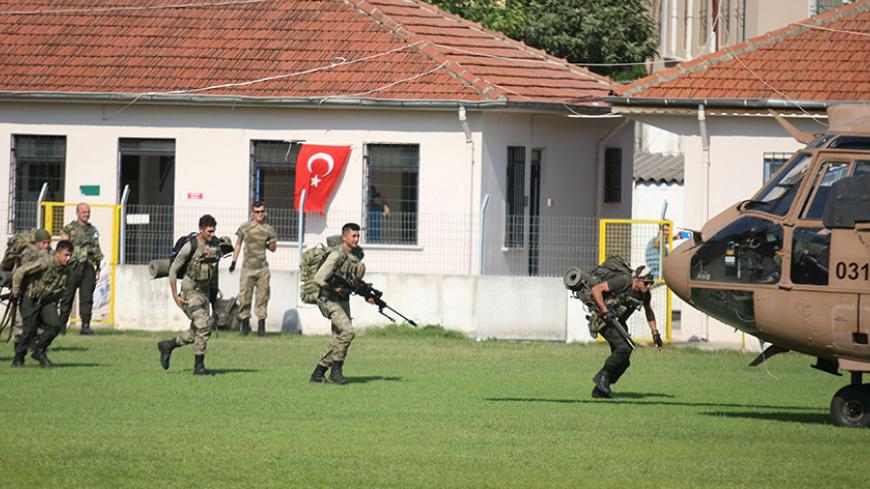 Turkish commandos take part in an operation to search for missing military personnel suspected of being involved in the coup attempt, in Marmaris, Turkey, July 22, 2016. - REUTERS/Kenan Gurbuz

If one needs to define what is going on in Turkey in the aftermath of the failed July 15 coup attempt, besides the arrest of the actual putschists, here is an accurate term: The de-Gulenification of Turkey. Just like the de-Baathification process in post-occupation Iraq, the aim is to cleanse the whole public sector from a cadre that is considered to be the enemy of the state.

First, let’s see how Turkey came here. The infiltration of state institutions — especially strategic ones such as the police, the judiciary and the military — by the Gulen community is a fact harped on by secular journalists for decades. When President Recep Tayyip Erdogan’s Justice and Development Party (AKP) came to power in 2002, the infiltration went even further, for Erdogan considered Fethullah Gulen a key ally.

With the defeat of the common secular enemy, these two Islamic powers began to dispute and ultimately resent each other. The AKP had the legitimacy of popular support, while the Gulenists had the cultish self-confidence that they know everything better.

When political war between these two groups broke out in late 2013 with a Gulenist-orchestrated corruption investigation, I took a nonaligned position: The corruption was real, so the AKP had to be honest about it. Meanwhile, it was clear that the Gulenists had indeed created a “parallel state” within the state that had to be cleansed, but their “civic wing,” (schools, charities, media and economic assets) had to be respected. Among the political leaders of the time, only Abdullah Gul seemed to support that position. After the bloody coup attempt of July 15, however, it is impossible to pursue such nuances in Turkey. Even the “civic institutions” of the Gulen community are being seized by the state, for they are seen — not so wrongly so — as breeding grounds for, or the facades of, the dark side within the state.

The reason for this massive purge must be understood first, before being criticized. The coup plot of July 15 was, arguably, the greatest assault the nation has ever seen since its founding in 1923. In no previous coup or coup attempt was the nation’s parliament bombed or its civilians crushed by tanks. Moreover, not just the government, but also the chief of staff, the National Intelligence Organization, all major opposition parties, mainstream secular media, many anti-Erdogan journalists and most nongovernmental organizations seem to all agree that this coup was mainly a Gulenist operation, as a last-ditch effort to topple Erdogan, who had become the Gulenists’ No. 1 enemy.

One may wonder why this national consensus in Turkey is not reflected at all in Western media. My answer is that while Erdogan’s authoritarianism, of which I have been quite critical, is all blatant and clear, Gulenist operations are always stealthy, covered nicely by successful public relations and insistent denial of involvement. That is why many Western journalists keep on believing that the only problem in Turkey must be Erdogan and everybody who opposes him must be “good guys.” This even makes them open to anti-Erdogan conspiracy theories, such as that he orchestrated the coup just to get political credit, which is totally ridiculous given the fact that the coup was very well-organized and nearly succeeded.

Of course, the truth can come out only at the end of a fair trial, as I argued in The New York Times. But even at this point, the Turkish state has the right to defend itself by outing the people in its ranks who are suspected to be members of the Gulenist network. Being a member of the movement in itself, however, cannot be considered a crime. Hence, I agree with Ali Bayramoglu, the prominent secular liberal who first exposed the “parallel state” in 2010 and who has lately been critical of Erdogan as well, who wrote:

“It is inevitable that government employees about whom there are serious suspicious of being a Gulenist will be demoted to passive positions or will be fired. Legislation for this end will be only natural. But this logic cannot be used in prosecutions. It cannot be a crime to work in Gulenist institutions or to have relations with Gulenists. Being a member of the Gulen community is not a crime either. It is only a crime to be within the illegal organization and the illegal actions of the group. Even then, principles such as the presumption of innocence and individual criminal responsibility have to be upheld.”

But will these principles be really upheld by the government, which is not only alarmed by but also furious about the Gulenists?

There are some worrying signs. First of all, the recent report by Amnesty International suggesting that some of the suspects may have been subject to torture, even rape, is horrifying. The government must prevent all such crimes against the detainees, no matter how guilty the suspects may be, and “give independent monitors access to detainees,” as Amnesty International demanded.

Second, those who are to be detained now include journalists who have merely written in pro-Gulen media outlets, either as Gulenists themselves or merely as Erdogan opponents who have no religious connection with the group. This is unacceptable, unless there are serious signs that the journalists in question knew about the coup plot and tried to help it. It is only good news that one such journalist, the renowned human rights defender Orhan Kemal Cengiz, who has no religious ties with Gulenists, has been released after being detained for three days.

Third, there is clearly a furious mood among Erdogan’s supporters, which may turn the prosecution of the coup plot into a crackdown on all “traitors,” which for them may easily include mere Erdogan critics. The government must not give in to this zeal, or take advantage of it. Quite the contrary, it should use this opportunity to build a broad democratic consensus in Turkey, as most mainstream commentators are rightly calling for.

Western media, nongovernmental organizations and governments can help Turkey in this critical period by calling for restraint and lawfulness and by criticizing human rights violations. But in order to be taken into account, they first must understand the severity of the coup plot and the complexity of the religious group that seems to be behind it.