Turkey’s president has called on community leaders in villages and neighborhoods to report on “terrorists” in their communities. 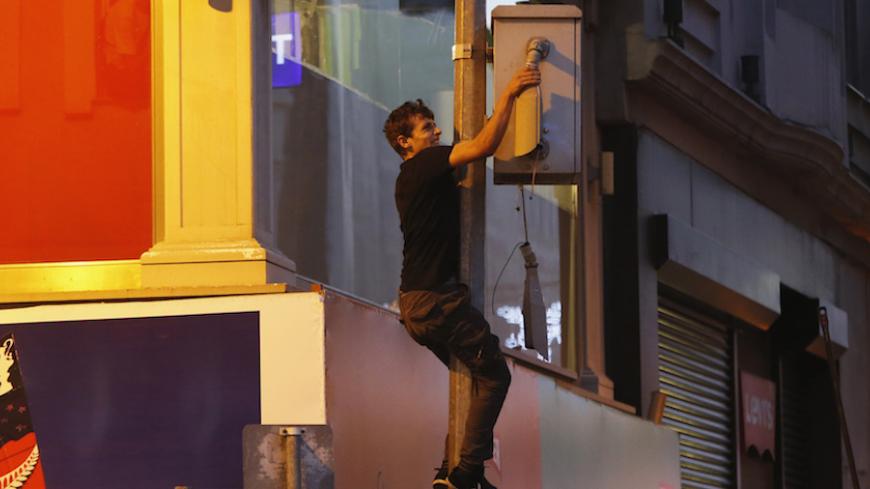 In his cult novel "1984," George Orwell described a dystopian world of people under constant government surveillance. In a letter to an American trade unionist, Orwell wrote he believed a society similar to the one he imagined could one day become a reality. The world we live in today may not be the exact nightmare the writer imagined, but it often fills us with fear that our lives are closely monitored. This may explain why "1984" has been back on the best-seller list in Turkey in recent years. Its popularity may surge even further after the country’s more than 50,000 mukhtars — leaders of neighborhoods and villages — were tasked with informing the government on fellow residents.

Since January, President Recep Tayyip Erdogan has delivered monthly speeches to mukhtars, invited in groups to his palace in Ankara. At the eighth meeting on Aug. 12, he spoke about the need to boost intelligence-gathering against Kurdish militants amid a surge of terrorist attacks since the June 7 elections, and tasked the mukhtars with a new duty. “I expect support on this issue from our mukhtars as well. I know my mukhtars [are aware] what kind of people live in which house. They [need to] go to their governors or police chiefs and report this to them in an appropriate and calm manner,” he said.

About 400 mukhtars from different provinces have been invited to each meeting. Ahead of the meetings, the mukhtars were briefed about the electronic Mukhtar Information System, supervised by the Interior Ministry, in a bid to make them branches of the state’s intelligence system that penetrates each village and neighborhood, along with official intelligence bodies.

During the Aug. 12 meeting, Erdogan also warned government officials that they must facilitate the jobs of mukhtars and respond to their needs. “A smart administrator is supposed to listen carefully to all demands mukhtars raise for their neighborhoods and the people who live there and do what is necessary. You see what happens to those who fail to hear the voice of the people, don’t you?” he said.

Beyond issues of concern for mukhtars, these gatherings have become a venue for Erdogan to convey political messages on various issues. And when he invited another group of mukhtars on Aug. 19, the expectation was that he would reveal his position on ongoing political uncertainty after the June 7 polls, in which the Justice and Development Party lost its parliamentary majority. Prime Minister Ahmet Davutoglu, who currently heads a caretaker government, had failed to form a coalition government and returned the mandate to Erdogan the day before.

And so it happened. Overriding political tradition, Erdogan clearly signaled that he would not give the mandate to Kemal Kilicdaroglu, whose Republican People’s Party (CHP) came second in the elections, raising the prospect of early elections.

Then, in another reminder to mukhtars of their “intelligence” duty, Erdogan said, “Mukhtars should know who lives in which house in their neighborhoods. They certainly know which people are terrorists and must report this to the nearest security unit.”

Not all mukhtars, however, attend the gatherings in the presidential palace as the lists are drawn up by Erdogan’s aides. Some have not turned up despite being invited. According to Erdogan, this was because they were threatened by Kurdish militants. “I know that many mukhtars were threatened and could not come to this gathering today,” he said.

According to the Bugun newspaper, mukhtars can report anything about residents in their neighborhoods through a special line in the Mukhtar Information System, a software program designed by the Interior Ministry’s data processing department. Using their citizenship numbers and verification codes, they are able to enter the system and pass any information to state institutions under various topics, including complaints, wishes, tip-offs, opinions and proposals. The messages go first to the Interior Ministry’s Local Administrations Directorate, which redirects them to the relevant agencies.

The tip-off line, it emerged, has been operational for six months. Opposition parties reacted furiously. Oktay Vural, the parliamentary whip of the Nationalist Movement Party, charged that the government was turning Turkey into a "mukhabarat [secret police] state," while CHP Deputy Chairman Sezgin Tanrikulu submitted a written parliamentary question to Davutoglu. He asked for the number of people who had been profiled on the basis of information supplied by mukhtars and the names of officials who had reportedly assured mukhtars that the complaints, demands, suggestions and tip-offs they submit through the system would be “redirected to competent bodies and urgently resolved.”

Levent Gok, the CHP’s parliamentary whip, lashed out at Erdogan, charging he was seeking to turn mukhtars into informants and spies. “The president is encouraging mukhtars to spy and inform on their neighbors who have elected them to those posts. The president, who is trying to polarize society, has effectively admitted that he is seeking to create his own mukhabarat state,” Gok said.

Some 53,000 village and neighborhood mukhtars are currently on duty in Turkey. They are elected in municipal elections held every five years, but run independently with no official affiliation to political parties. Mukhtars are responsible for relaying to relevant authorities citizens’ records on issues such as birth, death, military service and residency relocation.

Before the president tasked the mukhtars with this new duty, he ameliorated their financial situation. In 2014, the pay mukhtars receive from the government was doubled to 900 Turkish lira ($308) per month. Additionally, they generate income from small fees charged for issuing documents such as residence certificates and certified copies of ID cards. Some mukhtars in larger, more crowded neighborhoods can earn up to 3,000 Turkish lira per month ($1,030). Yet, they pay with their own means for their social security and office expenses.

Erdogan has so far received about 4,000 mukhtars in the palace. “God willing, we’ll come together with all 50,000 mukhtars of the country in such gatherings,” he said in March.

But the head of the Turkish Mukhtars Federation, Ramazan Ozunal, shows little enthusiasm for the president’s initiative and casts doubt on the Mukhtar Information System. In remarks to Al-Monitor, Ozunal stressed that mukhtars’ duties were outlined in the relevant law, adding: “Rhetoric and legality are two different things. The mukhtar’s function cannot be a dual one.”

He said, “We deal with the requests of various state agencies like the police, tax authorities and the land registry. We deal also with the requests of citizens related to civil registry, residence or military service records. Mukhtars are obliged to meet all lawful demands, serving as a bridge between the state and the people. We’ve conveyed a 36-point declaration to the government and all political parties on modernizing [mukhtar services]. We’ve conveyed our demands, making it clear we can assume more responsibilities if we are granted more legal powers.”

The head of the Turkish Mukhtars Federation has not been invited to the palace so far, which reinforces the impression that only “select” mukhtars make it onto Erdogan’s guest list.