Looking to snitch on your neighbors? Turkey will pay you for the info

The Turkish government has hiked the pay of some elected leaders for providing intelligence about people in their neighborhoods. 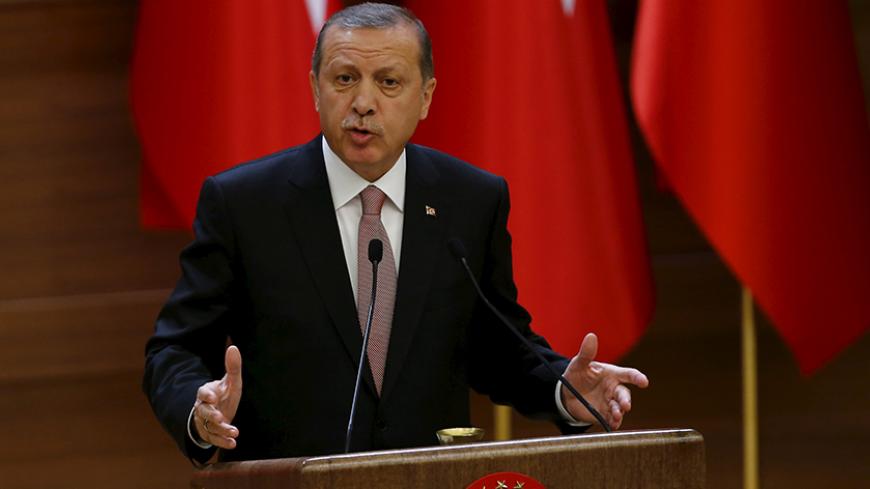 Turkish President Recep Tayyip Erdogan makes a speech during his meeting with mukhtars at the Presidential Palace in Ankara, Nov. 26, 2015. - REUTERS/Umit Bektas

Mukhtars are moving up in the world. Since President Recep Tayyip Erdogan moved to his controversial palace outside Ankara in November 2014, the mukhtars — elected heads of villages and towns — have become his prominent guests. They were the first group to be invited to the fancy palace, and Erdogan continues to receive groups of 300-400 mukhtars at a time.

There are about 53,000 mukhtars in Turkey. Erdogan plans to meet with all of them.

At the palace, mukhtars first hear a motivational speech by the president while their excited applause and standing ovations are generously carried live on television. After lunch, they return to their villages or city districts.

Why this sudden interest in mukhtars? Until August 2015, mukhtars were paid for simply drawing up documents about citizens’ residences and identities and then putting an official stamp on them.

But at their August meeting, the supreme official of the state tasked the lowest officials with an additional duty. Erdogan said, “My mukhtars will keep track of who lives where and will report it properly to the nearest district governor and police chief. With this intelligence, we will know what is happening in each house."

The president's instructions can’t be found in the legislation pertaining to mukhtars. Yet mukhtars are being designated as a kind of intelligence official.

According to an Aug. 15 report in the daily Bugun, mukhtars report all their findings through a special computerized information system. Their messages first go to Ministry of Interior’s Directorate of Local Administrations and from there they are forwarded to the relevant state organs.

Opposition parties claimed that the government was taking advantage of mukhtars by having them double as informants. To counter that complaint, mukhtars were given financial perks and their monthly allowance was raised far above other civil servants.

Some might think that despite all these increases the mukhtars are still paid a paltry allowance. But this is not their only income. For every document they stamp, they are paid 5 Turkish lira, which usually provides significant revenue. There is a long list of candidates at every election fighting to get elected. Now that mukhtars are tasked with a prestigious "micro-intelligence function" in addition to ever-rising allowances, even more people will be competing to get elected.

And that's not all: In October, Prime Minister Ahmet Davutoglu announced that henceforth, Oct. 19 will be celebrated every year as Mukhtars Day. Such recognition is needed, Erdogan said, to call attention to the role of the mukhtar. Erdogan said Turkey needs mukhtars in all facets of life, and he called on all civil servants to help them. “A good senior official will listen carefully to all requests conveyed by mukhtars and find solutions for them. That is all I need to say," Erdogan said.

Successive allowance increases, a special day designated for them, visits to the Presidential Palace and their new function of collecting intelligence in villages and districts are bound to enhance the motivation of mukhtars.

At the moment, it is difficult to see what kinds of abuses and complications these grass-roots intelligence operations in villages and city districts will entail. But this amateur intelligence network, shrouded in secrecy, certainly presents high risks for common citizens.