The arrest of six prominent human rights activists in Turkey on terrorism-related charges marks a new phase in the suppression campaign of the Erdogan regime. 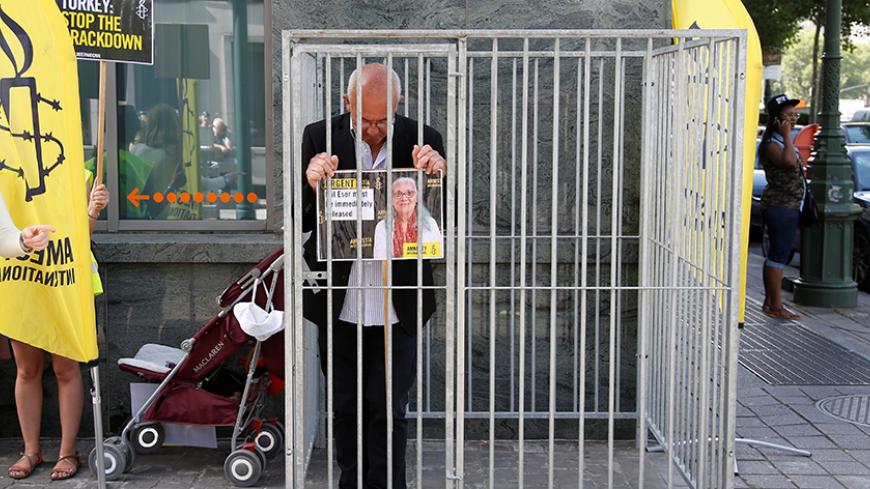 Amnesty International Belgium's director, Philippe Hensmans, poses in a cage in front of the Turkish Embassy in Brussels to protest the detention of his Turkish counterpart Idil Eser, Brussels, Belgium, July 10, 2017. - REUTERS/Francois Lenoir

The Turkish government’s massive crackdown since last year’s attempted coup has targeted not only the putschists, but also the media, Kurdish politicians, as well as leftist, liberal and conservative oppositionists. The latest developments in this crackdown show that the regime is proceeding fast to the lowest point on its path to autocracy.

One particularly alarming omen is the arrest of six human rights activists, including Amnesty International’s Turkey director, following a July 5 police raid on a gathering of civic activists on an Istanbul island. The move indicates that Ankara’s suppression campaign has reached a new phase, turning to local and international human rights groups and civic society.

For Amnesty International Secretary-General Salil Shetty, the arrests represented a watershed. “This is a moment of truth for Turkey and for the international community. Leaders around the world must stop biting their tongues and acting as if they can continue business as usual,” he said, slamming the arrests as a “politically motivated persecution that charts a frightening future for rights in Turkey.”

The events have already had a chilling effect on civic society. The Citizens Assembly, for instance, postponed a “summer school” with Turkish and Armenian participants in Turkey, while the Berghof Foundation canceled a roundtable on the Kurdish problem.

The arrest of the six activists demonstrates how arbitrariness is increasingly permeating the justice system in Turkey. After the police raid on the meeting, a journalist asked President Recep Tayyip Erdogan to comment on the calls for the release of the activists during a press conference at the G-20 summit in Germany. Erdogan claimed the purpose of the gathering was to plan subversive activities similar to the July 15, 2016, coup attempt, which Ankara blames on the Fethullah Gulen religious community. “Upon [a tipoff] received by intelligence services, the police carried out the raid and detained those individuals. They [the activists] are calling for what [the putschists] called. And by asking me this question, you, too, are supporting this call,” he said, adding that it was up to the judiciary to decide the fate of the detainees.

Obviously, Erdogan had already made his decision. While passing judgment, proclaiming it to the world and even accusing the journalist who posed the question, he mentioned not the judiciary but the intelligence, which raises myriad questions over the rule of law. How Erdogan’s statement affected the court’s subsequent decision to incarcerate the activists is another serious question.

Now, a brief account of the events that led to the activists’ imprisonment. Back in April, about 30 activists from various associations gathered in the Mediterranean city of Antalya to discuss the human rights violations and political situation in Turkey as part of an initiative by the Human Rights Joint Platform, which brings together a number of leading advocacy groups, including Amnesty International’s Turkey branch. Given the prevailing climate in Turkey, they opined that rights activists could also face prosecution, which would increase the importance of communication between fellow groups and the security of their websites and digital data. They decided to organize a special meeting on the issue. So that was the meeting the police raided. German national Peter Steudtner and Swedish national Ali Gharavi were present as consultants.

The police stormed the gathering on its fourth and last day, detaining all participants. Someone had reportedly tipped off the police. That person and the police apparently attributed secretive intentions to issues such as the protection of digital data and encryption. According to press reports, the prosecution reached a similar conclusion at the end of the 12-day detention period. Asking the court to remand the activists in custody, the prosecution wrote, “The suspects have followed the secrecy rules of terrorist organizations and talked about police seizing their phones, preserving the data in those phones, concealing the data even if the phones are seized and preventing the data from being seized by the police or others as well as encryption.”

The prosecution’s opinion may have seemed to be a joke to the activists, but soon it turned into a nightmare. Even worse, no direct link was drawn between the raided meeting and the reasons the prosecution put forward for the arrest of the activists. According to defense lawyer Meric Eyuboglu, “The meeting allegedly constituted a crime, but looking to the reasons put forward to justify the arrests, we don’t see a single word about the meeting.”

What constituted the evidence here was the interpretation of information obtained from the activists’ computers and telephones rather than the content of the meeting they held. According to defense lawyers, one activist was questioned about a telephone call with a person who was being investigated for belonging to the Gulen community, while another was accused of links to the outlawed Kurdistan Workers Party (PKK) after a banned book was found in his home.

In sum, the judicial investigation took for granted the tipoff or the intelligence report that incriminated the activists and embarked on an effort to dig out pieces of information to back it up. In other words, it was not following evidence to uncover a crime, but looking for evidence to suit the accused. As a result, six of the 10 detained activists were jailed pending trial, with some being linked to the PKK, some to a radical leftist group and another to the Gulen community, all considered to be terrorist groups in Turkey.

According to the Sozcu daily, the prosecution argued that “the suspects held a meeting aimed at creating movements that would lead to social chaos in line with the goals of terrorist organizations,” noting that “most of the suspects had links with terrorist organizations and were able to influence society due to their areas of activity.” The prosecution then concluded that the suspects “had acted with a deliberate intention to aid [terrorist groups] and had thus committed the alleged crimes,” demanding that the court jail the activists pending trial.

“Nothing is left to say. The law is finished,” defense lawyer Murat Dincer said in comments on the prosecution’s stance. “Anyone who comes up with such a demand is after something else.”

And what could this “something” be? An effort to vilify human rights groups that struggle against rights violations and reach out to the victims? A move to intimidate anyone who might think of engaging in such activities?

Ozlem Dalkiran, one of the imprisoned activists, was one of my closest co-workers from 2008 to 2015, when I chaired the International Hrant Dink Award Committee, an initiative against violence. From 2001 to 2004, we co-managed a large international project called New Tactics and Strategies in Human Rights. A big symposium, which attracted some 400 rights campaigners from seven continents, was held in Ankara as part of the project, backed by a $400,000 contribution from the Turkish government. Erdogan, then prime minister, and then-Foreign Minister Abdullah Gul made the opening speeches at the event, hailing human rights defenders and the importance of their work for a new Turkey. The audience, including Dalkiran and myself, greeted the speeches with applause. It was at this gathering when we had met Gharavi. Now he and the others are behind bars for defending human rights. A dramatic reversal, indeed. 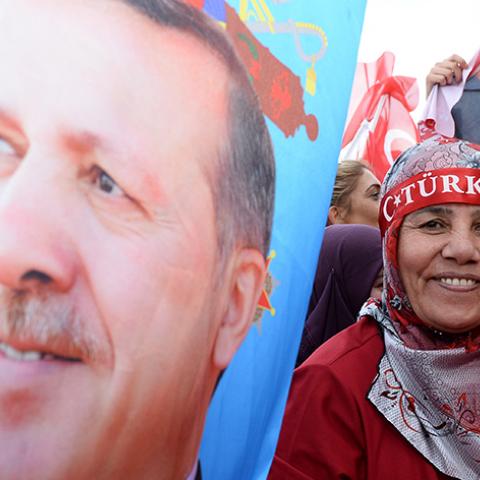