Turkish civil society grapples with the arrests of human rights activists and academics as the government marks the anniversary of the failed military coup. 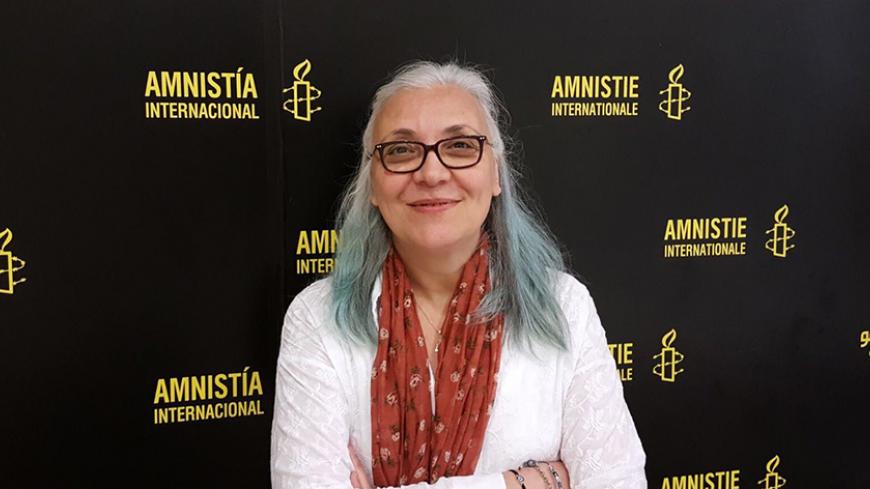 Amnesty International’s Turkey director Idil Eser, pictured here, was one of the 10 people detained as part of a terrorism probe. Posted on July 10, 2017. - Twitter/@englishpen

The detention of human rights activists and academics ahead of the anniversary of the failed July 15, 2016, military coup in Turkey has rattled a once-vibrant civil society, fearful the government is broadening its yearlong clampdown that has already ensnared tens of thousands of people.

On July 5, police raided a hotel on an island off the Istanbul coast where leading rights groups had gathered for a training seminar. Ten people, including Amnesty International’s Turkey director Idil Eser, were detained in a terrorism probe.

Then on July 10, police arrested 42 university staff members, including Koray Caliskan, a former adviser to the main opposition Republican People’s Party (CHP). They are seeking another 30 academics suspected of links to the bungled coup.  Caliskan was sent to house arrest late on Friday, media reported.

“We have crossed a new threshold,” said Andrew Gardner, Amnesty’s researcher on Turkey. “Under the post-coup attempt crackdown, there has been a huge number of assaults on civil society, critical journalists and the political opposition. But this is a direct attack on the backbone of human rights.”

The detentions come as the nation commemorates the first anniversary of the coup attempt, when a faction of the army sought to topple President Recep Tayyip Erdogan in a spasm of violence that killed more than 240 people.

Since then, 50,000 people have been jailed and another 100,000 teachers, judges, police officers and others have been fired from state jobs. A state of emergency that has allowed Erdogan to effectively rule by decree is set to be extended again when it expires next week.

Erdogan has defended the measures as essential to weed out putschists and their sympathizers and restore democratic order. The government blames the coup on followers of Islamic cleric Fethullah Gulen, who lives in exile in the United States.

But some observers say the dragnet has spread well beyond those responsible for the insurrection to include the very people tasked with monitoring allegations of official wrongdoing.

“We see a connection in the timing of the detentions with the anniversary. It is a show of force by the government,” said Hakan Ataman, the co-director of the Citizens’ Assembly, who saw two of its members, Ozlem Dalkiran and Nalan Erkem, arrested on the island.

“Rights groups have unwaveringly called for the perpetrators of the coup to face justice. But they also criticize the way the investigation is occurring — trampling on the law and disregarding human rights.”

As many as 1,400 nongovernmental organizations (NGOs), including those that protect children’s rights and assist battered women, have been shuttered since July 2016. About 150 journalists are in jail, as are 12 opposition lawmakers. In June, a court arrested Taner Kilic, Amnesty’s local chairman, on charges he is affiliated with the Gulen movement.

“Now, with [the detention of] the Istanbul 10, there is a massive chilling effect,” said Gardner, who has worked for Amnesty for four years in Turkey, “Next week it could be me."

The crackdown has alienated Turkey from some of its Western partners. The European Parliament on July 6 called for the suspension of Turkey’s decadelong negotiations to join the European Union if it implements constitutional changes to expand Erdogan’s powers. It called the arrests of journalists and rights defenders a “disproportionate response” to the coup.

Experts from the United Nations Human Rights Council called for Turkey to immediately release the activists, saying it illustrated an ongoing “witch hunt.”

British Prime Minister Theresa May raised the arrests of the activists with Erdogan on the sidelines of a G-20 meeting in Hamburg last week, an embassy official said.

However, US Secretary of State Rex Tillerson this week met Erdogan in Turkey for the second time. The State Department said Tillerson “had an awful lot on his plate” and could not say whether he had asked Erdogan about rights violations.

“The lustration process — removing [Gulen’s] followers — is an incredibly fraught and dangerous process,” said Robert Amsterdam, a lawyer who represents the Turkish government overseas. “A post-coup environment is always an ugly scenario, and you don’t know who to trust.

“The reaction of Erdogan has been the most moderate of any Turkish coup,” Amsterdam said, referring to three previous military interventions since 1960 in which hundreds of thousands of people were jailed and scores died, but he also urged for the protection of rights defenders.

For his part, Erdogan said the activists, who include two foreign nationals, “came together for a meeting aimed at continuing July 15.”

The July 5 meeting on the Princes’ Islands, a short ferry ride from Turkey’s biggest city, was a workshop on electronic security and coping with stress, Gardner said. Eser and the other campaigners are being held for the maximum 14 days without charge.

“The smear campaign, the detentions seek to intimidate NGOs, but they also send a message to society at large,” Ataman said, noting that people are more fearful about registering violations. The work of NGOs has been curtailed under emergency rule as they are regularly barred from making public statements or conducting research.

That so many people continue to face arrest a year after the coup “perpetuates the climate of fear,” said CHP lawmaker Mahmut Tanal.

Caliskan’s arrest “is an attempt to link the CHP with the coup. Arresting human rights workers and academics … is an operation to silence the opposition,” he said.

Like Gardner, Tanal expressed concern that he, too, could be targeted for speaking out. Another CHP lawmaker was sentenced to 25 years in prison in June for leaking a video to a newspaper that purportedly showed government arms shipments to Syrian rebels in 2014.

The worry now is that the damage to Turkish civil society may be lasting.

“If this goes on, it is no exaggeration to say that civil society as we know it — as something that can be critical of the authorities, can hold people to account, is visible — won’t exist,” Gardner said. “It is already a shadow of its former self.”

This should be cause for alarm for more than the government’s current critics.

In its call for the release of the activists, Amnesty reminded Erdogan that it had campaigned for his release two decades ago when he was jailed for reciting a poem deemed anti-secular.