In an interview with Al-Monitor, Jawad Abu Hatab, prime minister of the Syrian Interim Government, discussed the challenges the political and armed opposition face on the ground in Syria. 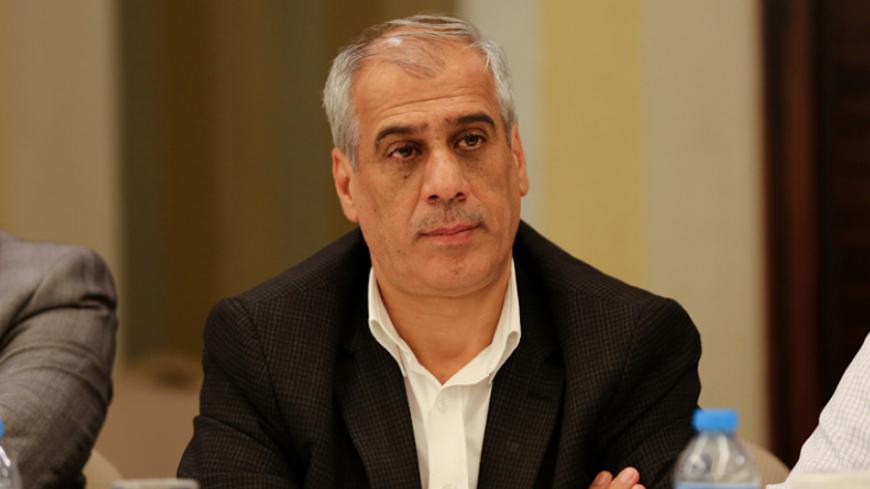 GAZIANTEP, Turkey — Since the establishment of the National Coalition for Syrian Revolution and Opposition Forces, commonly known as the Syrian National Coalition (SNC), in 2012, the Syrian opposition has been seeking a legitimate presence on the ground in the face of the Bashar al-Assad regime. To this end, in November 2013 it formed what it calls the Syrian Interim Government to operate inside Syria. Although the idea seemed a positive development, the government has yet to fully function in light of the ongoing war.

In May 2016, Jawad Abu Hatab was selected prime minister of the interim government, winning the votes of 68 of 98 members of the coalition’s exiled General Assembly.

In an interview with Al-Monitor, Abu Hatab, discussed the Syrian opposition’s role and accomplishments so far and whether the interim government is of any benefit to Syrians and the dilemmas and challenges underlying its efforts. He stressed that qualifications were the main criteria for his government's personnel selection, which, nevertheless, saw the marginalization of Kurdish components. He also said that only the Free Syrian Army (FSA) and Islamist groups — excluding Jabhat al-Nusra (now Jabhat Fatah al-Sham) and Jaish al-Fatah (Army of Conquest) — have a presence in rebel-held areas.

Hatab, a general and pediatric heart surgeon, currently resides in rebel-controlled areas between Aleppo and Idlib.

Al-Monitor:  What is the role of the opposition’s interim government, its areas and mechanisms of operation? How is it being funded?

Abu Hatab:  The main role of the interim government, according to the strategic vision for which it was granted confidence [by the SNC], is to build the government institutions usurped by the Damascus gang [the Assad regime] for decades, in support of the Syrian people’s national struggle and the unity of the country. As for financing, the interim government relies completely on its individual resources and support from other national parties and figures.

Al-Monitor:  Is there a budget plan? Who is funding and supporting the interim government?

Abu Hatab:  As I have just mentioned, during the phase of consolidating the interim government and establishing its ministries and institutions on Syrian territory, our current budget relies on individual resources, and is, to some extent, being supported by national institutions and figures. But as our activities progress and evolve, we will be needing larger and steadier sources of funding.

Al-Monitor:  The interim government is supposed to operate inside Syria, but you have previously stated that this would be dangerous given airstrikes in different regions. How will this be possible amid the ongoing bombing?

Abu Hatab:  The interim government is composed of a prime minister, [other] ministers and employees who are already based in Syria and have, for the past six years, been working under the same circumstances as those of the Syrian people. Two government officials, Local Administration Minister Yaacoub al-Ammar and Deputy Civil Services Minister Jamal al-Ammarin, along with a number of comrades, were recently killed in a suicide attack [during the opening ceremony of a police station in Inkhel in Daraa]. Danger is part of the daily life of the Syrian people, and the interim government and its members are no exception.

Al-Monitor:  You mentioned in a video that the mujahedeen and the rebels are the ones who liberated the western areas of Aleppo and broke the siege imposed on the city’s eastern neighborhoods, saying, “Your unity achieved victory.” In fact, it was Jaish al-Fatah and the former Jabhat al-Nusra that liberated it. Is the opposition willing to cooperate with both of these parties? What is your current perception of them?

Abu Hatab:  Unfortunately, this is inaccurate. The breaking of the Aleppo siege was a joint effort between the groups and factions of the FSA and those of Islamic forces, none of whom claimed to have accomplished this alone. We will continue to cooperate with all those who share the Syrian revolution’s goals, especially that of ousting the criminal gang in Damascus, the Russian and Iranian occupiers, and the sectarian militias backing them. After that, we shall focus on rebuilding and achieving the rest of the goals with the purpose of establishing a state of justice and citizenship.

Al-Monitor:  The Kurdish National Council, which is part of the Syrian National Coalition, issued a statement deploring its exclusion from the new interim government. Why weren’t Kurds given a ministerial portfolio? And why did they accuse you of being racist?

Abu Hatab:  As a matter of fact, the interim government was not based on a quota system. Qualifications and the ability to operate within Syrian territory were the main criteria adopted in that regard, without excluding any party. We requested each party to present candidates for Cabinet positions, taking into consideration all the candidacies. On a personal level, such accusations would be unfair to me. For instance, my mother is of Kurdish descent, and such a categorization is new to Syria in the first place. It was, however, introduced to our practices by parties and agendas unfamiliar with the Syrian reality and with no connection to the national agenda.

Al-Monitor:  You have previously stated that youth employment, education and health care were among your government’s top priorities. How will the interim government manage to promote these sectors within Syrian territory?

Abu Hatab:  A few weeks ago, our Education Ministry completed correction of the official baccalaureate exams, and the results were announced a few days ago. The ministry further announced the University of Aleppo’s entrance exams. The start of the new academic year was postponed as a result of the barbaric and monstrous airstrikes by the Russian occupation and the Syrian regime hitting all liberated areas, especially Aleppo. This should not, however, stop us from providing education services. Last year, as the faculties of the University of Aleppo were under attack, we had to resume the exams in relatively safer places, such as mosques. We are driven by our people’s determination to ensure their children’s right to education under any circumstance.

Our second priority is health care, which has come into the spotlight this year due to the direct and intensifying attacks on medical centers. These attacks aim to increase casualties among Syrian civilians in a bid to discourage the residents of the besieged areas and force them to abandon their towns and villages as part of a planned demographic shift. This was the case in Daraya, Zabadani and Qusair among others. Other liberated areas are undergoing the same, amid an unprecedented international silence and collusion, especially with the targeting of aid convoys, the last being the attack on the UN aid convoy in Urum al-Kubra [on Sept. 19]. However, the international community failed to condemn the Russian occupation and the Syrian regime, although they control the skies above that area. At best, an investigation committee could be formed in order to mitigate the incident and save face.

It is worth noting that prioritizing education and health care should not be at the expense of other sectors such as agriculture, services, institutionalization and promoting the experience of local councils, the remaining sectors and government projects that meet the urgent needs of the Syrian people.

Al-Monitor:  You once said in a meeting that you represent the revolutionary government and that your activities would be limited to rebel-controlled areas, although you are portraying your government as an alternative to the regime. How would you explain this contradiction? Does the opposition really consider itself a possible alternative to the Syrian regime?

Abu Hatab:  The incumbent government is a revolutionary government. Based on that definition, it was able to obtain confidence for its strategic vision. It is true that our scope of work is now limited to liberated areas, but this shouldn’t be construed as negligence with regard to each and every Syrian, whether living in Syria or elsewhere in the world. The Syrian interim government is working today to build national institutions capable of compensating for those lost to the Syrian regime over the past decades. In the past six years, the regime proved to be an actual occupation force, imprisoning, killing and displacing half of the Syrian people amid the world’s silence.

Al-Monitor:  Usually, a government seeks to provide its people with the necessary aid and services in order to gain their trust. You said that the Syrian interim government serves Syrians living in Syria and abroad, although you are currently unable to issue passports and other documents to Syrians. On what basis do you claim that your government represents Syrians?

Abu Hatab:  This is not a claim. It is at the core of the government’s vision and plans. In stable countries, governments undertake several roles and missions, but given the current situation in Syria, needs and missions are much greater, and the government’s duty toward Syrians living abroad cannot be limited to issuing passports. In the meantime, we are working to open service centers for Syrians living in neighboring countries. Indeed, we started in Turkey, and we expect to open similar centers in any country hosting Syrians.

Al-Monitor:  You have mentioned the establishment of a Syrian interim government-affiliated defense ministry, which requires a competent military council. You also revealed that civilians residing in regime-held zones will be safe on condition of being unarmed. Since there isn’t a defense ministry or a military force on the ground defending the interim government, how will your government manage to protect civilians? How would you explain this dilemma?

Abu Hatab:  It is true that there isn’t a defense ministry presently due to the absence, at this stage, of factors that allow an effective and successful ministry. Nevertheless, we do have a military office and an internal security forces council. We are coordinating with our comrades in the FSA and Islamic factions on establishing a military council leading to a defense ministry that constitutes an umbrella for military activities against the regime and its allies in the future.

Al-Monitor:  With which countries does the interim government maintain relations? What is the nature of these ties?

Abu Hatab:  ​The interim government indeed maintains relations with other countries. We have visited the Turkish presidential palace on many occasions. In turn, a Turkish official delegation visited our office in Turkey for the first time after the interim government was among the first to issue a statement supporting [the Erdogan government's] legitimacy in Turkey in the aftermath of the failed coup. A few days ago, a European Union delegation visited us [in private] and stressed [possible] cooperation with the interim government through a number of projects that are being examined. We are also preparing for official visits to a number of countries, mainly the Gulf countries supporting the Syrian people and revolution.

The fact that our government is based in Syria led many countries to change their views and seriously consider developing ties with us. The interim government is keen to follow this path in order to better serve Syrians, empower those living in their home country and guarantee a safe return for those who had to flee so that they shoulder the rebuilding process, which relies on Syrian national efforts. This should be a new example, among others, we have shown to the world throughout the years of our glorious revolution.