Despite the Turkish-Russian agreement on a buffer zone in Idlib, the opposition-held city is preparing for an attack by the regime. 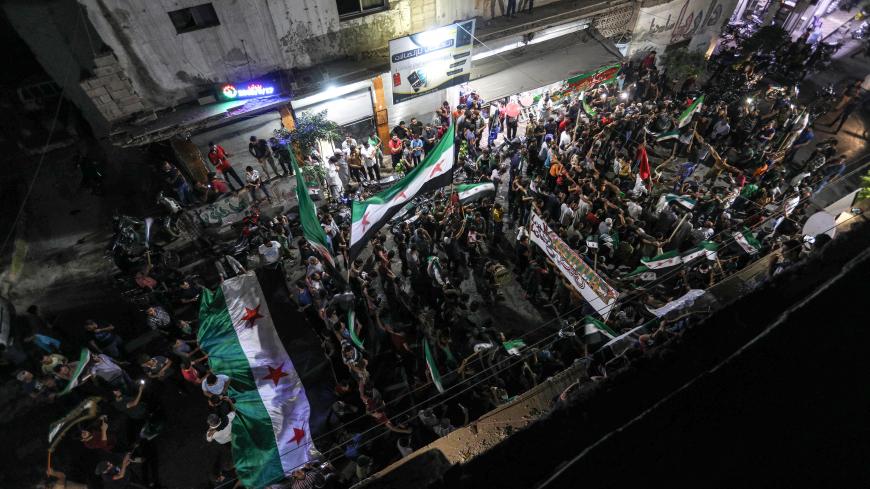 Syrians chant slogans and wave flags of the opposition as they protest against the Syrian government during a demonstration, Binnish, Syria, Sept. 17, 2018. - OMAR HAJ KADOUR/AFP/Getty Images

ALEPPO, Syria — The past few weeks have witnessed unprecedented cooperation and coordination between the Free Syrian Army (FSA) factions of the armed opposition in northern Syria. This has been in tandem with the threats by the Syrian regime and Russia to attack Idlib.

The FSA has been in ongoing contact with Turkey, and the opposition factions are relied on to stop a possible attack by the regime and its allies in Idlib. In addition, the FSA factions have been preparing for a possible battle, which they believe could be the hardest and perhaps the final confrontation.

The FSA factions held their last meeting Sept. 12, at the invitation of the opposition-affiliated Syrian Interim Government. The National Consultative Conference was held at the government headquarters in the city of Azaz in the northern countryside of Aleppo. The meeting was attended by officials from the local councils in the countryside of Aleppo and Idlib, officials from the interim government as well as leaders and officers of the FSA-affiliated national army operating in the Euphrates Shield area in the Aleppo countryside. The head of the interim government, Jawad Abu Hatab, delivered the meeting's closing speech.

On Sept. 5, the interim government held a meeting with a Turkish delegation at its headquarters in the city of Azaz. During the talks, the two sides discussed the situation of the opposition-held areas in Aleppo and Idlib, and actions vis-a-vis the different scenarios that might occur in northern Syria, in the event of an attack by the regime and Russia.

"Several dignitaries and officials from the local councils of Aleppo and Idlib were present at the meeting, as well as lawyers, judges, teachers, doctors and pharmacists from the different areas under the control of the FSA. The attendees looked into the coordination processes between the various sectors and channels of aid in case of an attack by the regime and its allies,” Abu Hatab told Al-Monitor.

He said, “We must do everything in our power to support our brothers in Idlib. We greatly value the help of the Turkish government, which is known for its support of humanitarian positions and for standing by the Syrian revolution. We believe that there have been great efforts to prevent a battle from taking place in Idlib. The Turkish government is throwing its weight behind this and we appreciate this great effort. However, this does not mean that the opposition institutions — civil or military — in northern Syria should not be fully prepared for any surprise, and of course in coordination with the Turkish side."

Abu Hatab added, “The international community must make a greater effort to prevent massacres and forced displacement, stop the shelling and pressure the regime and Russia to abide by the agreement to ease the tension.”

Turkish President Recep Tayyip Erdogan and Russian President Vladimir Putin announced at the end of their meeting on Sept. 17 an agreement to establish a buffer zone in Idlib and its surroundings. This zone would separate the opposition forces and the Syrian regime.

The safe zone agreement enters into force on Oct. 15, provided that heavy weapons are withdrawn from the area by Oct. 10. The zone will stretch across an area of 15-20 kilometers (roughly 9-12 miles).

Intensive preparations by the FSA and the Turkish army for an upcoming confrontation were underway a few days before the agreement. But, despite the agreement, the opposition fears that the regime would not comply with its terms, as had been the case in eastern Ghouta, Daraa and other areas, where there had been agreements with the regime and Russia to prevent any invasions, but to no avail.

The Syrian regime forces have been deploying more troops on the confrontation lines with the opposition forces in the Euphrates Shield area in the northern and northeastern countryside of Aleppo over the past few days. New reinforcements have been supplied for fear of an attack by the opposition on the positions of the regime forces there if the battle were to begin in Idlib.

The FSA factions in the Euphrates Shield area, backed by the Turkish forces, sought to enter regime-controlled areas in the countryside of Aleppo if the regime launches its offensive on Idlib.

Al-Monitor met with Col. Haitham Afisi of the FSA-affiliated national army in the Euphrates Shield area, who attended the consultative conference in Azaz. He told Al-Monitor, “The national army is ready to support our people in Idlib in any possible confrontation. Cooperation between the different opposition factions should continue. We hope that there will be no battle in Idlib for the sake of the millions of civilians living in the FSA-held areas. But we are ready to defend Idlib in case of an attack. We are relying on the agreement between Russia and Turkey, and we really hope it will work.”

The FSA factions in the countryside of Aleppo and Idlib and the opposition institutions, such as the interim government and the local councils, believe they have played a major role in stopping Idlib’s invasion, along with the Turkish efforts. They believe that their coordination and cooperation in the past few weeks have been a concern for the regime and Russia, which made them rethink military action in Idlib.

Al-Monitor also met with Capt. Naji Mustafa, the spokesman for the FSA’s National Liberation Front based in Idlib, who said, “The FSA factions in the Euphrates Shield area in Aleppo countryside as well as the interim government and the local councils have been making intensive efforts to support Idlib. Committees have been formed to look into ways to provide assistance in case of an attack. Delegates from the National Liberation Front have attended several meetings that were held in the northern countryside of Aleppo in the past period.”