The billion-dollar deal that is stirring up Israeli army

Senior IDF officers say that Israel should not have purchased three new submarines from Germany, but rather invested the money in air and ground defense. 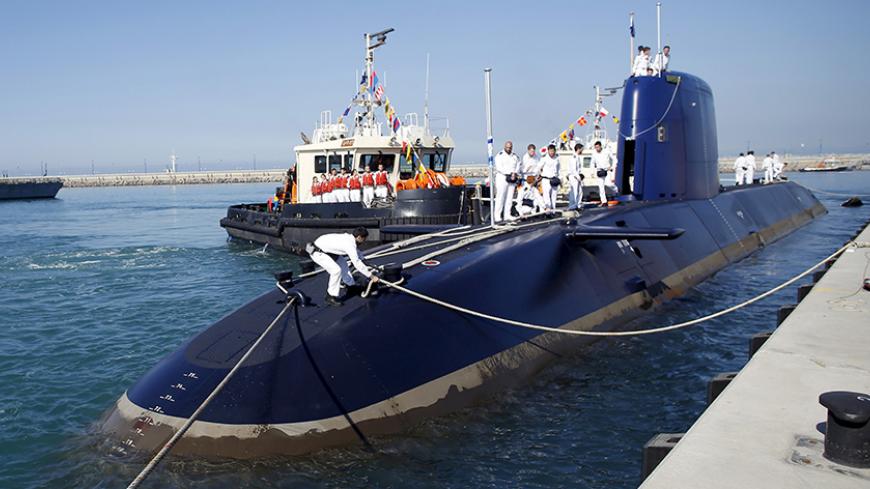 Israeli navy soldiers stand on the Rahav, the fifth submarine in the fleet, as it docks in Haifa, Israel, Jan. 12, 2016. A sixth submarine is due to arrive in 2019, and three more are being ordered. - REUTERS/Baz Ratner

On Oct. 26, the Israeli Cabinet secretly authorized a huge weapons transaction that developed under the radar over the recent year: Three additional Dolphin-class submarines will be purchased from a German shipyard in the port city of Kiel. A memorandum of understanding between Israel and Germany is expected to be signed this month in Berlin.

The deal is assessed at about 1.2 billion euros ($1.3 billion), approximately 400 million euros ($439 million) per submarine, after a discount of about 30% financed by the German government.

The clandestine negotiations between Israel and Germany were relatively brief. Many Israelis are strongly criticizing the deal, from various aspects. One clear conclusion can be reached regarding the policies and strategic mindset of Prime Minister Benjamin Netanyahu: The Iranian threat, including concern regarding a nuclear Iran, continues to preoccupy Netanyahu and assume center stage in his very essence.

According to foreign reports, these submarines (Israel already possesses five of them; the sixth will arrive in 2019) are viewed as the Israeli answer to the Iranian threat, as they are capable of carrying and launching ballistic missiles with nuclear warheads. According to foreign reports, the impressive submarine fleet Israel is building will give the country a significant “second strike” capability even in the event that it absorbs an Iranian nuclear attack. These submarines transform Israel from a “one-bomb country” (which would be so devastated from one nuclear attack that it could not respond in kind) to a state that could respond and cause great destruction to any country that would dare attack it.

In a conversation with Al-Monitor, an Israeli military source emphasized that Israel has no intention of enlarging its fleet of submarines from six to nine, but to gradually replace aging submarines with new ones. According to the source, the life span of a submarine is 20-30 years. Over the next decade, the three oldest submarines in the Dolphin fleet will become obsolete, and will be replaced gradually by the new submarines.

This argument does not convince the naysayers, many of which come from within the Israel Defense Forces (IDF). They believe the tremendous sum of money wasted on the submarines should have been earmarked for more urgent needs. “The first Dolphin submarine will begin to become obsolete only in 2030,” an Israeli security source told Al-Monitor on the condition of anonymity. “Until then, it’s not certain that we will need such a large quantity of submarines. The current commitment to pay billions of shekels in a huge deal for products that may not be absolutely necessary is rather strange, to say the least.”

Critics of the transaction feel that the monies should have been used to upgrade the IDF in more important spheres. “The submarines are not effective in the war against terror,” a high-level Israeli security source told Al-Monitor on condition of anonymity. “Submarines are ineffective in fighting against the Islamic State and Hamas; even the third Lebanon war [if this happens] will not be decided in the ocean depths. It would have been better to spend all this money to provide armored shield protection for all of the army’s armored personnel carriers, or for unmanned aircraft [drones], for cyber strengthening, and other spheres that are critical to the war against terror. Unfortunately, Israel is making its traditional mistake: It is once again preparing for yesterday’s wars and not tomorrow’s conflicts.”

Another debate raging between the sides is connected to the price of the deal. Netanyahu’s main concern, when he pushed for a speedy agreement with the Germans, was that German Chancellor Angela Merkel might not survive the elections awaiting her in 2017. Those close to Netanyahu say that Merkel’s replacement might not be as generous as she is and might not approve a discount of 30% on the submarines to Israel. Better to close the deal now, before it’s too late, they say.

This argument does not satisfy the critics. The German discount is fictitious, they claim; instead, they say, the Germans upped the price and then gave a discount on the higher amount. Not long ago, that same German shipyard sold four similar submarines to Egypt at a much lower price. No one in Israel did the necessary preparatory work; no one conducted the kind of negotiations that are necessary for a transaction of such magnitude. There are other, more experienced shipyards in the world that produce the kind of submarines that Israel needs. To the final price, the Germans added their investment in research and development (R&D), but no one checked if this R&D hadn’t been carried out in any previous transaction it signed with other countries. The additional characteristics that are supposed to be added to the new submarines belong to the specialized fields of other shipyards, mainly in France, and common sense would dictate that additional price quotes be obtained from French shipyards as well (before deciding from whom to buy). Instead, someone was in a very big rush to complete this transaction and threw away Israeli taxpayer money with a very ready hand — so say the critics.

The submarine deal has the Israeli military system up in arms in recent weeks; it is one of the hottest issues in unofficial conversations. The assessment among security experts is that the IDF itself did not push the deal and that the army heads do not feel there is a need for six expensive submarines, which will carry enormous price tags of upkeep, maintenance and equipment — price tags that will only rise over the years. In December 2015, it was reported that a high-level IDF officer, who presented to journalists the multi-year program of the army, said the IDF planned to surrender one of its submarines with the arrival of the sixth submarine in 2019. According to this officer, today a candidate for the position of air force commander, Israel can make do with only five submarines.

Now, less than a year later, it emerges that the IDF will not concede even one submarine and that it plans to spend huge sums to acquire three additional submarines. Netanyahu has succeeded in imposing his will on the entire defense system with relative ease. In previous years, the heads of the different military arms did not hesitate to criticize Netanyahu and oppose his views. But this time the military, headed by Chief of Staff Lt. Gen. Gadi Eizenkot, closed ranks with Netanyahu and executed his orders, almost without asking questions.