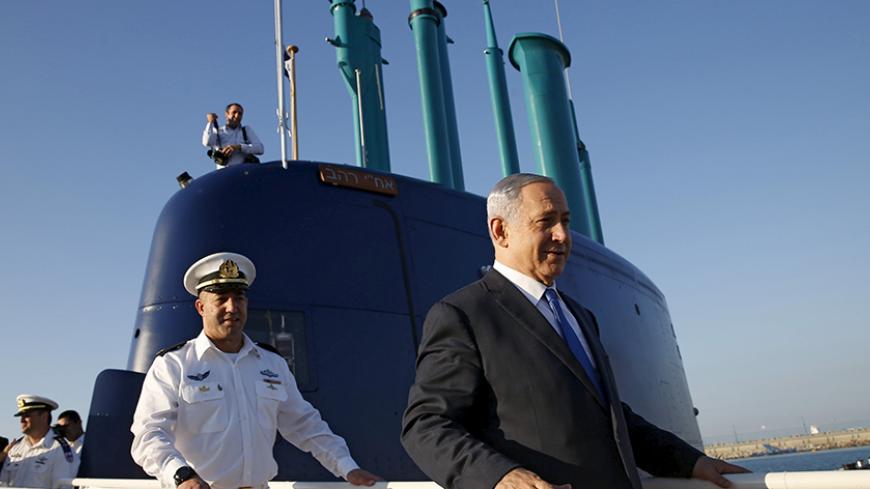 Israeli Prime Minister Benjamin Netanyahu (R) walks on the Rahav, the fifth submarine in the fleet, after it arrived in Haifa port, Jan. 12, 2016. - REUTERS/Baz Ratner

On Jan. 12, President Reuven Rivlin, Prime Minister Benjamin Netanyahu and Defense Minister Moshe Ya’alon stood on the dock of Israel’s naval base in Haifa, looking eagerly to sea. They watched as a slick dark mass glided silently into the harbor. It was the INS Rahav, one of the most sophisticated, ultra-modern submarines in the world, arriving directly from the port of Kiel in Germany. In what other country would the highest tier of political leaders participate in the celebratory reception of a new submarine? Only in Israel, apparently. In their impassioned speeches at the event, the three men competed to be the one to use the most impressive superlatives when describing Israel's power, capacity for deterrence and ability to strike at enemies with unprecedented force far from the country’s borders.

The three top leaders had good reason to participate in the launching ceremony for this new submarine, the fifth of its class in the Israeli fleet. According to foreign publications, this submarine, like the others, has the capacity to carry and launch long-range cruise missiles armed with nuclear warheads. Foreign intelligence services estimate that the country’s fleet of submarines of this class, six in total by 2019, constitutes “Israel’s life insurance policy.” That should deter any foreign power toying with the idea of launching any kind of weapons of mass destruction against the Jewish state.

According to regularly published Western intelligence reports, Israel’s modern submarine fleet provides an extensive capacity to “strike back” in the event that the country comes under nuclear attack. Israel’s lethal response could sow destruction on many Iranian cities, even destroying some.

Sources in the West also estimate that the large number of Israeli submarines makes it possible for the country to keep at least two at sea at any given moment. While out, they are immune from harm and ready for any potential scenario and order.

Reportedly, this fleet is disproportionately larger than that of any other country of the same size. As of now, the fleet is valued at 2.5 billion euros ($2.72 billion, half a billion euros per sub) and bears a vast array of operational, maintenance and logistical expenses. What sets the balance in its favor are the existential threats faced by the Jewish state, including the Iranian nuclear threat and the need for significant comprehensive deterrence in the heart of a Middle East in flames.

The timing of the newest submarine’s arrival was perfect. Its appearance at its new home port coincided with the lifting of suffocating and paralyzing international sanctions on Israel’s biggest adversary, Iran. According to assessments by Israeli sources, the Iranians will soon be signing a huge arms deal with Russia in an effort to upgrade and refurbish the Iranian military's conventional capabilities, which have aged and worn down over the past few years.

The Israeli press reported this week that the Iranians plan to devote over $20 billion to the acquisition of Russian-made weapons systems, fighter jets, tanks and anti-tank missiles. The implementation of the nuclear agreement between Iran and the world powers may remove the Iranian nuclear issue from the agenda for the next decade, but it also replaces it with a regional conventional arms race, which will now accelerate. Inevitably, that race will focus on Israel versus Iran, with the active participation of the Sunni states, which are keeping a worried eye on everything happening around them. Concerned states include Saudi Arabia, Egypt, the Gulf States and maybe even Jordan.

But there is also a minority opinion in Israel that argues that the political and defense establishment, led by Netanyahu, will do everything it can to revive the “Iranian threat” and ensure that it remains at the top of the agenda. Netanyahu flourishes when Israel is surrounded by threats like Iran. The fact that the Iranian nuclear threat has dropped off the international and Israeli agendas should work to his detriment, especially in a country where the civil agenda always plays second fiddle to existential questions. Many defense experts say that this is why Israel is now trying to replace the Iranian nuclear threat with the threat of conventional weapons from Iran, which continues to arm Hezbollah and is operating multiple terrorist fronts against Israel in various places around the world.

Israel’s new Dolphin-class submarine was built according to the particular specifications and needs of the Israeli Navy. It is 10 meters (33 feet) longer than similar submarines, so as to accommodate a sophisticated gas cell system run by an integrated diesel-electric engine that does not need to draw oxygen above water. The system enables submarines of this class to spend much more time submersed off hostile shores. It is in fact believed that Israel uses its submarine fleet to gather intelligence and conduct operations very far from Israel, right off enemy coastlines. The submarines can maneuver in absolute secrecy, leaving a minimal signature. They are in fact quite close to nuclear submarines. All that they are missing is the nuclear reactor.

A vocal public and professional debate in the press and the defense establishment has accompanied Israel’s massive acquisition of submarines. The person behind the decision to purchase the navy’s sixth submarine (slated to arrive in 2019) is former Defense Minister Ehud Barak. He initiated the process, despite the opposition of then Chief of Staff Gabi Ashkenazi and Commander of the Navy Eliezer Merom. Other former chiefs of staff and senior officers also objected, but Barak overcame this opposition and had the purchase approved by the Cabinet. The IDF preferred to invest the billions of dollars that the submarine cost in other weapons systems, but Israel’s efforts to oppose the Iranian nuclear project were at their high point in the years that the decision was made (2011-2012), and the political leadership was already investing vast sums in that. It seems as though the desire to emphasize and ensure Israel’s capabilities for deterrence against nuclear threats is what finally shifted the balance in favor of purchasing the sixth submarine.

There was a surprising turning point a few weeks ago, when the current chief of staff, Lt. Gen. Gadi Eizenkot, decided to retire the oldest submarine of this class as soon as the sixth one arrives three years from now. Israel will make do with five Dolphin submarines. This decision signifies a very prominent shift in Israel’s defense priorities, one that will keep the General Staff and other top defense officials busy well into the future.