While the Knesset debates opening an inquiry into the purchase of German submarines under the Netanyahu government, Defense Minister Benny Gantz has announced a new deal with ThyssenKrupp for the purchase of three more such vessels. 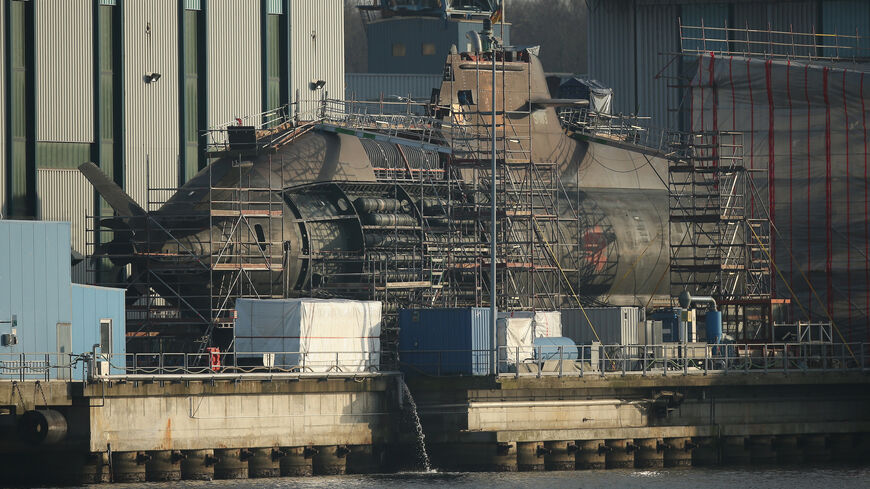 A military submarine is under construction in dry dock at the ThyssenKrupp Marine Systems GmbH shipyard in Kiel, Germany, Jan. 18, 2016. - Sean Gallup/Getty Images

Israel reached an agreement today to purchase three submarines from German ship builder ThyssenKrupp. The megadeal will see the first upgraded diesel-electric submarine out of the three purchased constructed and delivered to the Israeli navy within nine years. The purchase agreement was inked at the Defense Ministry's Tel Aviv headquarters by director Amir Eshel and by ThyssenKrupp CEO Rolf Wirtz, in the presence of Israeli naval commander David Salama.

Reports say the three submarines would cost more than double their original price, for a total of 3 billion euros ($3.4 billion). The German government will fund 540 million euros in the deal, with a special grant via an agreement signed between the two countries back in 2017. Israeli politicians criticized the rise in price, which was apparently not reported ahead of the signing to the government nor to the Knesset. Still, experts explained that the rise in price reflects the change of product, with Israel now purchasing much more advanced models.

A parallel industrial strategic cooperation agreement signed between Israel’s Economy and Industry Ministry and ThyssenKrupp calls for reciprocal purchases by the German company and by its subsidiaries and suppliers of Israeli products, mainly security equipment, worth over 850 million euros, to be purchased over a period of 20 years.

The new submarines will form a new class called Dakar, in honor of the Israeli submarine that mysteriously disappeared in 1968 en route from the United Kingdom to Israel with 69 crew members on board. These new vessels are essentially an upgraded version of the Dolphin-class diesel-electric model (also purchased from ThyssenKrupp) that the Israeli navy has been using these past few years. The new contract also includes the construction of a training simulator in Israel and the supply of spare parts.

"Israel’s defense system gets stronger and better equipped. This morning we completed the purchase of three world-class operational submarines. This procurement joins a series of steps that I have been privileged to promote in the past year, equipping and strengthening the IDF with the purchase of helicopter squadrons, fighter jets, refueling planes and other armaments. We are preparing for operational readiness in the face of challenges on all the arenas," tweeted Defense Minister Benny Gantz.

Gantz thanked the German government for its assistance in advancing the deal and for its standing commitment to Israel's security, adding, "I am sure that the new submarines will upgrade the capabilities of the navy and will help maintain Israel's security superiority in the area."

Gantz' series of steps probably refers, among other things, to a deal concluded Dec. 31 between Israel and the United States for the purchase of a dozen heavy transport helicopters, two (additional) refueling planes, advanced aerial munitions, air defense systems, new naval and land-based platforms and cyber and digital systems. Israel also plans to purchase from the United States in the near future additional F-35 fighter jets.

After Gantz' statement, Prime Minister Naftali Bennett said that the signing of the submarine deal means significantly reinforcing Israel’s national security and that it will ensure Israel continuity and strategic superiority for years to come. He noted that the government he is heading has and continues to operate on all matters of security purchases in utmost honesty. He thanked former German Chancellor Angela Merkel and newly elected Chancellor Olaf Scholz for their efforts in bringing the deal to conclusion after a long delay.

The new deal takes place on the backdrop of growing calls in Israel for an official inquiry over past purchases of three submarines and of missile boats for the protection of Israeli marine natural gas platforms. These two deals are at the heart of a legal process, with former senior Israeli security officials and associates of former Prime Minister Benjamin Netanyahu accused of taking bribery in order to advance the purchase. Netanyahu himself has not been charged in this affair.

Gantz and Foreign Minister Yair Lapid announced last week they intend to bring an official inquiry commission for government approval. But it was reportedly delayed over the government’s negotiations to sign the new submarine agreement. In past deals, the German government included a clause enabling it to back away from its engagements should proof of corruption surface.