Israel Must Invest to Deter Iran

Alon Ben David writes that investing in preparing a military option against a potential Iranian nuclear weapon is not an "adventurous fantasy." 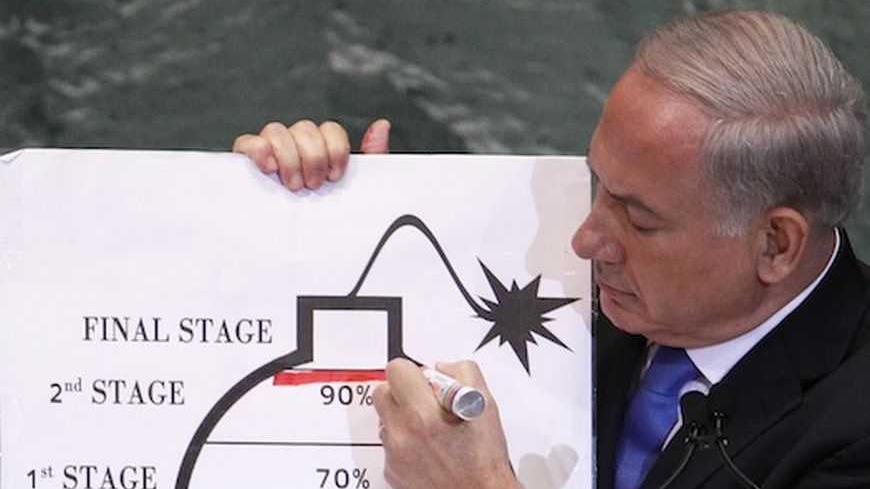 It’s a safe bet that investing in building military capabilities vis-à-vis Iran will continue in the next government, regardless of its composition. Against the backdrop of the immense NIS 39 billion [US$8 billion] deficit revealed several weeks ago in the 2012 budget, ex-Prime Minister Ehud Olmert accused Prime Minister Benjamin Netanyahu of needlessly spending NIS 11 billion [US$3 billion] of the budget on "adventurous fantasies." But it would be hard to imagine an Israeli prime minister who wouldn't have invested in preparing a military option to stop Iran's nuclear program. Even if this contingency never materializes, the ability to use it as a threat could prove a sound investment in the long run.

Even the “new” Netanyahu — the one who, in his victory/concession speech on the night of the elections suddenly revealed that the “quest for peace” was a basic tenet of his government — still places the struggle against Iran as the top challenge facing his future government. Anyone who has met Netanyahu in recent years gets the impression that he views his life’s mission — the destiny thrust upon him by history — as stopping Tehran’s nuclear program. This mission, which was completely absent from the election campaign, will reappear on the agenda once the government line-up is completed.

In his September speech at the UN, Netanyahu marked his famous red line regarding Iran: production of 250 kilos of 20% enriched uranium. At the rate of current production, and assuming that the fissile material is not once again being diverted for other uses, the Iranians are poised to cross this threshold in March or April at the latest. US President Barack Obama will try to begin a direct dialogue with the Iranians, an effort expected to last at least until a new Iranian president is elected in June. If a surprising breakthrough doesn't occur, Netanyahu will again face the question: to attack or not to attack?

In the fall of 2010, Netanyahu broached the idea of an attack on Iran as a practical plan. The heads of the defense system stopped him, and, Defense Minister Ehud Barak later claimed, the Israeli Defense Forces (IDF) hadn't prepared the necessary capabilities. Since then, the cabinet has repeatedly approved special budgets for the development of capabilities against Iran — an investment that totaled about NIS 11 billion [US$3 billion], as Olmert revealed. “This is an expenditure on moves that were not made and will not be made," the former prime minister claimed, accusing Netanyahu of “adventurous fantasies.”

Part of this immense sum went towards known projects, like the purchase of a sixth submarine from Germany, and part for secret projects — “black boxes” which appeared in the budget without elaboration, not as part of the defense budget. Olmert chose to attack Netanyahu for buying the sixth submarine over the army’s recommendation to the contrary. (The truth is that the IDF did not object to the purchase of this submarine, but pointed to other systems as more urgent.)

It's strange that Olmert chose to attack Netanyahu on this issue. Olmert himself, as prime minister, ratified a decision by his predecessor, Ariel Sharon, to buy two submarines from Germany, despite the sharp objection of Dan Halutz, who was then chief of staff. Olmert knows that Israel bought all six submarines without the army’s approval, and mostly against the objection of the chief of staff and commander of the navy. According to foreign reports, the Dolphin subs can carry nuclear missiles and are designed to provide Israel with a second-strike capability in the event of an attack on Israel. They do not serve an Israeli attack scenario; rather, they are designed to serve as a deterrent against anyone threatening Israel with a nuclear strike. In other words, one must invest money to create credible deterrence.

The cost of the sixth submarine purchased from Germany was NIS 2.5 billion [US$0.7 billion], and together with its two sister subs, currently under construction, they will eventually replace the three submarines operating today, which were bought at the end of the previous century. As for the rest of the budget allocated for preparing for confrontation with Iran, one cannot elaborate. We can assume that some of the budget was directed toward improving Israel’s intelligence capabilities vis-à-vis Iran and some toward developing systems to enable Israel to withstand a confrontation at such distances. But like most systems developed by the IDF, they provide generic capabilities not limited to one scenario, and they will contribute to Israel’s strength in any future confrontation.

The sum is indeed immense, and it undoubtedly constitutes part of the heavy deficit left by the outgoing Netanyahu government. But can Israel afford not to build a military capability vis-à-vis Iran, if only to create credible deterrence? It’s hard to imagine any prime minister taking such a risk and not building a capability for coping with Iran in the future.

By the way, this is not the first time that Israel has spent considerable sums on threats that did not materialize. In 2003, during the second Gulf War, Israel invested NIS 3 billion [US$0.8 billion] in preparing to defend against then-Iraqi President Saddam Hussein’s chemical and biological weapons, the existence of which had not been proven at the time.

Along with special additions to the defense budget, Netanyahu imposed a NIS 3 billion [US$0.8 billion] cut in response to the 2011 social protests. His government veered away from the course set by the Brodet Commission for the defense budget and, for the first time in many years, in 2012 the IDF operated without a multi-year plan. Planning exists, but nobody in the IDF knows which budget to base plans on. In an organization like the IDF, the inability to plan projects and to embark on long-term contracts is unbearable.

The “Oz” plan prepared by Chief of Staff Benny Gantz for the coming five years tries to adapt the army to changes in the region, but in a conservative, risk-free fashion. With the disappearance of a conventional military threat against Israel, the next defense minister will be able to reduce the size of the land forces and direct resources to the war tools of the future — cyber, intelligence, precise munitions and unmanned aircraft. Indeed, no regular army is poised on Israel’s border threatening war, but the instability around us brings violent and radical elements closer to Israel’s borders and increases the chances of more frequent cycles of escalation.

The IDF will be hard-pressed to fulfill these tasks if the defense budget is cut once again — and this is a likely scenario — but it will have to change its priorities and invest wisely to meet future threats, not those that are gradually dissipating.