Israel Defense Budget Can Be Cut

Idan Grinbaum calls for a serious public debate and major cuts in the Israel defense budget. 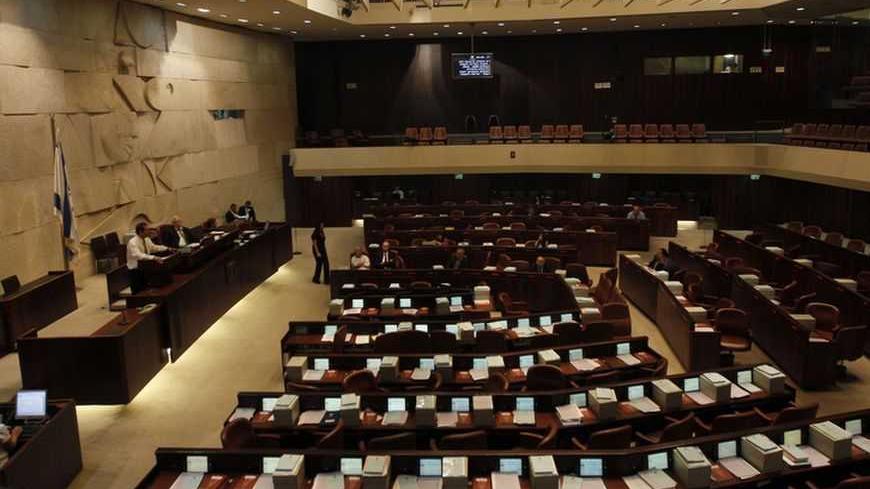 A general view of the Knesset, the Israeli parliament, during a session boycotted by the opposition parties in Jerusalem, June 17, 2009. - REUTERS/Ammar Awad

The political and economic systems in Israel were all riled up last month because of two, seemingly unrelated, events. The first to make headlines was the well-covered dispute between former Prime Minister Ehud Olmert and current Prime Minister Benjamin Netanyahu over the tremendous expenditures of the Israeli defense establishment to prepare itself for a military conflict with Iran and the threat posed by the Iranian nuclear program.

The second event that caused an uproar was the publication of Israel’s 2012 national deficit, which reached a record high of NIS 39 billion [around $10 billion] — far exceeding the forecasts and estimates (to be precise: NIS 18.5 billion [$5 billion] over the forecast).

The first task the new government will be charged with — regardless of its composition – will be the approval of the 2013 national budget. Because of the aforementioned deficit generated in 2012, the budget will include painful cuts, and one of them, this time, is supposed to be in defense. Without scaling back the defense budget, it is difficult to see how the overall budget can be passed. This time, as opposed to the past, the potential players in the future government include many who believe that the time for such a step is long overdue — regardless of whether there is an Iranian threat. If this actually does happen, it will mark the first time since the Rabin government in the 1990s that the defense budget will be put on the table for serious discussion and have to absorb major cutbacks. “Serious discussion” and “major cutbacks” are the two very things recent Israeli governments have refrained from doing.

If we discuss the two issues mentioned at the beginning in depth, we will be able to understand how Israeli governments have historically acted specifically to economic and defense matters, but also in general when it comes to setting strategy and defining long-term objectives.

Former Prime Minister Ehud Olmert pointed the finger at his successor, Netanyahu, for allowing his government to spend approximately NIS 11 billion [around $3 billion] over two years on preparations for a conflict with Iran, including “€500 million [about $678 million] on a submarine that was purchased against the advice of the Israel navy commander.” These figures were real news to the Israeli public, since they had never been presented or discussed publicly. What’s more, even the fact that the defense budget soared in 2012 from NIS 52 billion [$14 billion] to a record NIS 60 billion [$16 billion] garnered almost no attention. Any attempt, however minor, at a serious discussion on the size of the defense budget and the ability of the Israeli economy to support it, given ever-growing social needs, was pushed aside by the defense establishment, which rushed to announce the list of existential threats looming over Israel.

Even the sharp increase in the budget deficit, which was basically a fait accompli months and months ago, did not get the public discussion it deserved. It did not provoke the anger of the Knesset [Israeli Parliament], the Finance Committee (the parliamentary committee that oversees the national budget in terms of revenues and expenses) did not call emergency meetings and so, one fine day we all woke up to the surprising news of the gargantuan deficit. Here too, as was the case with defense, any attempt at serious discussion was thwarted by the minister of finance and the people in his ministry, who were quick to calm the waters by saying that the “situation was under control” and that they were taking the necessary measures. It was tough then — as it is today, to find a politician who is willing to look the public straight in the eye and say that taxes need to be raised right away or that a series of major cuts has to be made.

The lack of serious public debate does not begin and end with these two issues. It is true for many other matters as well. This was the case, for example, the day after the Carmel fire, in which 44 people lost their lives and a wide array of shortcomings and failures came to light as a result. This was also the case with the Israeli healthcare system, which is only discussed when the wards are unbearably overcrowded or when the doctors and nurses wage an uncompromising fight for their salaries.

Israeli governments have historically always preferred putting out fires and pulling the budget blanket (which is generally too short to cover everything) over the issue that is in the limelight at the given moment. When nobody conducts in-depth strategic discussion of the military threats and budgets required to address them, we discover one morning that the prime minister decided to buy a submarine with an astronomical price tag. When no agency objectively and as a matter-of-fact examines the forecast for tax revenues against the changing reality, we suddenly discover how the deficit virtually spirals out of control. And when nobody examines the budget basket in full, we wake up one fine day to discover that the government has committed to huge expenditures with a variety of organizations, but now must cut billions from its budget.

In most cases, it is hard to blame the ministers of the various ministries for lack of planning and lack of a clear strategy, mainly because of the short time they serve in their positions (the outgoing Netanyahu government, which served four years, is exceptional in that regard). Thus, for example, since 2000, 12 ministers have served in the Ministry of Energy and Water, eight ministers in the Ministry of Transport, and eight ministers were even at the helm of the Ministry of Finance, which is considered relatively stable. So, when each minister comes with their own plans and targets, and throws out those of their predecessors, it difficult for ministries to look beyond the immediate, to plan and prepare.

To the credit of the last government, we can say that it understood the problematic nature of not having a well-defined strategy. After issuing a tender about 18 months ago, it selected the international RAND Corp., which together with the Israeli consulting firm, Shaldor, is supposed to delineate a strategy for Israel for the next 15 years. Now, all we can do is wait for the document to be prepared, and then wait to see what the next government actually does with it.

Idan Grinbaum is a senior economy editor and a leading financial correspondent with a vast experience in the Israeli media arena. Today he is the editor and presenter of a daily TV financial magazine, Sogrim Heshbon ("Closing the Deal" in Hebrew). He was one of the three founding members of Calcalist. a daily financial newspaper. He was the chief economy editor of Channel 10 TV news, and Editor in Chief for Economics at Y-net, which is the leading Israeli news website, part of the Yedioth Ahronot media group. Idan holds a master's degree in political communication from Tel Aviv University and graduated with Distinction. He lives in Tel Aviv with his wife and three children.