Israeli Middle Class Only Dreams of the Good Life

Idan Grinbaum analyzes who exactly makes up Israel's middle class and what economic challenges they face. 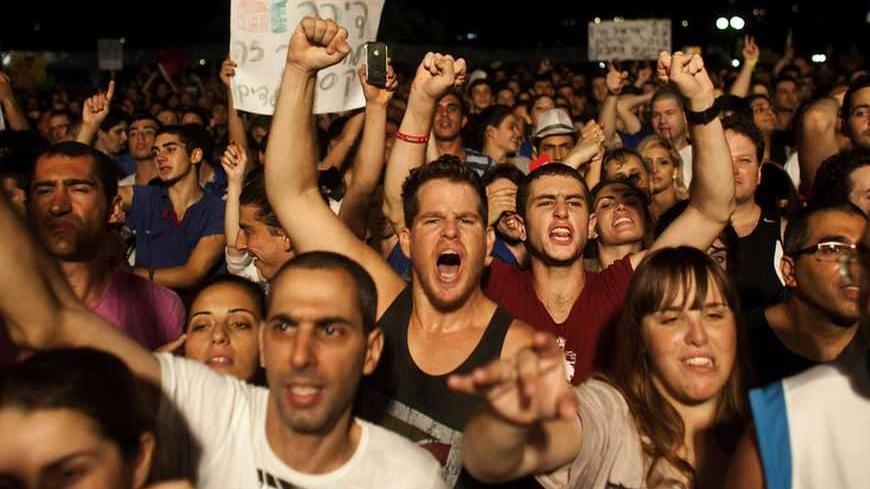 What does an average Israeli family (two parents, both working, two children, a mortgage and a dog) with a monthly income amounting to NIS 9,600 ($2,500 per month) have in common with a similar family whose monthly income is as high as NIS  26,000 (on the order of $6,800)? Anyone even slightly familiar with the cost of living in Israel would say straight away that in terms of their standard of living, the two families are far removed — the one living from hand to mouth, while the other is living in relative comfort — and that they thus have nothing in common

However, judging by the wonders of statistics, there is actually no difference between these two families. Both are categorized as “middle-class” Israeli families. It is that same socio-economic class on whose behalf tens of thousands took to the streets in the summer of 2011, calling for social justice, and it is that same class in whose name a whole array of candidates ran in the recent parliamentary elections. One of the contenders, Yesh Atid leader Yair Lapid, running under the banner of “strengthening the middle class,” has even managed to attain a record achievement, garnering 19 mandates, which render his party the second largest in Israel.

According to a recent study by the social research institute Adva, in the last two decades the Israeli middle class shrank by 3.0%, dropping from its share of 30.8% of all households to a mere 27.8%. One may wonder where its members have disappeared. It emerges that the more successful among them moved up the ladder and joined the upper class, whose share among all households in Israel increased from 36.5% to 37.8%. The weaker, as may be expected, moved down the class ladder, becoming a part of the lower class, whose share among all households increased from 32.6% to 34.4%.

So, how is a typical middle-class Israeli living? His monthly income we have already discussed. Now, let’s see how he is spending his money. According to the Central Bureau of Statistics, the “heaviest” expenditure of the average Israeli family is on housing. About a quarter of a household's income is used to pay mortgage installments or rent. Coupled with related expenses, such as municipal taxes and maintenance fees, the expenditure on housing amounts to some NIS 4,500 [$1,200] — out of a [median] monthly income [in 2010] of about NIS 13,000 per family.

The second major item of expenditure is communication and transportation expenses — amounting to more than NIS 2,000 [$535] a month per family. Food accounts for the next item on the list of a household’s expenditures — amounting to about NIS 1,700 [$455] a month (NIS 300 [$80] of which go to buy bread and another NIS 350 [$94] of which are spent on meat. Israelis are not commonly keen on fish and spend only NIS 76 [$20] on the average on this food article).

By way of illustration, it may be noted that the expenditure on food in the lowest tenth stands at only NIS 850 [$228] a month per family, as against NIS 3,000 [$804] a month per family in the top echelon. The average Israeli family that carefully calculates its steps and expenditures is left at the end of the month with more or less NIS 1,000 [$268], which it can save or use to help the older children, for instance.

Considering the above, it may well be understood what motivated the young Israelis who flooded the streets in the summer of 2011 under the slogan “The people demands social justice.” By the way, contrary to common belief, the “tent revolution” involved not only the young. Many of the older generation, who were experiencing with anxiety their fall down the class ladder, joined the social justice protest movement.

According to the study by Adva Center mentioned above, the Israeli middle class has, in fact, become a class of laborers. Almost half of the middle-class in Israel (the upper middle class and even more so, the lower middle class) consists of industrial and construction workers or sales and service personnel. Many others are employed in the various segments of the public sector. The share in the middle class of workers in the advanced industries — those that are considered the “locomotive of the Israeli economy” — has become virtually negligible (less than 5% of middle-class Israelis are employed in the high technology sector). This may explain to some extent the growth in the Israeli upper class.

So, next time you meet an Israeli who grumbles about the poor economic condition of the middle class, take it in proportion. Suppose he tells you that he works for a chip manufacturer and that his wife is a lawyer and that, nevertheless, they cannot make ends meet and cannot afford to provide their three children with everything they would have liked to give them. Well. let's face it, even with all the empathy in the world, you would find it hard to feel sorry for him, as quite likely, that Israeli is no longer a part of the middle class and has long since joined the upper class, and there may be some consolation in it.

Those who grew up on the “American dream” or, to put it more precisely, on the American dream portrayed by Hollywood, would associate the term “middle class” with a type of “comfortable bourgeois life” — a nice house in the suburbs of one of the major cities, two cars in the garage, a green yard, a dog and a peaceful neighborhood offering a wealth of options. Alas, this rosy “Hollywoodian” American dream is inapplicable to the reality in Israel.

Those Israelis who have realized the Israeli bourgeois dream belong to the upper class — by any parameter. The soaring house prices in the major cities, as well as in the neighboring satellite towns, the rising cost of living and the frequent price hikes in various spheres of the market have driven many middle-class Israelis out of the game. The sweet, comfortable life is something that they can therefore only dream of.

Idan Grinbaum is a senior economy editor and a leading financial correspondent with a vast experience in the Israeli media arena. Today he is the editor and presenter of a daily TV financial magazine, Sogrim Heshbon ("Closing the Deal" in Hebrew). He was one of the three founding members of Calcalist. a daily financial newspaper. He was the chief economy editor of Channel 10 TV news, and Editor in Chief for Economics at Y-net, which is the leading Israeli news website, part of the Yedioth Ahronot media group. Idan holds a master's degree in political communication from Tel Aviv University and graduated with Distinction. He lives in Tel Aviv with his wife and three children.