Cutting already-low child benefits in Israel under the pretext of equal sharing of the economic burden is liable to cause irreparable damage, warns Idan Grinbaum. 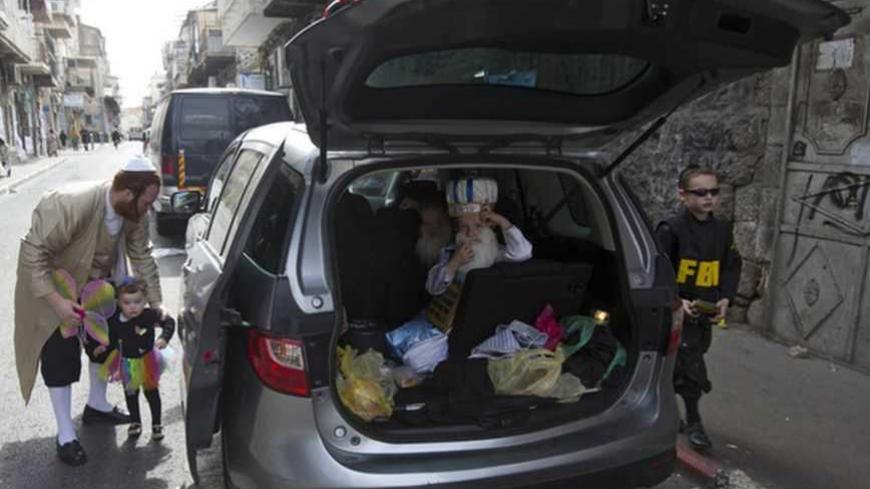 Children wearing costumes for the Jewish holiday of Purim wait to get out of a car in Jerusalem's Mea Shearim neighborhood, Feb. 25, 2013. - REUTERS/Ronen Zvulun

Seven billion shekels [nearly $1.9 billion] — that’s a figure you should bear in mind. This is the sum expended by the State of Israel in 2012 on child benefits granted to over one million families or a total of some 2.5 million children (according to updated data released by the National Insurance Institute of Israel, the number of families who received child benefits in 2011 was 1,048,000). Had the Treasury had its way, child benefits would have been slashed by at least half. As a matter of fact, this is precisely what the Finance Ministry officials have already rushed to recommend in the framework of the plan for deep budget cuts awaiting submission to the next government.

In the Finance Ministry they have it all laid out. They argue that the allowance per child should be the same for each child in the family, no matter what the number of children. And this, contrary to the situation prevailing since the coalition agreements of 2009, according to which the allowance per child increases up to the fourth child and then decreases to some extent and remains constant for all the other children in a family. In this article we will try to explain why any cut in child benefits, even the slightest cut, is liable to be destructive; and apropos, we will attempt to shatter some myths concerning the concept of child benefits.

As noted, the discourse on child benefits in Israel is tainted by populism. It is accompanied by a concurrent discourse that, for lack of a more appropriate description, may be characterized as racist and which is typical of countries that are coping with mass immigration.

The above said, harsh as it may sound, is observed with reference to the frequently heard arguments as if child benefits were a treasure coveted by the ultra-Orthodox community in Israel, as well as by the Arab public (two sectors where birth rates are markedly high).

However, the figures point to an utterly different reality. It transpires that 82% of Israeli families receiving child benefits have one to three children, and the percentage rises to close to 90% of Israeli families when those with four children are also accounted for by the statistics. At the same time, less than 9% of the families in Israel receive an allowance for the fifth and sixth children. In other words, the number of large families is rather limited, and given the significant decline in birth rates among ultra-Orthodox and Bedouin women over the years, it may be further stated that child benefits by no means “encourage” people to have more children.

What’s more, it is clear that the total allowance of 1900 shekels [$512.6] per month granted to families with six children cannot cover the expenses involved in raising them, let alone allow these families to live comfortably off the allowance.

All those calling for massive cuts in child benefits in Israel should bear in mind the statistics. As of 2011, 40.1% of Israeli children aged 0 to 17 have been at risk of poverty (according to the Central Bureau of Statistics report entitled Society in Israel). By way of illustration, it should be noted that this figure is the highest among the OECD member countries (next in line is Spain, with a poverty risk rate among children of only 26.2%) and much higher than the average in the OECD countries, which stands at 19.9%. In the absence of attractive alternatives in the labor market, at least in the short term, or of other benefits, you may just imagine the dramatic impact the cut in benefits is liable to have in terms of the poverty rate and the poverty risk rate among children in Israel, which would, in all probability, escalate still further.

Be it unemployment benefits or maternity grant — in Israel you get less. According to data released by the National Insurance Institute of Israel (under the heading Social Security Systems in International Perspective: Israel and the OECD countries. 2011), in terms of the allowance in euros for the first child, Israel is ranked at the bottom of the OECD list, far below countries like France (where there is no allowance for the first child, but where the allowances granted for the second child and up in a family are three times more than the corresponding allowances granted in Israel), Austria, Ireland, Germany and others. Compared with Britain, Israel scores a point with respect to the fourth-child allowance, which stands at 90 euros in Tel Aviv versus a mere 67 euros in London. Another interesting figure concerns the percentage of the gross domestic product (GDP) per capita allocated in Europe to the allowance for the second child in a family, as against the corresponding percentage in Israel. In this case, too, the picture emerging is far from flattering to the Israeli economy. While the average second-child allowance in the OECD countries constitutes 4.3% of the GDP [per capita], the analogous figure in Israel is only 2.4%. On top of the OECD list on this index are countries like Germany (with 7.0% of the GDP allocated to second-child benefits), Hungary (5.7%) and France (4.9%), while at the bottom of the list are countries like Greece and Spain, which are both in deep economic crisis, with 1.6% and 1.7% of the GDP [per capita], respectively.

However, Israel was not always at the bottom of the list of child benefit rates. In fact, at the beginning of the last decade, under pressure by the ultra-Orthodox parties, the situation with regard to child benefits was quite different. The peak was reached in 2001, when a rare coalition lineup — forged through the collaboration of ultra-Orthodox and Arab Knesset [Israeli parliament] members, joined by their colleagues from the then-ruling Labor party and the Likud, which was in the opposition at the time — managed to pass the so-called “Halpert Bill” (named after its initiator, then-Knesset Member Shmuel Halpert of the ultra-Orthodox Agudat Yisrael party).

Under the enacted bill, the allowance for the fifth child and up in a family was raised to the exorbitant sum of 855 shekels [$230] per month, while the associated maternity grant was simultaneously boosted.

At the same time, the allowance for the first child in a family remained at 171 shekels [just over $46] alone. This inequitable distribution of public resources drawn from the state’s coffers, the cost of which amounted to 600 million shekels [close to $162 million] annually, was revoked at the height of the economic crisis in Israel in 2003, when the government in power was one of the very few in Israeli history set up without the ultra-Orthodox parties.

It may thus be suggested, and quite rightly so, that the seeds giving rise to populist statements of the kind listed above were sown in those years and that it was then that large parts of the Israeli public came to believe that certain populations were exploiting child benefits as a source of livelihood rather than going out to work and earning an honorable living. Be that as it may, as noted above, reality in Israel has radically changed since.

On the bottom line, it may be noted that underlying the populist discourse and the generalized and quite often offensive statements, the hard facts are that child benefits in Israel are among the lowest in the Western world, whereas they are virtually indispensable in view of the expectancy of poverty among children in Israel. Any attempt to recommend cuts in child benefits, citing equal sharing of the economic burden as a pretext, is liable to cause irreparable damage to a large population of children, whose sole crime is having been born to families without sufficient means.

Idan Grinbaum is a senior economy editor and a leading financial correspondent with a vast experience in the Israeli media arena. Today he is the editor and presenter of a daily TV financial magazine named "Sogrim Heshbon" ('Closing the Deal' in Hebrew).