The ultra-Orthodox population in Israel is considered poor by economic measurements, but its members do not feel poor in part due to their consumption habits and solidarity networks. 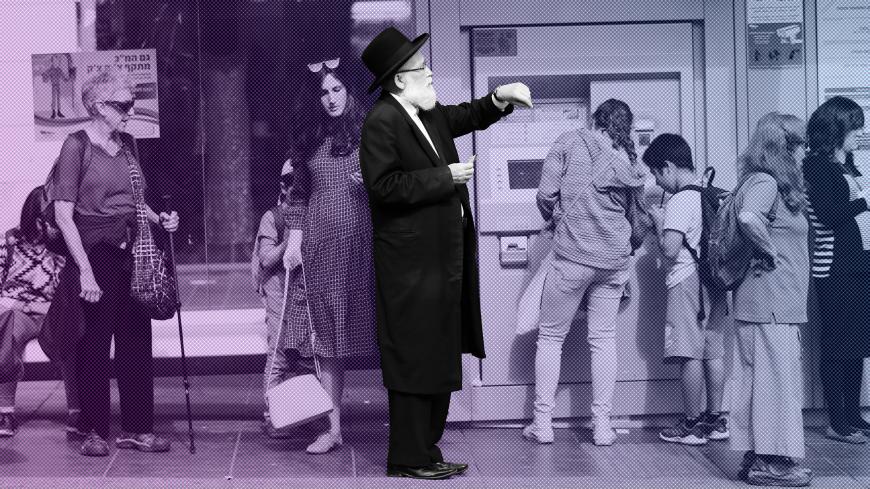 An ultra-Orthodox Jewish man checks his watch while waiting for a light rail train in Jerusalem, Oct. 18, 2018. - REUTERS/Ammar Awad

The data is well known and alarming. More than half of the ultra-Orthodox community in Israel lives below the poverty line.

Nitsa (Kaliner) Kasir, a former senior researcher at the Bank of Israel who produced the new report, told Al-Monitor that there are several factors behind this paradox. The most apparent factor is that the true poverty rate in the ultra-Orthodox sector ranges between 8% and 14%, a figure revealed by measurements of consumption habits related to the particular lifestyle of the ultra-Orthodox. There are certain products, services and activities for which ultra-Orthodox society has no use, for example, cinemas and rock concerts. There are also other products and services — for instance, transportation and communications — that the ultra-Orthodox use differently from other Israelis.

According to Kasir, because of the character of the ultra-Orthodox community, it forms an almost entirely closed economic market that enables those who live in it to provide for their needs despite their low income. One of the measurements for Kasir’s report examined the income level of ultra-Orthodox families compared to average income within the ultra-Orthodox sector rather than compared to Israelis in general.

A major factor in the ability of ultra-Orthodox families to provide for themselves is their consumer behavior, which differs significantly from that typical of Western society. For example, the ultra-Orthodox reuse non-perishable products, such as clothes, which are passed down among children in the family. They make purchases according to actual need, and their spending on luxuries is very low.

Expenses for media, such as cell phones, internet and computers, is much lower among the ultra-Orthodox compared to non-Orthodox Jews. According to various estimates, only one-third of ultra-Orthodox adults have a cell phone, only some of which are smartphones, because of restrictions and safeguards within the community related to internet use. Television is practically non-existent in the ultra-Orthodox sector.

Another indicator involves vehicle ownership. Among the ultra-Orthodox, the ownership rate per 1,000 people is only 85, compared to 345 among non-ultra-Orthodox Jews.

The relatively closed ultra-Orthodox community maintains an especially high degree of community support, which includes high levels of volunteerism and donations, mutual aid, care for the needy and a variety of frameworks for economic support. The system of donations and loans in the community includes various charity associations, which are community banks of a sort that do not charge interest or fees and in effect prop up the economy of ultra-Orthodox households.

The data on satisfaction can also in part be explained by the ultra-Orthodox community's religious way of life, which does not cherish money or economic status. Instead, its members live in the spirit of a saying from the Jewish textual tradition: “Who is rich? He who is happy in his lot” (Mishna, Pirkei Avot 4).

The low income of the ultra-Orthodox sector, even if not a cause of poverty in the classic sense, is considered as much by international measures. Among the nations of the Organisation for Economic Co-operation and Development, Israel, along with the United States, has the highest rate of poverty among its citizens. Nearly 18% of Israel's population is considered poor.

As a result of the low participation rate of ultra-Orthodox men in the workforce — although the rate has risen in recent years, from 35% to more than 50% — the state levies less in taxes from the ultra-Orthodox sector than from others, but spends much more in benefits to it. This situation has led to negative feelings among the general population toward the ultra-Orthodox. The general public views them as people who do not carry their share of the economic burden, do not pay taxes and are a drain on the state’s finances because of the benefits they receive.

In the last decade, however, there has been a growing phenomenon of the “new ultra-Orthodox,” who are increasingly integrating into the broader Israeli society. In doing so, they are adopting a slightly more open lifestyle, including changing their consumption habits, which in turn is altering the ultra-Orthodox economy. The ultra-Orthodox leadership is trying with all its might to maintain the fences separating the community. To this end, it has convinced the government to increase stipends for yeshiva students, a move that might continue to limit the number of those who work, but the gates have already been opened.

A more progressive element in the ultra-Orthodox sector is now growing. It maintains the stringent rules of kashrut and religious customs, but at the same time is more independent due to its greater capacity to provide for itself economically. Thus the members of this sector will not necessarily accept dictates of rabbis on matters that are not religious.