As more ultra-Orthodox seek higher education, universities are struggling with whether to offer segregated courses and programs, which would undermine educational principles and devalue female academics. 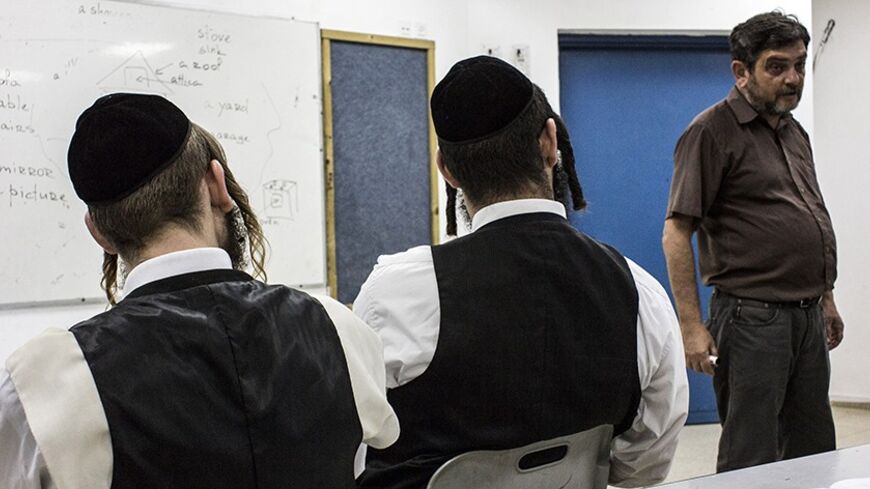 Issues of religion, state and multiculturalism raise significant questions about values and politics everywhere. In Israel’s splintered society, these questions often arouse strong polemics between the various sectors and their representatives. Take the following example: Politicians, academics and social activists — whether ultra-Orthodox, religious or secular — may agree that ultra-Orthodox Jews should be encouraged to enter the work force. They may even agree that the best way to achieve this goal is through higher education. However, they do not agree on the social price that must be paid to realize this goal. There is even less agreement on who, exactly, should pay that price.

According to data from the Bank of Israel, about 44.5% of ultra-Orthodox men are part of the work force today (compared with about 78% of the non-ultra-Orthodox population). Most are employed in lower-paid positions, which perpetuates the poverty of their population and increases their burden on society at large.

On March 13, the Knesset passed the draft law to regulate Israel Defense Forces recruitment in the ultra-Orthodox sector. One of the law’s articles enables thousands of ultra-Orthodox men aged 22 and older who have not yet served in the army to leave their rabbinical colleges and enter the work force. Until now, they have needed to remain in the religious studies framework until age 27 to avoid military service. But according to the bank, the chances that these young men will improve their socioeconomic status through higher education are slim, despite new opportunities for employment.

The Council for Higher Education (CHE) reported to the Knesset in February 2014 that many ultra-Orthodox men would like to study in the coming academic year. However, it seems that most will not do so, because they refuse to study in institutions where men and women sit together in classrooms.

For more than a decade now, universities and colleges in Israel have offered various programs aimed at solving this problem. Tel Aviv University, Bar-Ilan University and the University of Haifa sponsor such projects and offer academic degrees to students of ultra-Orthodox colleges, which practice gender segregation. The students work from the campuses of those colleges, removed from the regular university faculty and students. In recent years, however, these universities have also offered such programs on their own campuses. The Israel Technology Institute and several universities opened college-preparatory study programs for men only, to which only male lecturers are assigned.

“Some of the ultra-Orthodox students will agree to continue on for their degrees in the regular mixed classrooms after a year of preparation in the college-preparatory program,” explains Orna Kupferman, the vice rector of the Hebrew University, charged with integrating ultra-Orthodox students. “Others can study in mixed settings on the condition that they have a spiritual support framework that helps them maintain their lifestyle, something that the Hebrew University offers them. True, the programs are not necessarily compatible with liberal values such as gender equality, but that is a price we are willing to pay to live in a multicultural society and enable the ultra-Orthodox to integrate into the labor market and society,” she said.

However, the college-preparatory programs and support frameworks are not enough for the more devout and strict ultra-Orthodox. Thus, the CHE, responsible for authorizing academic programs, suggested that special degree tracks be established for that sector. The council issued a statement that read: “Gender-segregation arrangements will be recommended only [not compulsory] … and the institution will take disciplinary steps against anyone who applies pressure to impose gender segregation.” Nevertheless, it seems that one of the key demands of ultra-Orthodox candidates for higher study is the enforcement of gender segregation in the classrooms. Among other things, this demand dictates that female lecturers will not teach male students, while male lecturers will be allowed to teach women.

Bar-Ilan University, a modern Orthodox university, is already planning degree programs with full gender segregation. “We are not interested in changing the ultra-Orthodox because if we change them, they will not be themselves,” said the university’s rector, Haim Teitelbaum, at the same Knesset session.

There is also an economic incentive providing substantial impetus to the universities that are financially strangled and crying out for additional sources of income. The Hebrew University spokesperson's office verified to Al-Monitor March 19, “The Planning and Budgeting Committee (operating out of the CHE) grants sizable budgets for the ultra-Orthodox students.” However, when the Hebrew University administration presented its plans for separate tracks for ultra-Orthodox students in the medical and education schools, many faculty members raised the cry, “Not in our school.” More than 300 of them signed a protest petition, and similar demonstrations took place in other universities.

“Enough is enough,” announced Kupferman. “Such gender separation crudely contradicts all the principles that the university is supposed to represent.” The vehement opposition stems from concern for the ideological foundations of higher education, for the status of female lecturers and for ramifications of such accommodations on the relations between the ultra-Orthodox and the secular population — and between church and state in general — in the State of Israel.

In a scathing article published in Haaretz, professor Menachem Mautner of Tel Aviv University said, “The main goal of university study is the attainment of knowledge … which is fueled by the basic human desire to understand what takes place in the world. The underlying assumption of the university is that all human beings, wherever they are — without regard to nationality, gender, status or race — may enrich the research process and the discourse that takes place in it.”

Yofi Tirosh, also from Tel Aviv University, added the following in the Knesset discussion, “The university must be based on liberty and equality. The moment we agree to the exclusion of women — how will subjects such as law and psychology be taught when the teaching institution contradicts the most basic humanistic values?” She added, “As it is, women [in universities] are not promoted like men. If there are to be programs for ultra-Orthodox males in which men can teach women but women cannot teach men, women’s economic value will drop and the universities will have a budgetary motive for preferring men.”

Mautner also worries that the capitulation of the secular public to the ultra-Orthodox constitutes a slippery slope.

“This is a moment of truth,” he said in an emergency assembly in Tel Aviv University June 20. “In the coming years, the ultra-Orthodox presence will increase in the state’s civil society, and that is a welcome change. But the arrangements that will be determined now will influence the nature of the civil society for many years. We must elucidate the principles on which to build cooperation with the ultra-Orthodox sector.”

Of course, this clash of values does not take place only in Israel. But, according to Noah Efron of Bar-Ilan University’s Science, Technology and Society Department, this dilemma does not usually play out on the background of long-standing culture wars. “The debate with the ultra-Orthodox is a continuation of the modernity and education discourse from the beginning of the 20th century,” Efron explained. “If the ultra-Orthodox want modernity, it is only for pragmatic reasons and without accepting the liberal values that go hand in hand with modernity. The truth is … that most of the secular public does not accept the ultra-Orthodox, and wants to turn them to be more like us.”

"D" is an ultra-Orthodox woman studying law on an ultra-Orthodox campus who asked that her identity not be revealed. “People talk loftily about human rights, but what about my rights as an ultra-Orthodox woman? I also deserve a setting that is compatible with my values and beliefs, and not only in the ultra-Orthodox framework, but anywhere I choose to study.” But Tirosh poses a difficult question: “Our readiness for multicultural pluralism must wrestle with the question, ‘What culture do we honor and respect?’”

Another expression of the controversy between the establishment and the ultra-Orthodox sector is the issue of core studies. In January 2000, the High Court of Justice ruled that government funding of ultra-Orthodox educational institutions must be conditional on the teaching of core subjects according to a curriculum to be determined by the state. Later on, the Education Ministry formulated a core group of subjects including the study of foreign languages, mathematics, science and technology; this was to be a shared foundation for all the education institutions in Israel. One of the main objectives of the core studies program is to grant any young person, regardless of the community he or she belongs to, the basic tools to integrate into higher education institutions and the labor market.

The main objections to this curriculum came mainly from the ultra-Orthodox sector, parts of which do not want the state to be involved in the content taught in their institutions. But during the last few months, we can detect a potential rapprochement between the sides. One could hope that despite the complexity of these questions, solutions will be found to this issue and to other gender and cultural issues as well, to mend the rift between the ultra-Orthodox and the rest of Israeli society.