More and more Israeli ultra-Orthodox women turn to computer programming, accounting, entrepreneurship and other jobs instead of traditional positions in the education system. 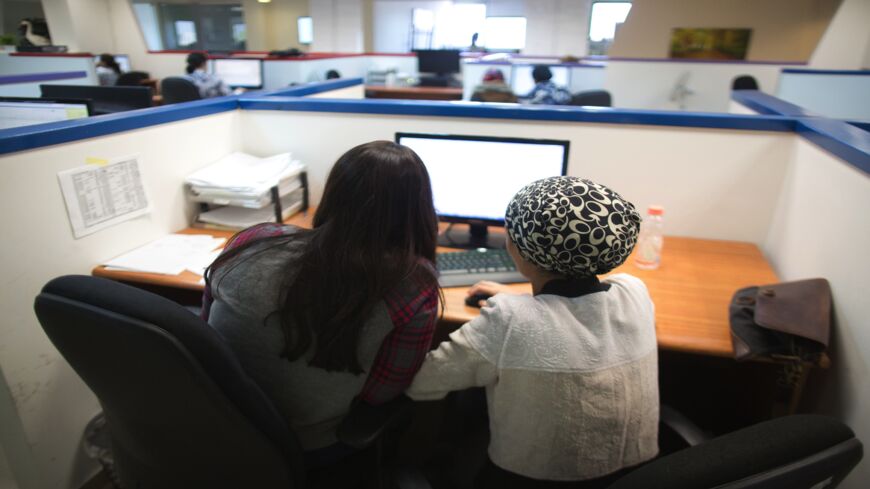 Ultra-Orthodox Jewish women work on computers at their desks at the Comax software office in the central city of Holon near Tel Aviv on April 17, 2016. - MENAHEM KAHANA/AFP via Getty Images

The rate of employment among ultra-Orthodox Jewish women reached an all-time record in the final quarter of 2021, catching up with the rate among non-Orthodox Israeli women at 83%, according to Israel’s Central Bureau of Statistics. These are impressive numbers given that the government-set target for 2020 was only 63% and that employment among another highly conservative Israeli minority, Arab women, has seen slight improvement but is generally stagnant at 40.5%.

The trumpeted achievement notwithstanding, we wish to spoil the party a bit.

Second, even if an increasing number of women go to work, their average pay is not high, to put it mildly.

Third, and actually most important, the government was not responsible for this growth; if anything, its policies had a negative effect. Finance Minister Avigdor Liberman, for example, instituted cuts in government daycare subsidies for families unless both parents work at least part time, potentially forcing many women to stay home to care for their children.

The increased employment rate is actually attributed to the ultra-Orthodox leadership, which generally places a heavy burden on the women of their community. Ultra-Orthodox women are expected to marry and find work immediately in order to support their husbands’ religious studies and provide a living for the children they are expected to bear.

This world order that prevailed for decades has been corrupted in recent years and overtaken by the idea that women are supposed to work outside the home whether or not their husbands study. This policy, by the way, is typical of ultra-Orthodox communities in Israel, not in the Diaspora where men are the main breadwinners. Either way, ultra-Orthodox women have never been “imprisoned” at home. On the contrary, they were always encouraged to work despite the inherent difficulties in being sole providers and serving at the same time as mothers of families blessed with many children.

This has been true for many years. But when Benjamin Netanyahu served as finance minister, he instigated deep reforms in the state’s support for ultra-Orthodox families — reforms designed to encourage men to work rather than study full time and thereby alleviate the rampant poverty in ultra-Orthodox communities. There are those who argue that Netanyahu’s policies generated the beginning of a slow change on ultra-Orthodox men working, though other factors might have also contributed.

While Torah study has remained a paramount value in ultra-Orthodox society, synagogues now post want ads on their walls, organizations have been set up to train young Orthodox men in various workplace skills and obtain placements in the labor market, and professions and jobs that were generally off limits to men of these communities, whether due to lack of skills or discrimination, have opened up slowly.

What, then, explains the increase in ultra-Orthodox women’s high workforce participation? The pay level and job variety.

For many years, the vast majority of ultra-Orthodox women worked as teachers in their own communities, and competition for such openings were fierce. The job of a school or kindergarten teacher was considered highly desirable, resulting in widespread nepotism and favoritism.

This, in turn, caused widespread exploitation and abuse. While many schools provide worthy conditions for their women teachers, the pay of many childcare kindergarten assistants is abominably low. They work long hours; they are not entitled to vacation pay, doing menial jobs that are not expected of assistant caregivers in kindergartens of other secular communities.

Over time, ultra-Orthodox women started eyeing other potential jobs, and fields in which they traditionally did not have a foothold opened up and enabled them to flourish. A woman who 20 years ago could only hope for a teaching position can go nowadays into computer programming, accounting, wig and clothing design, and paramedical occupations such as speech language pathology and occupational therapy.

Many others who lack the necessary connections or skills for such jobs turned to entrepreneurship. They have set up clothing stores such as Kidichic, a successful designer clothes chain for ultra-Orthodox children; become importers of toys or clothing; are operating popular websites and fitness studios and gyms. Many have gone into academia, running programs for ultra-Orthodox women who study for advanced degrees, which they themselves did not have an opportunity to attend at the time.

These sea changes have had tangible results. Whereas only a decade ago, the coveted teachers’ training programs were overflowing, these days applications are sparse, prompting a shortage of kindergarten and school teachers. At the same time, positions in computer programming have become plum jobs, setting the bar high in terms of acceptance into such training and jobs. These positions are generally well paying at levels that teachers, once considered to have the best jobs in these communities, could only dream of.

A senior executive at a high-tech firm that employs many Haredi workers explained to Al-Monitor (speaking on condition of anonymity) that “the high-tech industry discovered ultra-Orthodox workers, and the ultra-Orthodox discovered us. This is a discovery for both sides, they are still getting to know each other, but it is shaping up as a love story.”

Over time, however, ultra-Orthodox entrepreneurs also got into the game, establishing software and high-tech companies, some of which exploit the fact that their ultra-Orthodox women workers have limited choice. They can only work for companies willing to cater to their special needs, such as segregated women-only workspaces, frequent pregnancy leaves, absence from work for childcare needs and relative proximity to home. Some are offered only 50% of the pay of a non-ultra-Orthodox woman doing the same job.

However, changes are emerging in this field too, given the high demand for skilled workers. As one high-tech executive put it semi-jokingly, graduates of the elite 8200 military intelligence unit cannot fill all the needs of the rapidly growing Israeli high-tech industry. An increasing number of high-tech firms are thus eyeing ultra-Orthodox employees, both men and women, offering improved conditions and even willing to institute what for them are far-reaching changes in the work environment and conditions to accommodate them.

A recent writeup in the popular ultra-Orthodox weekly Hamishpaha (Hebrew for “The Family”) quoted Idan Tendler, vice president of Palo Alto Networks, urging members of the ultra-Orthodox sector to join his firm, which is considered a global leader in the field of cybersecurity. “We see that the ultra-Orthodox workers are highly motivated, disciplined, energetic and committed,” Tendler was quoted as saying. He explained that ultra-Orthodox employees are “fast learners and especially open-minded and creative, fundamental qualities highly valued in the high-tech industry, and especially in our innovation-based firm.”

The company is willing to go to great lengths to accommodate ultra-Orthodox staff, even complying with unusual requests such as installing dedicated software to filter out inappropriate content from the computers of ultra-Orthodox employees and provide women-only work spaces. “We need skilled, capable workers and the demand is high,” Tendler told the magazine. “So that if you have workers with a head on their shoulders and a willingness to study and invest, they will go far in our company.”