Starving for experienced workers, Israeli authorities and high-tech companies are investing in training young Palestinians and young people from the Israeli-Arab sector and the ultra-Orthodox community. 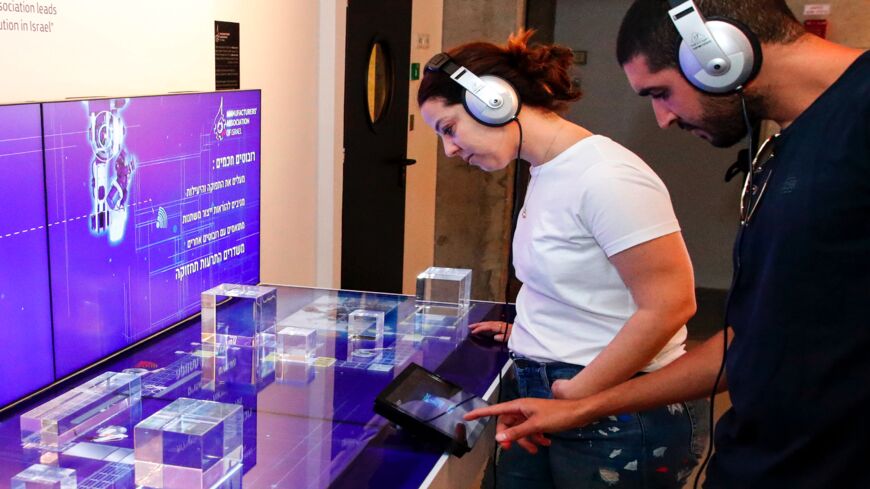 Visitors interact with a display by the Manufacturer's Association of Israel at the Israeli Expo technology exhibit at the Peres Center for Peace and Innovation in the Israeli coastal city of Tel Aviv on Sept. 3, 2019. - JACK GUEZ/AFP via Getty Images

Foreign Minister Yair Lapid is a great advocate of Israel’s high-tech industry. His goal is for 1 million nationals to be employed by this sector in the near future. He believes this can be achieved within the next three to five years. Lapid often argues that the high-tech industry could fund other parts of the Israeli economy as well, since high-tech offices need security services, restaurants, etc.

"We have only one place to go: a million high-tech Israelis. When we invest in traditional industries, the market that we're aiming for is 9 million people. When we're investing in the high-tech market, we're aiming for 7 billion consumers. That's the difference. One million Israelis in high tech is an achievable number. Already today, 10 to 11% of the [Israeli] labor market is in high tech. We need to double that number," Lapid said on Feb. 13.

Nevertheless, despite the dizzying success of Israel’s high-tech industry, it is not all a bed of roses. A survey conducted by the Manufacturers Association and Deloitte found that there was actually an excess of “junior” employees in high tech. Most of the unfilled positions are limited to people with at least three years of experience. This caused the Manufacturers Association to announce at last month’s Eilat Conference for Industry and High-Tech 2022 that it was launching a new program to train some 5,000 new employees within three years, as well as plans to promote minorities, i.e., Palestinians and the ultra-Orthodox, in the high-tech industry. The idea is to train people with little high-tech experience to the level required in the industry.

Marian Cohen, CEO of the Israeli High-Tech Association, a branch of the Manufacturers Association, told the same conference, “The program offers an urgently needed solution to the staffing problem in high tech if we want the industry to continue to lead the Israeli economy forward.” Chair of the Forum of Cyber-Technology Companies at the Manufacturing Association Lior Frankel threw his support behind Cohen’s remarks, adding, “If we don’t build a manpower training system in the field, based on a broad education and training in technology, we will not be about to maintain continued growth.”

In fact, given the shortage of experienced employees in the high-tech industry, coupled with a desire to take advantage of the possibility of employing Palestinians in Israel, last November, the government approved increasing the quota of entry permits to include another 500 skilled workers from the West Bank. These would be absorbed in stages by Israeli high-tech firms over the next three years as part of an overall effort to deal with staffing shortages in the industry.

Based on the new schedule, 200 Palestinians will join Israeli high-tech firms in 2022, with another 200 in 2023 and another 100 in 2024, the program’s final year. These Palestinians will be provided with entrance permits to work in high tech without infringing on the total number of work permits for Palestinians.

Furthermore, it was determined that remuneration for Palestinian employees in the high-tech industry will be no less than 150% of the average wage in Israel. Israeli high-tech workers generally earn much more than the average wage in the country. Still, this minimum remuneration for Palestinians would be much higher than what they would earn in the West Bank.

Commenting on the government decision, Minister for Regional Cooperation Issawi Frej declared, “Israelis and Palestinians live in a common space, so it is incumbent upon us to boost cooperation between civilians and the two economies. We are confident that the move will increase the yield from higher education in the Palestinian Authority and strengthen high-tech industry as a significant engine of growth, thereby strengthening the Palestinian economy.”

There is still one disturbing figure from the survey conducted by the Manufacturers Association and Deloitte: Israeli Arabs and Israeli ultra-Orthodox together still make up less than 5% of the manpower working in the field. While this could be further evidence of the depth of the overall staffing problem, it could also offer a solution. The government should take further steps to better integrate Arabs and the ultra-Orthodox in high-tech training — for instance, by further exposing and encouraging high school students in these sectors to envisage a future in high tech.

Several measures for encouraging Israeli Arabs and Israeli ultra-Orthodox to seek high-tech education have already been put in place in recent years, with some results already visible. According to a recently released report by the National Council for the Economy, the number of Arab students in first-year programs for a degree in tech fields was 16%, while the number of ultra-Orthodox was 3%. Focusing on the Arab sector alone, there can be no doubt that this is an impressive improvement compared to previous years. According to figures provided by the Council for Higher Education, there has been a tech revolution in the Arab sector. In 2018, for instance, Arab students made up 12% of all students in high-tech fields, a marked increase from just 8% in 2012. So there is definitively a trend of increase.

That is exactly where Israeli high-tech firms are beginning to focus their attention. The deputy manager of Ness and director of inspections and automation at the company, Omer Dror, told Al-Monitor, “Here at Ness, we are combining the training of junior employees from the ultra-Orthodox, Arab and general sectors. Upon completion of their training, they are integrated into large teams in which every new employee receives mentorship from veteran employees in the field. In order to contend with companies overseas that offer ‘low-priced solutions,’ we believe that it is possible to combine an attractive Israeli cost with the creation of an added value professionally. There is no doubt that from a strategic perspective too, companies that do not integrate and assist in the advancement of junior employees from every sector will miss out on a huge opportunity, on a business and a national scale.”