With a manpower shortage that keeps growing, Israeli high-tech companies are going to great lengths to recruit a quality workforce. 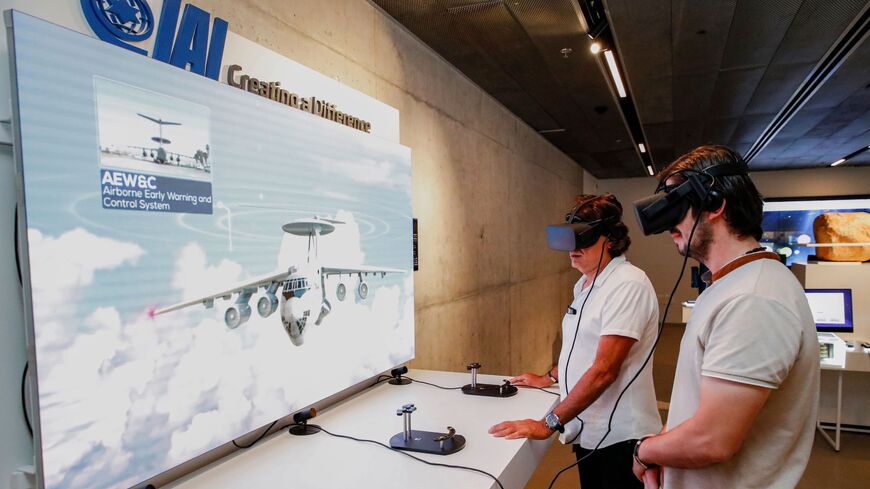 Visitors wearing virtual reality headsets interact with a display by the Israel Aerospace Industries at a technology exhibit at the Peres Center for Peace and Innovation in the Israeli coastal city of Tel Aviv on September 3, 2019. The center serves in part as a shrine to Israel's long list of high-tech accomplishments. - JACK GUEZ/AFP via Getty Images

The provocative ad campaign to recruit staff for Israel Aerospace Industries (IAI) testifies, more than anything, to the shortage of engineers and other high-tech workers in Israel’s advanced industries. The IAI is an old, respected company owned by the government. As such, the recent campaign evoked intense discussions and even something of an uproar on social media.

According to Ethosia, a placement firm specializing in high-tech, Israeli high-tech industries raised an unprecedented $25.6 billion last year, some 140% greater than it raised in 2020. The companies’ public offerings and sales soared to $82.5 in 2021, five times greater than the sales and public offerings of Israeli companies in 2020. This growth demands more and more manpower. A market survey conducted by Ethosia determined that the industry, with its 360,000 employees, still has over 20,000 more positions to fill in important fields such as engineering and development.

Where will it find them? Though there are several possible solutions, none of them are simple. Ethosia CEO Eyal Solomon suggests focusing on recruiting new immigrants and refugees who fled Ukraine as a result of the war with Russia.

Ukraine is home to 220,000 programmers. According to the Israel Manufacturers Association, some 10,000 of them are already distance employees of Israeli high-tech company. According to the Israel Innovation Authority, 41% of Israel’s high-tech outsourced workers are from Ukraine. Since the start of the Russian invasion, an estimated 30,000 Ukrainian citizens have fled to Israel, with many more arriving every day. Many of them are highly educated individuals looking to make a life for themselves in Israel as new immigrants.

In fact, Israel approved at the end of March fast-tracking immigration for refugee tech workers. The so-called "green track" applies to both Ukrainian and Russian refugees, whether or not they are entitled to enter Israel under the Law of Return for people of Jewish origins.

Al-Monitor has written about the potential offered by programmers and other high-tech employees from Morocco. This is, at least, what the Moroccan government is trying to convince Israeli high-tech companies in its efforts to get them to outsource work to high-tech centers in Casablanca and Rabat.

During a visit to Israel, Chakib Alj, president of the General Confederation of Moroccan Industries, told us that Morocco has plenty of engineers who graduated from Moroccan universities and even some who graduated from European — and especially French — universities. The problem they face is that local high-tech industry is still too small to offer them all employment opportunities. The possibility of having Israeli firms hire them seems like an excellent solution for both parties.

Another possible solution is appealing to those populations in Israeli who are not involved enough in the field, including residents of the periphery, Arabs and the ultra-Orthodox. The problem is that during a discussion about this in the Knesset’s Economics Committee, it was discovered that government investments in such programs were not very effective. An old program by the Innovation Authority invested over 600 million shekels in subsidies to five firms, with the intention of them increasing the number of people they employ in the periphery. They ended up employing just 180 people.

The chairman of the committee, Knesset member Michael Biton (Blue and White party), said at the Knesset debate, “We are talking about 3.5 million shekels per employee. This figure should resonate with us. It demands a government investigation into how something like that could have happened. It is a very serious problem that cannot be overlooked.” Biton then called to establish an inter-ministerial round table to promote the development of high-tech industry in the periphery. He then noted that the committee would have another discussion on the issue in the coming months.

While there is some progress in the ultra-Orthodox world, it is also slow. The ultra-Orthodox community does not learn core subjects like math and English at a high enough level in their yeshivas, so they need to make up the subject matter in order to get into courses for high-tech careers.

Also, the ultra-Orthodox lifestyle has people marrying and having children at a younger age than the average in Israel. Thus, a poll conducted by Askaria on the subject suggests obstacles that secular Israelis are not necessarily confronted with at the same age. Many of the young ultra-Orthodox men simply cannot afford the studies. The majority (59%) of these young men need to work while studying to support their families. Furthermore, some 83% of ultra-Orthodox women prefer that their studies and employment be segregated by gender, but this is not always possible.

Progress in the Arab sector seems to be quicker, largely because of former Prime Minister Benjamin Netanyahu’s five-year plan for the sector in 2016. This pushed thousands of young Arab men and women into academia, especially into fields related to high tech.

Minister of Innovation and Science Orit Farkash Hacohen set employment goals for high tech that included a significant increase in the number of employees who are, as of now, from underrepresented sectors in the field. These include women, Arabs and the ultra-Orthodox.

According to the targets set by the minister, some 45% of new employees in high-tech fields should be women by the end of 2023. Furthermore, high tech should absorb another 4,500 employees from the Arab sector in those two years and at least 2,800 employees from the ultra-Orthodox community. As of now, there are only 7,500 Israeli Arabs employed in high tech (2%) and 10,500 employees (3%) from the ultra-Orthodox sector, according to a report prepared by TASC Consulting for the Innovation Authority.

Despite all this, it looks like the shortage of employees in high-tech industries will be filled in the long term. A study by the National Council for the Economy in the Prime Minister’s Office determined that there is enough potential for high-tech workers in Israel by 2030. It estimates that the number of students pursuing high-tech careers will increase by 40-125% more than the number of students today. This should meet all of Israel’s needs.