How Iraqi Kurdistan plans to reform education to fight extremism

The Kurdistan Regional Government aims to reform the religious curriculum, but some claim that these efforts will fail because extremists still have influence on the reform process. 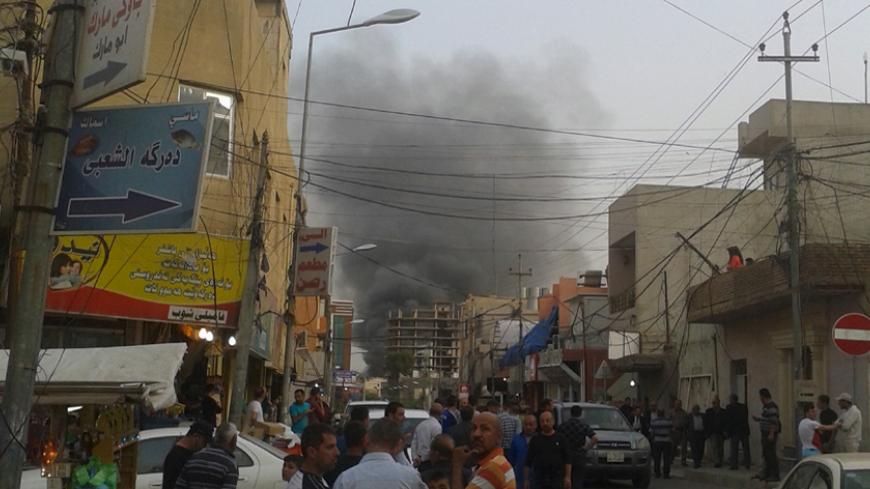 Smoke rises from the site of a bomb attack in Erbil, the capital of Iraq's Kurdistan region, April 17, 2015. Education specialists and researchers believe religious schools in Iraqi Kurdistan have a role in producing extremists. - REUTERS/Stringer

ERBIL, Iraq — On Sept. 22 and 23, the Dwryan Organization held its second conference in Sulaimaniyah with the participation of researchers and specialists in the field of education. The conference focused on the need to reform the curriculum on two levels. The first is by replacing the curriculum with a more balanced, civil one. The second is by changing purely religious texts to ones that are closer to the spirit of the age, focusing on peaceful coexistence with nonviolent societal components, in addition to closing some religious schools and replacing them with more moderate schools.

Several changes have been made to the previous religious curriculum. But researcher Bahman Tahir, who teaches elementary school through high school, said that the commission tasked to change the curriculum consisted of seven men and no women, which was reflected in the curriculum’s masculine discourse. He added, "If the former approach had a violent jihadi character, the new approach has a large deficiency toward women, in addition to a lot of intellectual and educational deficiencies that make the curriculum far from the spirit of the times and incompatible with applied sciences."

These reformist attempts are occurring amid a conflict between the traditional Islamist religious trend and the secular civil trend, which is fighting to change the curriculum entirely and replace it with comparative studies of religions. On that, Al-Monitor asked Tahir about the types of problems in the current curriculum. He said, "First, there is no harmony between the educational materials. For example, in the subjects of religion and geography, there is a disagreement on why it rains. Second, religious education aims to build a sectarian religious identity for the students and calls non-Muslims apostates.” He concluded, “In effect, this approach helped create Islamic extremism and religious violence in Kurdistan."

Naqshbandi confirmed that religious schools have a role in producing extremists in Kurdistan. He said, "Most Kurds who joined [the Islamic State] had attended religious schools affiliated with the Islamic movements in one form or another, which is why they were closed." He did not contend that the 100 remaining schools are not producing extremists.

Shirko Kermanj is a professor at Kuala Lumpur University in Malaysia and specializes in religious education curricula in Iraqi Kurdistan. In a phone call with Al-Monitor, he said, "The serious problem is that the religious curriculum did not focus on child rearing, but the Islamization of the student. This is not the role of a school within an educational system, but a religious institution." Tahir agreed, saying that the religious curriculum in the province is "geared toward the Islamization of the students and makes them pro-Muslim Brotherhood.”

In a call with Al-Monitor, Haiman Aziz, of the history department at Koya University in Iraqi Kurdistan, said "some teachers hold extremist ideas." Amid these concerns about the curriculum, the government of the Kurdistan region is at a loss about what to do. Religious extremists have infiltrated the educational religious institutions, and there is a lack of a sound educational strategy to produce a balanced educational institution that serves the peaceful coexistence of the Kurdish community.

Al-Monitor asked Jawad Faqih, a member of the Supreme Committee for the Curricula of Islamic Studies at the Ministry of Higher Education and Scientific Research, about what is happening at the ministry. He said, "The committee has made radical changes to the curricula of logic, research methodology, psychology and sociology in the college of religious science and created a balance between religious and secular sciences." But according to an official at the Ministry of Religious Endowments who spoke on condition of anonymity, these efforts "will not be useful because on the one hand there are materials that already exist and will remain as they are and on the other hand many teachers are either extremists or Islamists and they are the ones choosing the materials. The university does not interfere with the quality of their choices, and this constitutes a real danger to the mentality of our students and on how to end extremist ideology."

In order to get out of this dark tunnel, Kermanj said, the system could move away "from Islamic education to the study of religions in a comparative approach by introducing our children to world religions and not promoting a specific religion." This was seconded by Murad Hakim, a sociology professor at Salahuddin University, who said that it is necessary to introduce into the curriculum the study of religions and the history of religions in general. The curriculum needs several changes. For example, why are children in elementary school studying Islamic dawa (proselytizing) and why are they studying how to perform the prayer for the dead and the prayer of the lunar eclipse?