While few deny the need to reform Jordan's education system, the issue of combating extremism in the school curricula is dividing the kingdom. 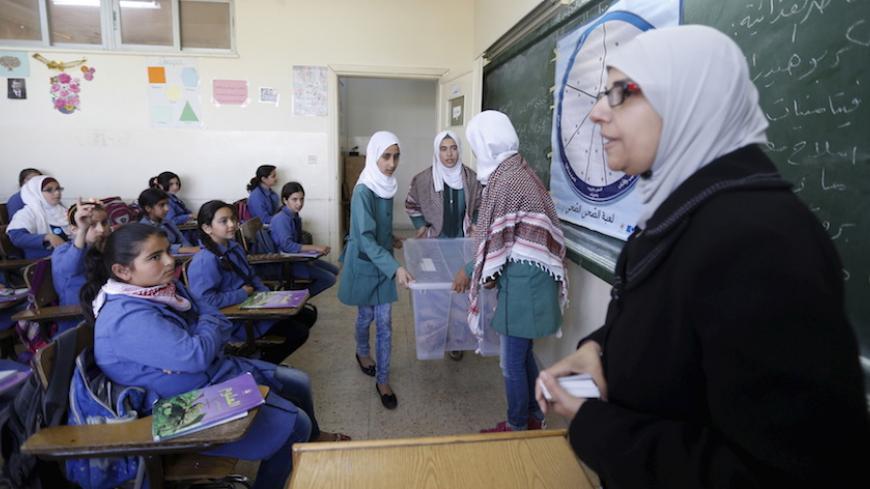 A teacher distributes meals to students as part of a World Food Program-run project to provide healthy meals to students and raise awareness of good eating habits, at Hofa Al-Mazar school in the city of Irbid, Jordan, April 26, 2016. - REUTERS/Muhammad Hamed

A religious and political dispute continues to brew in Jordan over a controversial move by the Ministry of Education to revamp the curricula of the three elementary grades. According to Deputy Prime Minister Jawad Anani, the changes are part of the government's strategy to combat extremism in society.

Changes to school textbooks introduced this year involve coverage of Islam, history, Arabic and civics. For example, in civics, reference is made to acknowledge Christians as a demographic component of the population with pictures of churches as well as mosques. In religion, entire verses from the Quran and sayings by the Prophet Muhammad have been removed, while in Arabic literature, a picture of a veiled woman was replaced with one showing an unveiled woman. In Arabic-language textbooks for the third grade, a Quranic verse was replaced by a text on swimming. No changes were made to books on the sciences, mathematics and art.

The issue of extremism in the school curricula and the reforms proposed are dividing the country. Conservatives, including the Muslim Brotherhood’s Islamic Action Front (IAF), which contested the Sept. 20 Lower House elections, have denounced the move “as an affront to our heritage and values aimed at distancing future generations from its religion, its Arab identity, its history and traditions.” An IAF spokesman urged the government to cancel “negative alterations and focus on genuine scientific developments introduced by Jordanian academics.”

The uproar has drawn in various sectors of society. On Sept. 18, the Jordan Medical Association, whose council is almost entirely controlled by the Muslim Brotherhood, issued a statement cautioning the government about “tampering with curricula that affect the society’s Arab and Muslim values.” It also said, “We warn the government of those who have [a] hidden, outside agenda against the country.”

Education Minister Mohammad Thuneibat has defended the changes. He told the daily al-Ghad on Aug. 18, “Reforming school curricula and books is the result of a joint effort by specialized teachers and academics, including university professors.” On Sept. 11, however, it appeared that Thuneibat might be re-evaluating the situation somewhat, requesting that the head of curricula at the ministry provide a detailed report on the alterations that had been made. The report has not been made public. In an interview with Al-Monitor, Thuneibat continued to defend the changes.

“[Those who made] rash judgments should consider that the new books aim at developing thought and analytical skills and avoid filling the heads of students with raw information,” Thuneibat said.

He also attacked critics who want to politicize the issue and misinform the public, stating, “We want to reform our education system, which has produced thousands of students who do not know how to read or write.”

According to Thuneibat, the new books, which were introduced in the public and private school systems, will instill the values of human rights and respect for women and children, pointing out that they do not contradict Islamic values. “Is religion only about growing a beard or covering a woman’s head?” he asked.

Education reform in Jordan has found a champion in Queen Rania, who on Sept. 5 delivered a scathing critique of the kingdom’s education system. She remarked that in 2015, 100,000 students entered 12th grade, but only 60,000 of them sat for the secondary certificate exam, and among those only 40% passed. She also noted that Jordan lags behind in education in comparison to other developing countries and said that education reform should be a national priority.

One critic of the present system is Thogan Obeidat, who supervised the curriculum while at the Education Council from 1991 to 1998. In a July 1 al-Ghad article, he claimed, “Daesh [Islamic State] can easily manipulate our books and curricula to influence students,” suggestive of religious references and Quranic verses creeping into subjects unrelated to religion. “Our curricula promote IS thinking at heart, and this process has been ongoing since the 1980s, facilitating political and religious extremism,” he explained.

His article elicited angry reactions, prompting the Ministry of Education to respond on July 8, emphasizing, “Curricula are based on centrism, moderation and the values of the constitution.”

Obeidat also wrote, “Arabic and history books contain many passages that have little credibility and invite ignorance.” He told Al-Monitor that his position remains firm. “Our curricula are designed by teachers who have self-serving goals,” he said. In regard to religious texts, he asserted, “There is a tendency to ignore non-Muslims in society and to denigrate women by emphasizing their obedience to men. Is that the kind of society we are building?”

The religious conservatives believe that there is an attempt underway to secularize school curricula and enforce a secular agenda. Hussein al-Rawashdeh, an Islamist, told Al-Monitor that education reform is needed and should be a comprehensive process. “What we see, however, is that superficial changes have been made in closed rooms by people we don’t know and [who] targeted religion and history books only,” he claimed.

In Rawashdeh's view, “[The changes] aim at fulfilling a secular agenda, and some have gone as far as calling for the replacement of religion books with art and philosophy.” That said, according to Rawashdeh, Jordan is not a religious state, and it has achieved a delicate balance between the state’s religion being Islam and being a “civil” state.

The government insists that it is moving to combat extremism, and that includes education reform and managing mosques. The latest row over school curricula, however, has raised fears about the broader consequences of such steps on a largely conservative society.