How dual nationality became a key controversy in Iran

The issue of dual citizenship is turning into a full-blown political football in Iran, where 35 senior officials have been barred from holding office following probes into their citizenships. 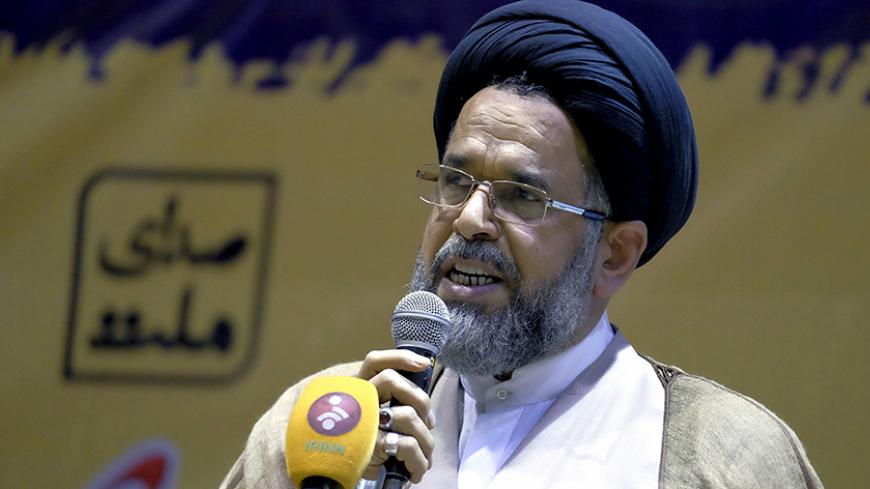 Iranian Minister of Intelligence Mahmoud Alavi, who in early October gave members of the parliamentary commission a list of people suspected of being dual nationals, speaks during a campaign gathering of candidates mainly close to the Reformist camp, in Tehran, Feb. 23, 2016. - REUTERS/Raheb Homavandi/TIMA

In Iran, the Intelligence Ministry’s barring of 35 senior officials from holding government positions has once again brought dual nationals into the spotlight. The issue was initially raised in the ninth parliament (2012-16) as a tool to pressure President Hassan Rouhani’s administration while Iran was engaged in nuclear negotiations with the six world powers. Since then, it has been pursued under what is called the “infiltration project” by parliament’s National Security and Foreign Policy Commission and the Intelligence Organization of the Islamic Revolutionary Guard Corps (IRGC).

In early October, Intelligence Minister Mahmoud Alavi gave members of the parliamentary commission the names of 79 individuals suspected of being dual nationals or holding US green cards; 35 of them were later barred from holding government positions after investigations proved that they did in fact possess such documents.

The controversy over Iranian officials holding dual nationalities began in February 2015, when a group of hard-liners and other government critics in parliament suggested that a senior official in the presidency should be dismissed for allegedly holding US permanent residency. The 13 lawmakers, most of whom were from the hard-line Steadfastness Front, warned that government jobs should not be given to individuals who pledge their oath of allegiance to the flag of foreign states, suggesting that Rouhani should dismiss the individual in question. Rouhani's office rejected the claim and said, “No official in the office of the president has dual citizenship and the issue has probably been mixed up with those that have a green card.”

Subsequently, lawmakers prepared a proposal to identify and investigate government officials with dual citizenship and green cards. The plan was ratified by the parliament’s National Security and Foreign Policy Commission in the spring of 2015 and was submitted to the ninth parliament — but was never reviewed in an open session.

However, an Oct. 4 meeting between the intelligence minister and the members of the parliamentary commission has once again highlighted the need for such a plan. Seyed Hossein Naqavi Hosseini, the parliamentary commission’s spokesman, said in this regard, “Due to existing legal vacuums, there may be more government officials who hold dual nationality but have not yet been identified by the Intelligence Ministry. The goal of such a plan is to help identify such cases.”

Based on Article 41 of the constitution, Iran does not recognize dual citizenship, and if an individual acquires the citizenship of another country, his or her Iranian nationality will be revoked. This, however, requires certain legal procedures that if not pursued will result in the individual’s foreign citizenship not being officially recognized. According to Article 989 of Iran’s civil law, such persons are prohibited from holding government positions.

In an interview with Al-Monitor, Ebrahim Asgharzadeh, a prominent Reformist political activist and former member of parliament, described senior Iranian officials holding dual nationality as something akin to indecent. According to Asgharzadeh, Reformists and Principlists generally share the same view on this issue. However, he told Al-Monitor, “The Principlists who are opposed to the administration — particularly after the recent [Feb. 26] parliamentary elections [that saw many government supporters elected] — try to blame the government and turn the issue of dual nationalities into one of [national] security.”

As Iran’s May 2017 presidential election draws near, Asgharzadeh believes this issue could be a winning card that the government needs to take advantage of. Yet, he said, “Unfortunately, the Rouhani administration is weak in this regard. There were violations in terms of dual citizenships in the government of [former President Mahmoud] Ahmadinejad that the Rouhani administration should use to make serious decisions, and not let the issue turn into a lever for pressuring the government.”

Asgharzadeh believes the hard-liners’ attitude toward the issue of dual nationals stems from a political approach that has culminated in the matter becoming security-related. He told Al-Monitor, “One of Rouhani’s slogans was to free the country from the [prevailing] security atmosphere. Unfortunately, despite his victory in the foreign policy arena, his domestic strategy for resolving this atmosphere has not been as transparent. If the judicial atmosphere is turned into one of security, the Principlists will naturally have the upper hand and can engage public opinion with issues that are not real or accurate — issues that frighten society. For instance, they can say that dual nationals are spies, have no sense of national interest and are opportunistic people.”

Another aspect of this controversy are the ordinary Iranians who hold dual nationality and end up being arrested on charges of spying and other security-related allegations — individuals such as Iranian-American journalist Jason Rezaian, Iranian-American businessman Siamak Namazi and his elderly father Bagher, Iranian-Austrian businessman Kamran Ghaderi and former US Marine Amir Hekmati.

Asgharzadeh said the citizenships of these individuals are purely legal and cannot be viewed as solely positive or negative. “It may be that their presence in foreign countries is very important in terms of cultural issues, Iran’s position and introducing our country to the international community. During the sanctions era, Iran was under a great deal of pressure, but these dual nationals directed suitable lobbies outside the country and had a great deal of impact,” he said.

According to parliamentarian Hosseini, in a joint meeting between members of the Intelligence Organization of the IRGC and the parliament’s Foreign Policy and National Security Commission in late August, it was stated that “the intelligence agencies of enemy states have a particular focus on dual nationals in the 'infiltration project' … enemy countries have focused on all government officials — especially parliament members — and may 'infiltrate' through different means such as journalists, economic activists and so on, and compromise them or their family members. Therefore, it is of utmost importance to take serious precautions.”

Hosseini also referred to the arrest of Abdol Rasul Dori Esfahani, a member of the nuclear negotiations team who was dealing with banking affairs during the talks. Dori Esfahani, a dual national, was detained in August for allegedly spying. Foreign Ministry officials as well as the Intelligence Ministry have dismissed reports of him being a spy.

Asgharzadeh told Al-Monitor he does not think dismissing officials from government posts due to being dual nationals will interfere in the administration’s work, but believes that it leaves the Principlists’ hands open in leading public opinion. He said, “I think there are no senior officials in the government who hold dual citizenship, and if there are, the administration can easily dismiss them.”

He added, “An official with a [US] green card, residency or dual citizenship is viewed negatively by public opinion. That’s why I think the Principlists can start a propaganda campaign and portray a negative image of the government. However, given the current atmosphere in the parliament, with the majority [of members of parliament] being moderates, I think it is possible to evaluate the issue within legal and judicial frameworks. The administration can also reform the laws with the help of lawyers and limit the activities of dual nationals in political and executive positions in the country.”

Yet, Asgharzadeh emphasized, “The dual nationals who are an asset to the country are the ordinary citizens, intellectuals and writers … who can be valuable and influential in the cultural and social environment of other countries.”