For years, hard-liners have claimed a large number of Rouhani administration officials held dual nationality, but a recently released parliamentary report on the matter provided no evidence to back this up. 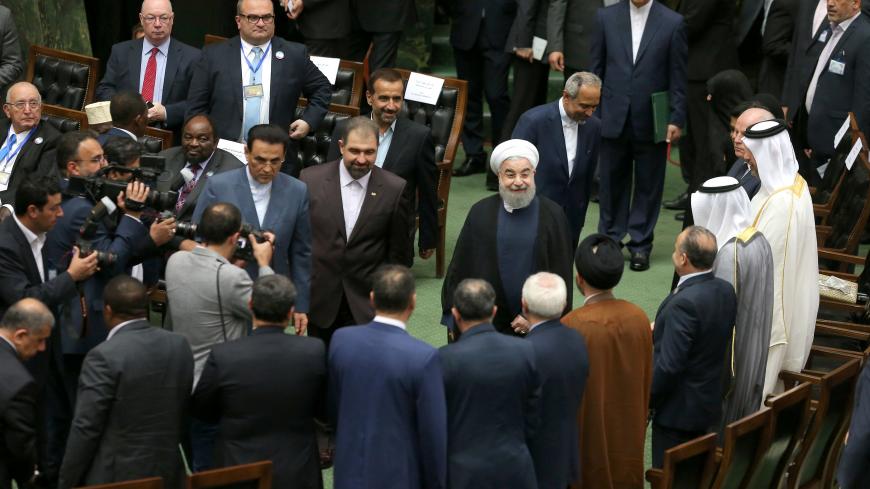 Iran’s hard-liners have long claimed that a large number of Rouhani administration officials possess dual citizenship or a US green card, and in late July, a prominent opposition member of parliament finally released a list of 71 such alleged dual nationals. However, the list was quickly dismissed by the administration as lacking evidence; this in turn raised the question of how major a seback the opposition had suffered by not backing up its claims.

Iranian hard-liners initially raised the issue of dual citizenship among Rouhani officials about four years ago during Iran’s ninth parliament. However, the dimensions of this claim were never clarified until Iran’s 10th parliament assigned an Investigation and Probe Committee comprised of 11 opposition legislators to investigate the issue. The report prepared by this committee was presented to parliament's presiding board and was read in parliament in August 2018; the report also was forwarded to the judiciary. While the report read aloud in parliament indicated that there were 13 to 17 individuals in the administration who had dual citizenship, a second, unreleased part of the report apparently contained a list that indicated that at least 210 individuals in the administration, some in high-level positions, held dual citizenship or US green cards; even Rouhani was accused of having dual British nationality.

In recent years, government opponents have repeatedly depicted dual nationals as one of the biggest threats facing the country — a threat they believe has been exacerbated by the Rouhani administration. Iranian Attorney General Mohammad Jafar Montazeri even described dual nationals as a “potential threat for the country” at one point.

Meanwhile, the administration has repeatedly rejected hard-liner attempts to portray dual nationals as a threat. In May 2018, Iran’s Intelligence Ministry released a report dismissing the claims as false. The opposition, on the other hand, has continuously argued otherwise, claiming that almost all those arrested for espionage in recent years were dual citizens, such as Iranian American Washington Post writer Jason Rezaian, British-Iranian Nazanin Zaghari Ratcliff and Canadian-Iranian Abdol Rasul Dori Esfahani, who was a member of Iran’s nuclear negotiating team.

The threat of dual nationals has been heightened by hard-liners so much that in May, the British Foreign Office warned Iranian-British dual citizens to not travel to Iran. Jeremy Hunt, who was Britain’s foreign secretary at the time, said dual nationals face an "intolerable risk of mistreatment" if they travel to Iran.

It should be noted that the names on the list accompanying the parliamentary Investigation and Probe Committee report — and the evidence used in the matter — had remained unknown until last month.

However, on July 24, a heated debate between two members of parliament took the issue to a new level. Reformist legislator Alireza Rahimi accused the opposition of presenting lies regarding dual nationals in the Rouhani administration. In return, Javad Karimi Ghodousi, head of the Investigation and Probe Committee, said he would release the list of dual nationals prepared by his committee.

The list was published that same afternoon and included the names of various politicians, including the president, several ministers, governors, deputy ministers and other officials. The published list, however, included the names of only 71 individuals, not 210. The released list also provided no supporting evidence for the allegations made against each individual on the list. What is more important is that on July 31, even the judiciary dismissed the report as lacking the needed substance and evidence.

Thus, the hard-liners seem to have lost one of their main cards against the administration and Iran’s moderates. In recent years, Iranian Supreme Leader Ayatollah Ali Khamenei has repeatedly warned about the dangers of foreigners infiltrating the country and as such the opposition had viewed the issue of dual nationals in the administration as a key example of this infiltration. And hard-liners did succeed in gaining the approval of a law to ban the employment of dual nationals as managers.

The key question now is what the fallout will be from this failed effort by the hard-liners. There will likely be no effect on the fate of the dual nationals who have already been detained for espionage, as the main charge against them in Iran’s judiciary is spying and not having dual nationality. It also may have little to no impact on the future detention of dual nationals in Iran.

The opposition does not seem to be too concerned about losing this card as they have others for bringing down the administration. While the lack of evidence is a cause for cheer for Rouhani government officials, this is not enough for them to let their guard down. Not to mention the responsibilities they already bear over the uncertain fate of the Iran nuclear deal or the country's major economic woes, which are enough to bring any administration down.

The case of dual nationals in the administration had a controversial beginning and ending. Although the opposition has been shown to have a relatively empty hand in this matter, the reality is that these claims, since they were initially made four years ago, have helped the opposition create obstacles for the Rouhani administration, and the headaches it has caused will never be compensated for.