Six years after it was first proposed, will Iraq form top policy council?

Iraqi political leaders have reintroduced the idea of a Supreme Strategic Policy Council, and a law calling for its formation now has the support of most parliamentary blocs. 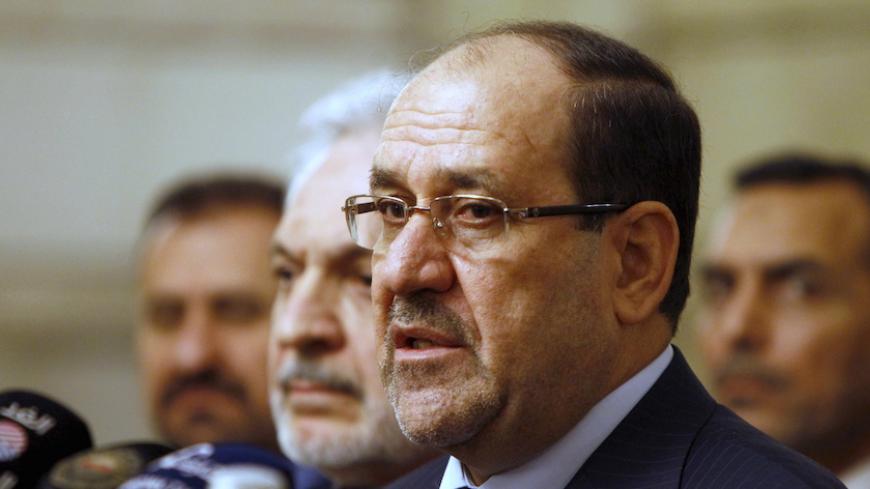 BAGHDAD — The idea of forming the Iraqi Supreme Strategic Policy Council has re-emerged nearly six years after first being put forward. Back then, the idea was part of what was called the Erbil Agreement in 2010, upon which the second government of Nouri al-Maliki was formed. However, political differences led the parliament to fail to form the council under the reasoning that there is no constitutional provision for it.

There have been recent discussions between parliamentary blocs to prepare a draft law on the Strategic Policy Council, following the announcement by Maliki on Aug. 23 that an agreement has been made with the Patriotic Union of Kurdistan (PUK) to put the proposal back on the table.

During the meeting with PUK leaders, Maliki said, “We discussed what we had already discussed in the presence of President Fuad Masum regarding the formation of the Strategic Policy Council, which would bring together the leaders of the country and serve as an advisory board for the public institutions but not replace the constitutional institutions.”

Saadi Ahmad Bira, a member of the PUK's political bureau, said, “The main aim of our visit is to participate in the [preliminary] meeting, which is supposed to produce a policy council with political powers able to issue decisions regarding strategic issues.”

The Strategic Policy Council is supposed to include the president of the republic, the prime minister and parliament speaker, in addition to the head of the judiciary and the leaders of parliamentary blocs. Its main mission is to draw the country’s national policies, discuss contentious issues and find solutions, although its recommendations are to remain “advisory” and not binding for the constitutional authorities.

Practically speaking, the council’s decisions are likely to be effective since its members are the country’s leaders and decision-makers.

It is interesting that Maliki’s parliamentary bloc, the State of Law Coalition, is the party promoting the proposal of the strategic council, stressing the importance of its formation after having been the reason behind its disruption in previous parliamentary sessions. At that time, it was decided that Iyad Allawi, the head of the Iraqi List, would chair the council in 2010.

Among the most contentious issues surrounding the previous policy council proposal was the requirement that ministers introduce draft laws to the council rather than present them before the Cabinet, 10 members of parliament or one of parliamentary committees.

In an interview with Al-Monitor, parliament member for the State of the Law Coalition Iskandar Watout talked about the coalition's change in position regarding the council. “The previous objections were not about the idea of the policy council but rather regarding the proposed legal basis for said council, which was not in line with the constitution on many levels,” Watout said.

He added, “Today, there is an absolute need to form the council as the country has no unified foreign policy or vision [shared by all parties in the government]. Thus, the formation of said council, including the country’s leaders to discuss general issues on a regular basis, has become imperative.”

In contrast, the Kurdistan Democratic Party, headed by Kurdistan Region President Massoud Barzani, expressed some reservations on the formation of the council. Parliament member Abdul Kada Mohammed explained the party's point of view to Al-Monitor, saying, “We accept the enactment of the law on the strategic council provided that such a council would be temporary — for one electoral term — without overstepping the powers of the existing state institutions.”

He added, “The council’s role ought to be advisory, providing advice and guidance to the Iraqi government, contributing to proposing laws to parliament that ought to be agreed and approved by the blocs’ leaders on the council.”

Head of the Sadrist movement Muqtada al-Sadr has not expressed optimism on the formation of the council. Commenting on a question by one of his followers on Aug. 16, Sadr said, “Corrupt people produce nothing but corruption,” while Ammar Hakim, the head of the Supreme Islamic Council, was the staunchest supporter of its formation. Parliament member for the Supreme Islamic Council Habib al-Tarfi told Al-Mada Press Aug. 28, “The time has come to balance the executive and legislative powers and prevent them from mood swings.”

The draft law on the formation of the Strategic Policy Council is expected to pass, as most parliamentary blocs are now supporting the idea.

In light of Prime Minister Haider al-Abadi’s inclination toward a technocratic government reshuffling under popular pressure and the increasing demands to put an end to the quota system, political parties (especially parliamentary blocs) have started losing their grip over the state through political deals and agreements as well as the quota system that has hampered the government since 2003.