Iraq’s parliament appears to play a largely superficial role, while political blocs and alliances make the decisions that matter. 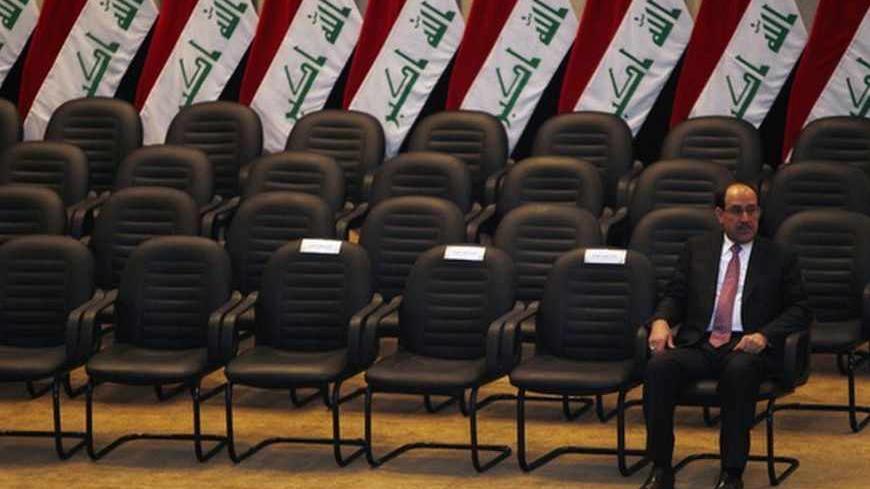 Iraq's Prime Minister Nouri al-Maliki waits to take an oath at the house of parliament in Baghdad Dec. 21, 2010. - REUTERS/Saad Shalash

The main political leaders in Iraq would rather not involve themselves in a healthy parliamentary life.

Of course, the Iraqi parliament convenes on a regular basis, and votes without problems on procedural and formal laws, such as joining treaties. However, decisions on laws related to political processes are made or delayed by leaders of political parties.

Leaders of blocs still refuse to use electronic voting to know exactly how their deputies voted. There have been disagreements on this issue within the parties themselves. The Iraqiya List dismissed parliament member Alia Nassif, and the Rule of Law coalition dismissed parliament member Jawad al-Bazouni for taking positions that differ from their blocs. In addition, sample votes of deputies are constantly sent to party leaders, and parts of the deputies' salaries go to the parties, a condition for their nominations to the lists.

The number of parliamentary bloc leaders who lead their blocs and decide on their behalf in matters small and large can be counted on one hand. Most of the parliamentarians content themselves with a show of hands when it's time to vote, based on decisions made in advance.

This might be a relatively normal approach regarding major issues, but is problematic when a deputy becomes merely an echo of his leader. One example is the resignation of  Deputy Speaker Qusay al-Suhail from his post after refusing to carry out the orders of his leader, cleric Muqtada al-Sadr, head of the Al-Ahrar bloc, to submit cases involving alleged corruption to parliament. He later rescinded his resignation in response to a request by Kazem Haeri, a residential cleric in Qom, Iran.

Iraq's leaders can be classified according to various categories. Some are preoccupied by executive positions — such as Nouri al-Maliki, prime minister and leader of the State of Law Coalition, and Massoud Barzani, president of the Kurdistan Region of Iraq and leader of the Kurdistan Alliance. Others do not attend parliament sessions, despite being members of it, such as Ayad Allawi, the leader of the Iraqiya List. Meanwhile, Sadrist Movement head Muqtada al-Sadr and leader of the Supreme Islamic Council of Iraq Ammar al-Hakim make the decisions of their blocs from outside legislative and executive bodies, and assume the role of spiritual and party leaders at the same time.

Parliamentary blocs hold meetings with their leaders to brief them on political developments, according to which positions on proposed laws are determined. But leaders do not have full access to all discussions that take place at parliament and within parliamentary hallways and committees, or detailed knowledge about the positions of other blocs. This facilitates convergences during discussions on laws. Thus, members of a certain bloc decide to delay passage of a law until consulting with their leader, and often return with a new position, which pushes another block to follow suit. This makes parliamentary settlements a very complicated task, and turns cases into deals between the individual leaders.

All this has turned the Iraqi parliament into a scene for junior actors, where they hold press conferences, escalate their stances and show off their rhetorical capabilities. This is far from the active production of laws and certainly not the scrutiny that is supposed to be the main task of the legislature.

There are nearly 40 laws that, as a whole, represent the essence of any viable political system. Yet, they are still waiting on the decision of the five leaders. Most prominently among these are those regulating the peaceful transfer of power, the relationships between the authorities and the distribution of wealth. Iraq’s Constitution identifies general steps for the transfer of power. However, it neglects the details, and the legislative system in Iraq has failed to plug the loopholes in the Constitution.

In Article 140 regarding the disputed areas, the Constitution sets Aug. 31, 2007 as the deadline for the relevant committee implementing this paragraph. It, however, have also not yet finished its work.

On June 14, 2010, Iraq witnessed a monthslong constitutional vacuum when parliament, in its first session after the elections, failed to elect a speaker as stated in Article 55 of the Constitution, which stipulates,  "The Council of Representatives shall elect in its first session its speaker, then its first deputy and second deputy, by an absolute majority of the total number of council members by direct secret ballot."

As a solution to this crisis, the parliamentary blocs kept that session open until November of the same year, until the five main leaders concluded their consultations, which ended with the deal of forming Maliki’s second government and choosing a parliament speaker, prime minister and president.

The question that has circulated in political corridors for some time is whether keeping the first parliament session open for an undetermined time is legitimate. Moreover, is there a risk that this emergency solution could be transformed into a permanent rule that is repeated in the 2014 elections? This first occurred in the 2006 elections, when the first parliament session remained open for 41 days.

So far, parliament has not addressed this constitutional loophole, just as it did not address others, some relating to its monitoring role. Its failure to summon executive officials for hearings or questioning lies primarily in its failure to enact laws that delineate binding mechanisms for such summonings. This constitutes the basis of communication and interaction between parliament and government, under Iraq's parliamentary system.

The same applies to innumerable examples about an Iraqi parliament that practically handed over the legislating keys to leaders from outside, and accepted the role of secondary actor in the political decision-making hierarchy in the country.

On Aug. 5, 2013, Sadr decided to retire from political life, as a punishment to his supporters.

After announcing that decision, Iraqi parliament Speaker Osama al-Nujaifi himself demanded that Sadr retract this decision.

Nevertheless, Hanan al-Fatlawi, a parliament member in Maliki's State of Law Coalition, questioned what Sadr’s retirement from political life meant, asking, “Is he a president, a prime minister or even a minister to [be able to] retire?”

This statement angered Sadr’s supporters, who considered it disrespectful of their spiritual leader. Yet the motives that pushed political and parliamentary forces to call Sadr to retract the decision to retire from political life are that the departure of Sadr would lead to a division or disagreement in his political bloc, or restore power to its military wing, the Mahdi Army.

The fact is, the political party in Iraq reflects the image of its leader. Therefore, there are conflicting speculations about the fate of the Patriotic Union of Kurdistan in the absence of its leader and the president of Iraq, Jalal Talabani. For this reason also, Maliki's State Law Coalition seems committed to nominating its leader for a third term. It will inevitably be unable to agree on an alternative to Maliki. The same applies to all other parties.

It should be noted that party leaders in Iraq belong to historical backgrounds characterized along moral or spiritual lines. In the absence of a normal partisan life or laws regulating political parties, the leader becomes a symbolic father to his supporters, community and party. He is both the king and the maker of kings at once.

The Iraqi parliament will not assume its natural role in political life, and will not get rid of the role as secondary representatives unless the parliamentarians become the voters’ representatives rather than a shadow of their party’s leader. An election law that is sound, represents an honest expression of the voters' will, includes open electoral lists and distributes electoral districts in a way that allows voters to select their candidates as individuals, and not just as members of parties, can help the Iraqi parliament restore its role and achieve its goals.