Iraqi political forces are squabbling while each tries to shape the new electoral law in a way that best suits its political clout. 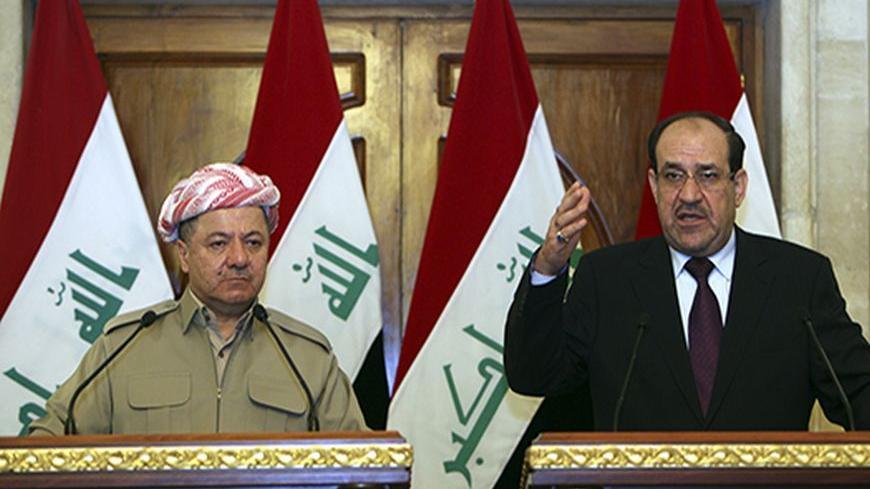 With the approach of every Iraqi election season, the country plunges into widespread controversy about the election law and about how it should be amended. The threats between the various political blocs escalate, with some hinting that they will boycott the election. These debates have typically ended by either returning to the previous law or by a political settlement that guarantees the interests of all the parties.

That scene happened during the past few weeks as Iraqi political forces tried to amend the law that would govern the 2014 parliamentary elections because there was not a fixed electoral law in Iraq, allowing parliament the right to change the law each electoral season or to amend earlier laws.

President of the Iraqi Kurdistan region Massoud Barzani said that the Kurdish parties might boycott the elections if their suggestions about the law were ignored. The Kurds have proposed to distribute the “compensatory seats” according to the voters’ proportions and to make Iraq a single voting district. The Kurds believe this will give them additional seats because of the increase in percentage of votes in Kurdish governorates compared to Arab ones.

The State of Law coalition, led by Prime Minister Nouri al-Maliki, proposed using the 2010 law again because it does not guarantee the distribution of votes among the greatest winners, which the bloc benefited from in the 2010 elections when it received 89 seats of the 325 total in parliament.

Other blocs, such as the political current of Shiite leader Muqtada al-Sadr, insist on using the provincial election law that was used for the provincial elections in April, which used the so-called Saint Lego method for calculating votes. These blocs feel that it serves the smaller forces, as proven by the elections last April when the Sadr movement, the Supreme Council and local forces successfully securing control of local governments, most significantly in Baghdad and Basra from the State of Law Coalition.

Other suggested amendments include granting parties the right to replace their deputies if they disobey party decisions. There’s also a debate about the minimum votes an electoral list needs to compete for the compensatory seats.

Al-Monitor received a copy of the electoral law and the clauses where there’s a disagreement from the parliamentary Legal Committee. The law consists of 44 articles, 10 of which are being debated. There are also five proposed articles to be added, and there are significant disagreements over those articles too.

A number of articles seem problematic and the differences around them are fundamental, namely these six points:

1. The method of calculating the votes in Article 14; there are three proposals for this, including one that calculates the votes according to the D’Hondt method and that the surplus votes be divided among the strongest winners. The second proposal is to calculate the votes according to the Saint Lego method, which distributes surplus seats to the strongest losers. The third proposal is to distribute the seats on the lists by subtracting the number of valid votes that each bloc receives.

2. There is a disagreement on Articles 11 and 15, which set the seat quotas for the minorities. The Kurds, along with other ethnic and religious minorities are demanding increasing the percentages allocated to minorities, whereby a new quota is given to the Yezidis, Shabak and Armenians, thus increasing the number of parliamentary seats to 340, 16 of which are for minorities. The Iraqiya, Sadrist, and other blocs prefer keeping the number of seats at 325. Most parties agree that each province be a single electoral district and that its number of seats be proportional with its population. But the Kurds disagree with that and want Iraq to be a single electoral district.

3. There is disagreement about how and where the votes are counted. Some want the electoral commission to open a number of centers to count the votes. Others want the votes counted at the polling stations, each of which will announce its results.

5. There is a dispute over a new article that sets the minimum of number of votes required for a list to have a parliamentary seat. Some want that number to be 1.5%, others 0.5%.

6. There is an article on which there seems to be an agreement because no one is proposing to amend it. That article stipulates that political blocs be given the right to replace deputies that do not meet the “electoral threshold,” but who have succeeded in reaching parliament via the votes obtained by their political blocs.

Regarding how the seats are distributed, Kurdish forces think that the voting participation rates in the Iraqi Kurdistan region are higher than in the rest of Iraq. So, they want to use that advantage by making Iraq a single electoral district, which would give the Kurds more seats. There is also a disagreement about how the votes are calculated and how to distribute the seats for which the vote threshold was not reached.

It is clear that the Iraqi forces are squabbling over the election law not because of differing philosophies about election laws in general or about how to protect the rights of voters and their voices.

Everybody agrees that a candidate must secure a certain number of votes to become a deputy. The dispute is because a large number seats go to candidates who have not met the voting threshold. Some haven’t even gotten 500 votes and yet managed to reach parliament by the votes obtained by their electoral bloc after other lists, whose candidates approached the threshold but didn’t meet it, were excluded.

That odd matter prompted the Federal Court in November 2012 to appeal the law according to which the 2013 provincial elections were held. That law was a carbon copy of the 2010 parliamentary election law before being amended to use the Saint Lego method in distributing the votes. The head of the Federal Court Medhat al-Mahmoud said that the “decision came in order to preserve the voters’ votes and to protect the general constitutional principles.”

The complex way the votes are calculated helps the major parties retain or increase their parliamentary shares by using the votes of smaller parties. Ten years after the “change” in Iraq and after four elections (two parliamentary and two local), the Iraqi political forces have not yet adopted less complex voting methods.

The core of the problem is apparently two-fold:

1. The insistence of the political forces on a system whereby each Iraqi province is an electoral district.

2. For the election to be for the benefit of a list in that district and one runoff candidate to be chosen from within that electoral list.

A new approach to the electoral law, some of the parties fear,  might allow the rise of other parties and independent figures, which is considered a red line for the forces that dominate parliament. The Sunni, Shiite and Kurdish political monopolies consider the current division of power to be eternal.