Prince Salman gets jump on G-20 as Saudi 'Mr. Everything' tours Asia

Deputy Crown Prince Mohammed bin Salman is set to be the youngest representative at the upcoming G-20 summit, his most significant step on the global stage to date, but can the spotlight on "Mr. Everything" distract from Yemen? 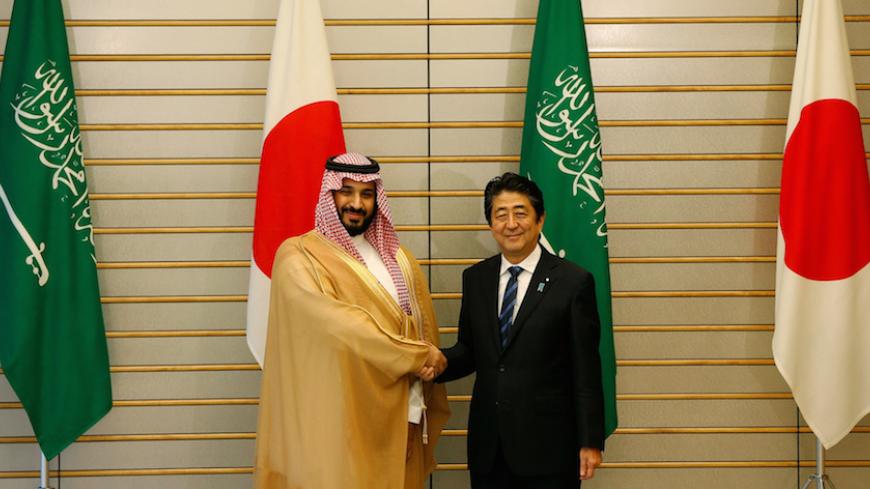 Saudi Deputy Crown Prince and Minister of Defense Mohammed bin Salman is representing his father at the Group of 20 summit in China on Sept. 4-5, another indication of the 31-year-old son's pivotal role in the kingdom. "Mr. Everything," as he is now called, is King Salman bin Abdul-Aziz Al Saud's most trusted adviser and most critical intermediary with other foreign leaders.

The prince began his trip to the G-20 with a brief stopover in Islamabad to meet with Prime Minister Nawaz Sharif and Chief of Army Staff Gen. Raheel Sharif. Saudi relations with Pakistan, a traditional ally, have been disrupted since Pakistan refused to join the Saudi-led coalition fighting in Yemen against the Houthi rebels. Pakistan's opposition to the war in Yemen enjoys widespread support in the country. The Pakistani parliament voted unanimously against sending troops to fight. But Pakistan still has a thousand advisers in the Saudi military and has participated in military exercises inside the kingdom in the last year.

The prince then made a bilateral visit to China, Saudi Arabia's largest oil market. Trade between the two peaked at almost $70 billion in 2014, before oil prices dropped. The Saudis want China to be a major investor in the prince's Saudi Vision 2030, an ambitious plan to reduce the kingdom's dependence on oil exports. He signed 15 agreements on economic and cultural ties with the Chinese during the visit.

China is also the source of Saudi Arabia's intermediate-range ballistic missile force, the kingdom's strategic deterrent weapon that needs updating. The CSS2 missile system, provided by China in a secret deal negotiated by Prince Bandar bin Sultan, the Saudi ambassador to the United States in the mid-1980s, is aging. As defense minister, Mohammed bin Salman is interested in keeping the Saudi deterrent capabilities, especially against Iran, credible.

China has also sold drones to the Saudis, who are using them in Yemen. En route to Beijing, the prince said China could increasingly become an "alternative" to the United States and Europe for arms purchases if the United States and European Union restrict arms sales to the kingdom. Last month, The New York Times called for a hiatus in arms sales to Saudi Arabia because of the Yemen war. The editorial got considerable attention in the royal family. The Saudis are well aware that their military and those of their Gulf allies are totally dependent on US and European arms supplies and maintenance support.

After the bilateral talks in Beijing, the prince visited Tokyo. Japan is also a major export market for Saudi oil. The prince is also a fan of Japanese culture and honeymooned in Japan. He wants the Japanese to be involved in the Saudi Vision 2030 projects, especially the sale of shares in ARAMCO when it opens to private investors. He is meeting with the emperor to underscore the importance of the relationship.

The prince will be the youngest person in the obligatory G-20 group photo next week. His meteoric rise to power in the kingdom is unprecedented, his accumulation of responsibility extraordinary. Attending the G-20 is his most significant step on the global stage to date.

His very public spotlight in China will inevitably fuel speculation that his father will choose him as his immediate heir sooner or later. King Salman has already removed one crown prince (Muqrin), and he could remove Crown Prince Mohammed bin Nayef to move his son up if he wants to. For now, the 80-year-old king seems to want to maintain family harmony.

Mohammed bin Salman undoubtedly wants to be king someday, and the G-20 trip burnishes his credentials. But his signature foreign policy move, the Yemen war, is far from successful. The war is now a year and a half old with no end in sight. The Houthis sent a senior delegation to Baghdad last month to discuss opening relations with Iraq. The Iraqi foreign minister met with them and called for Saudi Arabia to replace its ambassador in Baghdad for interfering in Iraq's internal affairs.

The two Shiite governments share a common hostility toward the Saudis and a common friendship with Iran. By courting Iraq, the Houthis are very deliberately baiting the kingdom. A Sanaa-Baghdad-Tehran axis is Riyadh's worst nightmare. Operation Decisive Storm, the original code name for the war, was intended to prevent the spread of Iran's influence in the Arabian Peninsula. The king and prince still have yet to find a satisfactory answer to their Yemeni conundrum.