The kingdom’s largest military exercise ever was a signal to both Washington and Tehran. 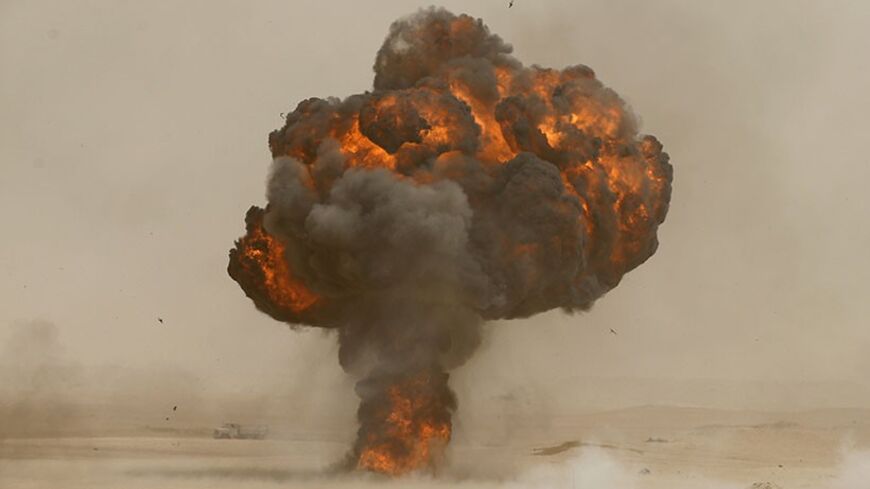 Saudi Arabia staged its largest-ever military exercise this week to demonstrate its capability to defend itself against its northern Shiite neighbors. The guest list for the event was the most potent symbol of Saudi power, bringing together its Gulf allies with Pakistan and its nuclear shield.

According to the Saudi media, the exercise, code-named Abdullah’s Shield, involved 130,000 Saudi troops. The maneuvers were held in the kingdom’s Eastern province at King Khaled Military City, in Hafr al-Batin, facing Iran and Iraq, and were timed to coincide with the ninth anniversary of King Abdullah’s ascension to the throne.

The highlight of the exercise was a military parade for the assembled guests during which the Saudis publicly displayed for the first time their Chinese CSS-2 intermediate-range ballistic missiles. Secretly purchased in 1987 during the Iran-Iraq War, the aging missiles have a range of 2,650 kilometers (1,646 miles). In China, they are equipped with nuclear warheads. The missile deal was arranged by Prince Bandar bin Sultan, then Saudi ambassador to the United States, and caused an uproar in US-Saudi relations after US intelligence found them being deployed in hardened missile silos in the Saudi desert. Bandar assured Washington they did not have nuclear payloads.

Crown Prince and Defense Minister Salman bin Abdulaziz presided over the exercise and the parade. Prince Mutaib, King Abdullah's son and National Guard minister, and Interior Minister Prince Muhammad bin Nayef joined Salman. Foreign guests included King Hamid of Bahrain and the crown prince of Abu Dhabi, Muhammad bin Zayed, as well as senior officials from Kuwait and Oman. Only Qatar was missing from the stage, a sign the Saudi-Qatari rift is not over.

The pre-eminent guest was Gen. Raheel Sharif, the Pakistani chief of army Staff. Sharif is the most important military commander in Pakistan and the man who controls the fastest-growing nuclear arsenal in the world. The Saudis and Pakistanis are well-aware that rumors, which the two helped stoke, have circulated for decades that Pakistan has committed to providing nuclear warheads for the CSS-2 missiles. The Pakistani press highlighted that Salman had personally invited Sharif to the kingdom when the crown prince visited Pakistan earlier in the year. On television, Sharif was shown sitting next to Prince Mutaib, a sign of royal favor.

The Saudis wanted to signal several things with the exercise and their guest list. First is a message of deterrence to Tehran and Baghdad. The Saudis see the two Shiite-dominated states as existential foreign threats to the kingdom and view the increasingly tight alliance between them as a clear and present danger. Such Saudi commentators as former intelligence chief Prince Turki bin Faysal have been outspoken in warning that if Iran obtains a nuclear capability, Riyadh will have to develop its own. As one of the architects of the Saudi-Pakistan alliance in the 1970s and 1980s, Turki’s remarks implicitly and deliberately signal where and how Riyadh would acquire its deterrent.

The United States is another intended recipient of the Saudi missile message. Saudi media have been restrained in their commentary on President Barack Obama’s visit to the kingdom last month. The discussions during Obama's trip have been characterized as candid and offering mutual clarifications. This suggests King Abdullah and his advisers were less than fully satisfied. The subsequent collapse of the Israeli-Palestinian peace talks has undoubtedly further undermined the king’s confidence that Washington is moving to resolve the region’s problems effectively and decisively.

US-Saudi relations are far from broken, but they remain strained. Riyadh wants Washington to be tough on Iran and to keep the sanctions regime in place even if a nuclear deal is reached. It fears Iranian mischief-making and subversion as much as nuclear blackmail. Abdullah remains astonished at how naive the United States was in promoting Shiite majority rule in Iraq after the 2003 invasion, an error in judgment the king finds irresponsible to this day. He likes to remind American visitors that he warned against it for years before the war.

The Saudis are also disappointed that Washington is not more eagerly embracing the military dictatorship in Egypt. Field Marshal Abdel Fattah al-Sisi had been a military attache in Riyadh and a Saudi favorite. The Saudis want Washington to back his regime fully, not half-heartedly. They, the United Arab Emirates and Kuwait have already committed billions to keeping Sisi in power.

Saudi-American cooperation remains strong on other issues despite the strains. The two are currently engaged in a major offensive against al-Qaeda in the Arabian Peninsula in Yemen. Both see that organization as a serious threat and want to eliminate its leadership. Cooperation on arms supply to the Syrian opposition has apparently also improved. Nonetheless, the military exercise and parade in Hafr al-Batin vividly underscore the kingdom’s inner circle of allies. No partner is more important than Pakistan for the royal family.