Saudi Arabia has been pulling out the diplomatic stops in an effort to contain Iran in anticipation of what it sees as an unfavorable nuclear deal between the West and the Islamic republic. 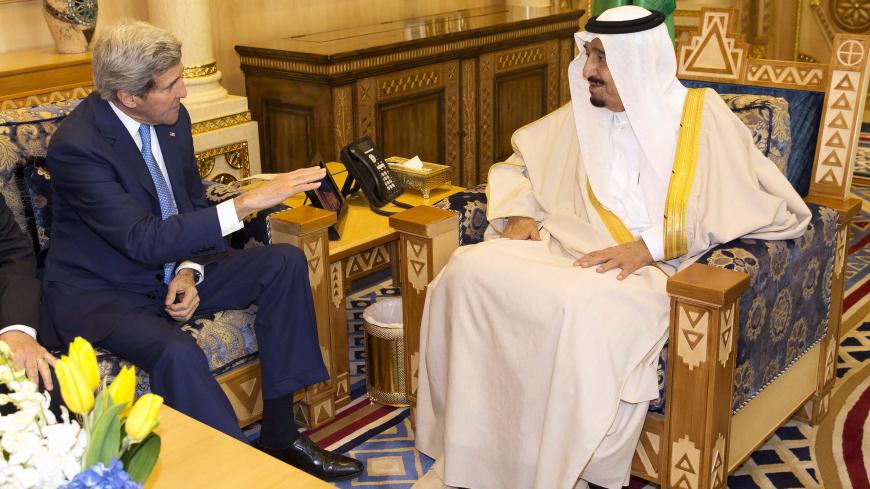 US Secretary of State John Kerry (L) meets Saudi King Salman bin Abdul-Aziz Al Saud at Diriyah Farm in Diriyah, March 5, 2015. Kerry met Gulf Arab foreign ministers in Riyadh to brief them on progress in the nuclear talks with Iran and offer reassurance that any deal would not damage their interests. - REUTERS/Evan Vucci

Saudi Arabia is quietly preparing for an international nuclear agreement with Iran that it fears will rehabilitate its Shiite Persian rival. King Salman bin Abdul-Aziz Al Saud's approach eschews the public spectacle of Israeli Prime Minister Benjamin Netanyahu's speech to Congress (indeed, the Saudis don't want any association with Israel) and instead focuses on regional alliances to contain an emergent Iran.

The Saudis publicly welcomed US Secretary of State John Kerry's assurances in Riyadh last week that Washington will not accept a bad nuclear deal with Iran, and that a deal will not inaugurate a grand rapprochement between Washington and Tehran. They remain deeply skeptical about the negotiations, however, and are preparing for any outcome in the P5+1 process.

The Saudis recognize that a successful deal between Iran, the US, Russia, China, Britain, France and Germany will enjoy broad international backing and United Nations endorsement. Riyadh has no interest in being isolated in a dissenting minority with Netanyahu against a deal backed by a global majority. The royal family despises Israel, and Netanyahu is regarded as a war criminal by most Saudis. Any hint of mutual interest with Israel is unpalatable in the kingdom.

So the Saudi approach is to strengthen its regional alliances for long-term confrontation with Tehran. Most immediately, this means strengthening the unity of the Gulf Cooperation Council (GCC). It has strong allies in Abu Dhabi and Manama. In Riyadh's eyes, there are two weak links in GCC collusion against Iran: Oman and Qatar. Neither is likely to give up their bilateral lucrative ties to Iran, but Salman is pressing both to adhere to GCC unity and not facilitate Iranian subversion.

Yemen is the key GCC battlefield. The victory of the Iranian-backed Zaydi Shiite Houthis in seizing control of most of north Yemen, including Sanaa, has led the Saudis and the GCC to move their embassies to Aden, where they are trying to back the tattered remnant of the Abed Rabbo Mansour Hadi regime in south Yemen. The inauguration of Sanaa-Tehran air flights last month, a first, only underscores the extent of Iran's success in achieving a key goal in the kingdom's backyard and in its historically weak underbelly. The Saudis are on the defense in Yemen.

Egypt is Riyadh's key Arab partner. The kingdom played an important role in bringing Gen. Abdel Fattah al-Sisi to power, and Salman met him a week ago to coordinate closely on regional issues, especially Iran. Cairo is too preoccupied with its own domestic terror threat from the Islamic State (IS) and spillover from Libya's disintegration to be very helpful against Iranian machinations elsewhere, however, and is more of a liability (especially financially) than an asset, albeit one Saudi Arabia is determined to keep afloat.

The Shiite government in Baghdad is regarded as a long-lost Arab partner. The Saudis expect Iran to emerge as the big winner in the war with IS, no matter how long it takes and how bloody it is. The Saudis know history, geography, demography and sectarian affiliation favor Iran in Iraq. They believe that President George W. Bush made a colossal error in 2003 and that President Barack Obama has made an "unholy alliance" today with Iran in Iraq. The only option now is to contain the Shiite breakthrough here, too.

Syria has been lost to Iran as well, but Riyadh still hopes to oust Syrian President Bashar al-Assad. The Saudis are pouring money into the Lebanese army, as a potential brake on Hezbollah, along with the French. Salman also recently met with Jordan's King Abdullah to coordinate with Amman on Syria and with Turkish President Recep Tayyip Erdogan as well.

Riyadh's most crucial ally is Pakistan, the only Muslim nuclear weapons state. Last year, for the first time, the Saudis publicly displayed their vintage Chinese-made intermediate-range ballistic missiles — the only ones they have that can reach Tehran — at a military parade. In the reviewing stands was Pakistani Chief of Army Staff Gen. Rahul Sharif, the man who controls Pakistan's nuclear arsenal. It is the fastest growing nuclear arsenal in the world, and the Saudis have been helping to pay for its development since the 1970s. It was a very calculated signal.

Salman, in late February, summoned the Pakistani prime minister, Nawaz Sharif, to Riyadh. The highly unusual and urgent public invitation was linked in the Pakistani press to "strategic cooperation" against Iran. Salman visited Islamabad a year ago as crown prince and gave Sharif a $1.5 billion grant to reaffirm the Saudi-Pakistani strategic accord. Sharif spent three days in the kingdom last week in response to the king's invitation. He received a royal reception.

One immediate result of the talks is a plan for Pakistan to move its embassy in Yemen to Aden.

The speculation in Islamabad is that the king sought assurances from Sharif that, if the Iran negotiations produce either a bad deal or no deal, Pakistan will live up to its longstanding commitment to Saudi security. That is understood in Riyadh and Islamabad to include a nuclear dimension.

Sharif also visited the kingdom in January of this year. He was apparently told that then-King Abdullah bin Abdulaziz Al Saud was at death's door, and Sharif came to pay his respects and meet with Salman before the king died. No other leader was given this advance notice — another sign of the critical importance of the Saudi-Pakistani axis.

​The exact details of what the Pakistani nuclear commitment to the kingdom includes is, of course, among the most closely held secrets of our world. Both Riyadh and Islamabad prefer to maintain ambiguity and deniability.

The Saudis have not given up on Obama; the United States is still their oldest ally. Washington is too important to irritate with speeches. The Saudis prefer a more subtle approach.